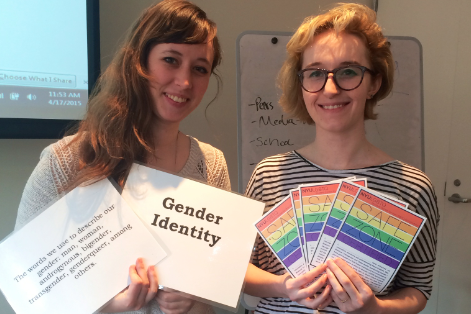 Imagine being an LGBT student on an American college campus in 1969, in fear to come out because of gay bashing, police brutality, and even murder.

Now picture being that student today: educating others on Allyship and microaggressions.

“This is a liberation, a really different moment in lesbian and gay political possibilities,” said Ann Pellegrini, the author of “Love the Sin: Sexual Regulation and the Limits of Religious Tolerance”. “It went from ‘don’t arrest us for wearing women’s clothing’ or ‘don’t arrest us for having sex with a person of the same sex’ to ‘we want the law to regulate us in our intimate relationships’.”

Pellegrini said she is confident that LGBT students are in a more tolerant environment than they would have been years ago. She attests this tolerance to the legalization of same sex marriage.

“It’s really different to have marriage be the thing,” said Pellegrini. “This was not what the people were rioting about at Stonewall, they just wanted the police off their backs.”

The Stonewall riots, which were demonstrations by the gay community against a police raid in 1969 in Greenwich Village, are far from what LGBT students face today in New York City.

Since 2004, when Massachusetts was the first state to legalize same sex marriage, there have been 71,165 same sex marriages according to the Pew Research Center. In correlation, the Human Rights Campaign reported that 75 percent of LGBT youth say that most of their peers do not have a problem with their identity as LGBT.

This percentage is illustrative of how far the LGBT community has come since the 1960’s.

But according to a New York University graduate of 2009 from Deal, NJ, who would not give his name because of fear of discrimination, there is still a lot of work that has to be done. He said gay students were mocked.

“I thought that out of anywhere in the world to go to school, NYU would be the easiest to come out because there was a culture of acceptance in the village and New York City as a whole,” he said. “There were gay closeted people at NYU because they were afraid to come out and I know this because I was one of them.”

One of the ways that New York University tackles the difficulties that LGBT students are confronted with is by creating a safe environment at the LGBTQ center.

“We talk a lot about microaggressions and we have a lot of programming that takes on these kinds of conversations,” said Leah Miller, a first-year student at NYU and volunteer for Ally Week, a national youth-led effort that empowers students to stand up against anti-LGBT bullying.

She defined microaggression as comments or jokes that don’t necessarily have a mean or malicious intent at all, but the impact that they have perpetuates sexism, homophobia and transphobia.

“For example with LGBTQ, if someone were to say ‘oh do you have a boyfriend’ if you were a woman or ‘when are you going to get married and have kids’ assuming things about peoples lives based on norms,” she said.

Another way that New York University works to stop intolerance against LGBT students is through Bystander Intervention which teaches non – LGBT students who are present during emergency situations how to successfully intervene and stop any acts of violent discrimination.

“Our training notes hate speech and discrimination among a number of other examples of scenarios where there may be opportunities to intervene to help others,” said Caroline Wallace, Director of Health Promotion at NYU. “The purpose of the training is to let NYU community members know they can play a role in mitigating or avoiding negative outcomes around a number of topics.”

But New York University doesn’t only want to train their students to fight against anti-LGBT bullying. They also want to educate them and find out where these negative and positive messages are coming from.

Claire Mahany and Piper McCain, outspoken peer educators for the LGBT Center and volunteers for Ally Week, asked their students during a Safe Zone class, a training program a the LGBTQ center, how they internalize the messages they see in their daily lives while on campus.

“I would say that something that stood out for me was meeting someone that was out and proud and not apologetic for who they were,” said Tom, a participant in Safe Zone that would only go by his first name in fear of intolerant backlash. “I think having that type of role model makes a difference.”