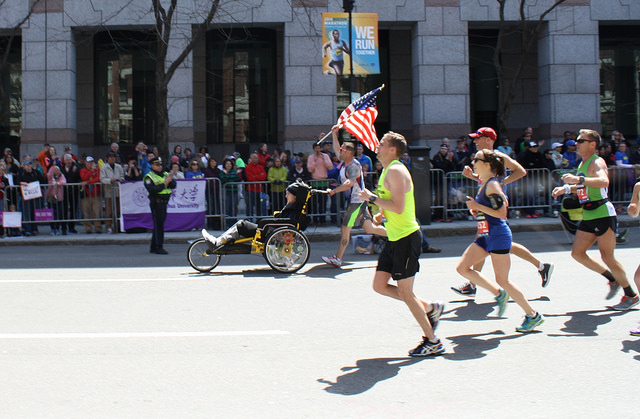 A flag wielding runner pushing another marathon participant in a wheelchair leads a pack rounding out their 26th mile at the Boston Marathon. By Zoe Lake

The morning of April 20 brought new hope to the city of Boston. The long and harsh New England winter had finally loosened its grip, and the 118th Boston Marathon was set to begin in Hopkinton, Mass., with the Elite Men at 10 o’clock sharp. Bostonians near and far, in body, and in spirit were primed to take back the city just over a year after a tragic act of domestic terrorism shook its very foundation.

The early atmosphere was excited, but jittery. Participants and well wishers alike worried that new security measures designed to ensure their safety would cause confusion and stress, interfering on a day that has historically been filled with joyous traditions and ceremony. 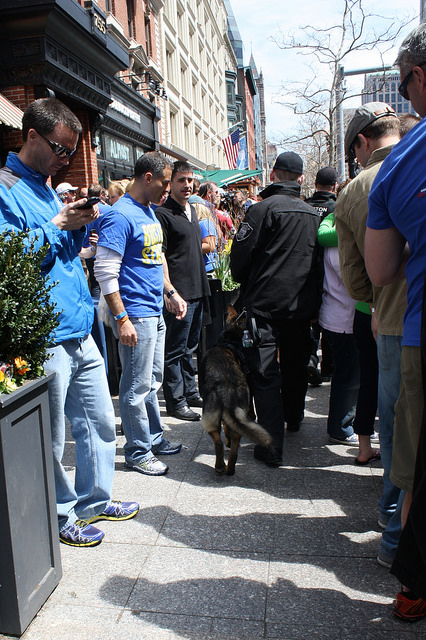 A wide berth was allowed by spectators for bomb-sniffing dogs, a new addition to Boston Marathon sidelines this year in the wake of last year’s tragedy. By Zoe Lake

The Tough Ruckers, a military contingent that usually makes the 26.2-mile trek wearing full military rucksacks would not be allowed to carry backpacks this year. Bandits, or unofficial runners, (oftentimes those jumping in with a friend or family member for a leg of the race, or runners for unofficial charities), would also be banned. The Boston Athletic Association, FBI, Boston Police, and surrounding municipalities did their best to quell anxieties; assuring all concerned, that Boston would be the safest place in the world come Marathon Monday. Police officials said it was not their desire for example, to restrain Wellesley College girls from kissing runners along the infamous mile 13 “Scream Tunnel,” or to upend Boston College students from handing runners beers at mile 21.These customs boasting years of marathon tradition.

Cheryl Fortier, 30, of Cambridge, Mass., inspired by the resolve of the marathon victims and the spirit of the city of Boston, lost 150 pounds in order to participate in her first marathon this year. She was among the 32,000 that took to the course Monday, and shared the anxieties of many over new logistics.

“I’m a bit nervous,” she confessed the day before the race, “It’s a lot of logistics. The BAA has been sending me about five emails a day, you have to check your gear, you have to bring an id, you will be searched, on and on. It’s a lot to think about when you’re about to run a marathon.” 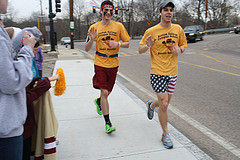 When the BAA announced the exclusion of bandit runners from the race this year, the BCCSMT staged their own marathon, a week before the race to raise money for the Campus School for the severely disabled. By Zoe Lake

Officials began planning for the logistical nightmare of this year’s marathon shortly after the events of last year. With a security scare involving a backpack abandoned near the finish-line by an unhinged performance artist just a week before the scheduled event, many worried how smoothly things would run the day of. But on the morning of Patriot’s Day, the little city with a big heart rose to the occasion. One million spectators many sporting “Boston Strong” apparel flooded the city, complying readily with the obvious  security along the marathon route and cheering spiritedly for runners as they passed by.

Cori Adams of Windham, N.H., didn’t seem phased by the increased police presence. She and her husband Rick traveled from their home all the way to the finish line with their three small children to watch and cheer. 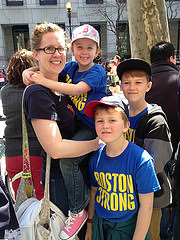 Cori Adams and her kids traveled from New Hampshire to watch her son’s second grade teacher complete the marathon with a broken leg. By Nidhi Prakash

“Were here to see my son’s second grade teacher Ms. Banburg who is running with a broken leg,” she said.

While spectators may not have even noticed the amped up surveillance, runners, on had a tougher time, with security at the starting line, air tight.

“Logistically it was tough,” said Mike Butler, a 10-time Boston runner from West Springfield, Mass. “It is what it is, and I respect it,” he shrugged. “A lot of the police along the route were high-fiving though. It was a painful run, but it was so much fun.”

“It was a phenomenal crowd,” he said. “From mile 21 to the finish I high-fived people the whole way.”

Spectators, audible from blocks away cheered loudly as American Meb Keflezighi became the 118th Boston Marathon Champion in just two hours, eight minutes, and eleven seconds, the first American man to do so since 1983. It was an uproarious moment for Boston. Keflezighi ran with the names of the bombing victims on his bib. Boston had triumphed.

The national anthem echoed down Boylston as Keflezighi was medaled, and runners of all ages, nationalities, and skill level began to flood the finish line. Enough people participated in this year’s run to nearly fill Boston’s iconic Fenway Park.

Past the finish line announcers seated high above the exiting participants beckoned runners via megaphones to food, Gatorade, and water stations down the street. Some good-naturedly heckled the runners, reminding them of what not to expect at the runners’ village.

“We’ve got food, beer, and water for you just up the street,” one announcer called. “Just kidding we don’t have beer! But wouldn’t that be nice! Get this guy a beer ladies and gentlemen!” he shouted, pointing a finger at an exhausted looking man who limped as he held his hands above his head.

Nearby, in the many pubs and restaurants surrounding the finish line, runners entered in droves, and just as the announcer suggested; people bought them beers.

David Christmas, 60, of Acton Mass. was one of those runners. A veteran marathoner having just completed his 17th Boston, Christmas joined friends and family as he traditionally has, at The Rattlesnake Bar and Grill for a post-marathon beer. A Narragansett tallboy waited for him, an order filled by his son, who received the request via phone as Christmas ran his last few miles—that, and another request for an update on the Sox game. 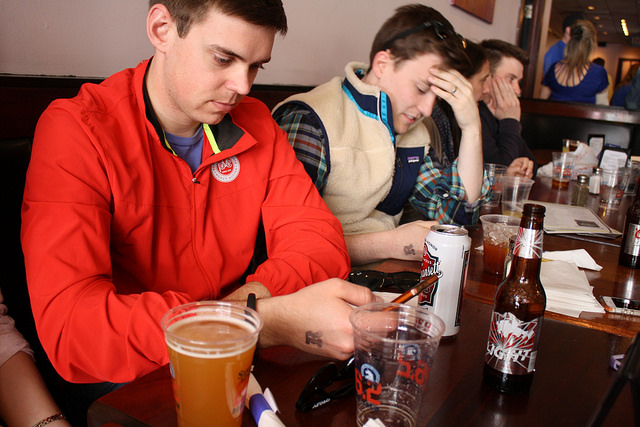 “He always wants updates on the Sox,” laughed his other son Tommy. “He’s called about three times already.”

After nearly two decades of running Boston, Christmas said despite changes to the event, this year felt like any other.

“Boston is always awesome,” he assured between congratulating other runners who stopped in, and sipping his first post race beer, (“two beers, and then I’m outside throwing up, then three more,” he laughed).”This year has probably been my most memorable, for different and better reasons than last year.” 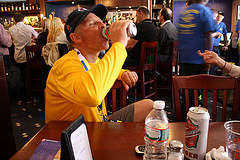 Dave Christmas takes a swig of beer after finishing his 17th Boston Marathon. By Zoe Lake.

It was at the Rattlesnake that Christmas sat last year, nursing a Sam Adams 26.2 (the special Marathon brew released every spring), when the bombs went off blocks away at the finish line. Herded out by police officers and bomb sniffing dogs Christmas realized days later that he hadn’t paid his bar tab when he left.

“So I called them up, found out what I owed, and wrote them a check,” he said.

Owner Tony Castagnozzi was touched; he has kept the check, and a note Christmas wrote, as a momento. The men embraced after the race this year laughing at the memory. 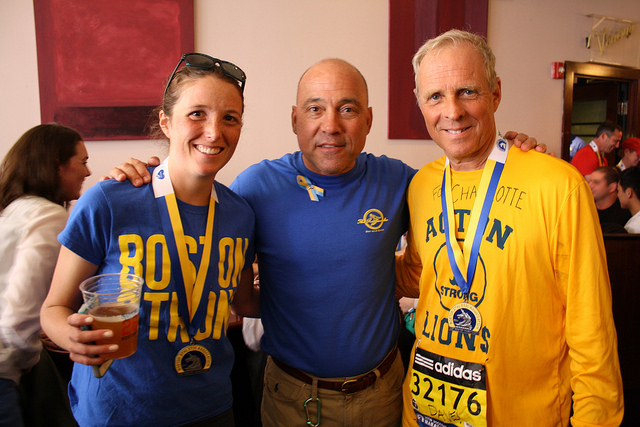 “I still have your check downstairs,” said Tony, jostling Christmas.

“How am I going to balance my checkbook?” Christmas teased back.

This was Castagnozzi’s 24th marathon at the Rattlesnake.

“The marathon is always the best,” he said.

Like many bars surrounding the finish line, the Rattlesnake attracts the same veteran runners year after year, runners who have fostered a strong camaraderie, as runners often do.

The Dempsy family of western Mass. has had two generations of runners make their way through the storied bar after the race. Kathy Dempsy gets the chills thinking about meeting friends and family there after the confusion that followed the bombing last year.

“This is the spot we always meet at,” she recalled. “It was here that my daughter turned to me and said ‘mom next year I’m doing it.’ ”

Her daughter Emily Zimmerman finished her first marathon with a beer at the Rattlesnake.

Kevin Burns, an 8-time Boston runner was cheered into the bar before he joined Christmas for a drink to remark on the race this year.

“It was just awesome,” he said. “The crowds were bigger and more energetic. The colleges were really great, BC was so good, the Wellesley girls were outstanding!”

Boston may still be mourning the loss of last years’ race, but if this year has proved anything, its that Boston will never have to mourn the loss of its traditions.

“That’s the amazing part,” said Dempsy. “Every single person in this city has a story to celebrate. We truly are Boston Strong.”