Many people will never forget the joyous occasion of planning their child’s wedding, but Ann Couch instead remembers the regret she felt putting together the slideshow for her daughter’s reception.

“I realized I didn’t have a lot of pictures of her and I when she was growing up, because I was self-conscience of my weight and I just cried and cried,” Couch, 47, of Jacksonville Ala. said.

It was another ‘ah-ha’ moment experienced five years earlier in 2003 that led Couch, then 240 pounds and a size 26, to undergo gastric bypass surgery in order to save her life. 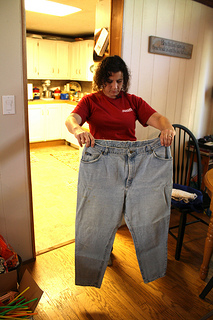 Ann Couch, 47, of Birmingham, Ala. holds up a pair of her size 26 pants from before her gastirc bypass surgery in 2003. By Zoe Lake.

“Somebody had taken a picture of me, and I was like ‘Oh my gosh!’ I looked at myself and saw the resemblance between myself and my aunt (who had died of diabetes complications),” Couch, now a size 12 and 145 pounds recalled. “I have a strong family history of heart attacks and stroke, most of my family is overweight and I thought, ‘I don’t want to do that, I’ve got a child. I want to see her grow up. I want to see grandkids.’”

A certified bariatric bypass nurse at the Trinity Medical Center in Birmingham, Couch hopes to be an inspiration to obese and overweight patients who she meets through her work as a nurse and in her involvement in pre-op education and support groups.

“Thirty-four percent of the state is considered to be obese,” Couch said, echoing statistics reported by the American Medical Association and Center for Disease Control and Prevention, “Then there are a lot of people who are severely morbidly obese, those are the ones that are over a 50 BMI.”

BMI, an acronym for Body Mass Index, is the measure of body fat used to determine whether a person is overweight or not. An average BMI is 19-24, and an obese person’s BMI is 30 or greater. In Alabama, the nation’s second fattest state, 66 percent of the adult population is overweight or obese.

The National Initiative for Healthcare Quality estimates that 36 percent of Alabaman children are obese, putting them too at risk for severe health complications such as type two diabetes, heat attacks, stroke, asthma, sleep apnea, depression, high cholesterol and cancer.

“Cancer loves big people,” Lee Schmitt, a bariatric surgeon at St. Vincent’s Hospital in Birmingham, said. Schmitt is all too familiar with the staggering statistics regarding the obesity epidemic in Alabama.

“Unfortunately, Alabama ranks high with people who are morbidly obese, and once you reach 250-300 pounds you don’t need to overeat to maintain the weigh,” he said.

Schmitt has performed over 1,400 bariatric surgeries in his career and sees everyday the extreme health risks that threaten the lives of those who are morbidly obese. Bariatric surgery, he said, saves and prolongs the lives of people for whom diet and exercise will not work.

For a person to be considered a good candidate for bariatric surgery they must have a BMI of 30+ and at least two other health complications. But the surgery is a serious, expensive endeavor.  It can cost more than $12,000.

Two years ago, 48-year old Birmingham resident and homemaker, Alisa Israel was a size 26.” She would have been an ideal candidate for bariatric surgery, but she could not afford it and wanted to lose weight the natural way. Her type two diabetes diagnoses had left her crippled with fear of the future and determined to make a change. 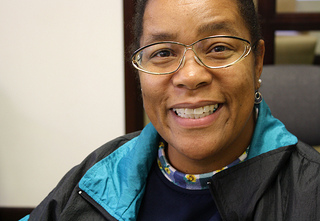 Alisa Israel, 48, lost 80 pounds. The mother of two was struggling with serious health issues and was determined to make a change. Photo by Zoe Lake.

Israel joined a type two diabetes support group at the Cooper Green Mercy Hospital in Birmingham, where she quickly was directed down the street to begin attending free eating and wellness classes at the Minority Health and Disparity Center. There she learned she was eating nearly three times the amount she should have been and consuming way too many fats and sugars. Cutting down portion sizes and learning to read labels has helped Israel drop 80 pounds and get down to a size 16 in the past year and a half.

Like many overweight people, Israel did not realize the amount of food she was consuming was slowly killing her.

“I was accepting of my condition,” she said. “Down here you see a lot of heavier people, you think, ‘well, I’m ok.’ I didn’t realize I was hurting my physical self,” Israel said.

Couch sees this lack of consciousness in many of her patients.

“If you ask people who are overweight, they will tell you they don’t eat a lot or don’t eat unhealthily,” Couch said.

“Most people are overweight in America,” Schmitt said, “It is a disease. There has never been a time in the history of man when food has been more plentiful. It’s easy to be obese in America. Our plates are getting bigger, and we take in way more calories. We don’t have to expend the calories we used to, we have central air, we have central heat. We are not chopping wood anymore.”

Schmitt has firsthand experience with the toll obesity can take on a person and a family. Schmitt’s father was morbidly obese, and at 74 underwent a risky bariatric procedure. Now at 83, Schmitt’s father has reversed his diabetes and still lives alone.

“It saved his life,” said Schmitt.

Southern eating may be a large part of the problem.

“It’s the tailgating, and the chicken,” Israel said. “I’ve never heard anyone say that they take baked chicken to a tailgate, its always fried chicken, ribs, big potato salad and coleslaw. That’s what people are eating, and they’re going to consume as much as they can.”

Israel’s story, like so many others’, is a cautionary tale. Her husband, who was obese, died of complications from diabetes, leaving her alone to raise their two children, who are also struggling with their weight.

“Just stop for a minute and think about what you are doing,” she warned. “You’ve got to eat to live, not live to eat.”