At the University of Alabama in Tuscaloosa, it’s hard not to get sucked into Roll Tide fever. It’s infectious, especially on a gameday that could (and did) extend the football team’s seven-game winning streak. 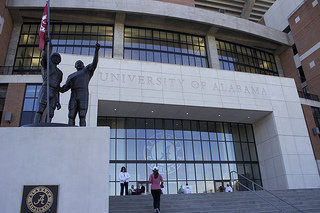 University of Alabama in Tuscaloosa, Ala. was shaken recently by a racial discrimination scandal. The Bryant-Denny Stadium is home to the Crimson Tide, their beloved football team, but whose fans tailgate separately. Photo by Zahra Ahmed

Last Saturday, generations of families tailgated several hours before the game, forming a blanket of crimson red on the perfectly manicured 22-acre Quadrangle before heading to Bryant-Denny stadium to watch their beloved Crimson Tide play rival University of Tennessee.

Devoted fans drink, man barbecue grills and are gripped to 42-inch television sets. But even amid all the frenzy, black and white fans party separately. Every now and then, a mixed group of friends or an interracial couple will pass by — an oddity making its way through a crowd of mostly white fans.

The crowd on Saturday was clearly segregated for a campus that was shaken by a racial discrimination scandal in mid-September, in which alumnae of traditionally white sororities rejected two well-qualified black women.

But among all of this, the university’s increasing out-of-state student population has been one of the loudest voices against modern-day segregation within UA’s Greek system. While this divide — sometimes subtle, sometimes obvious — is recognized across the nation, some out-of-state students said coming to UA has been a new experience.

Yardena Wolf, 19 of Oregon, said she was having fun as a freshman and a member of the Alpha Omicron Pi sorority. But now a sophomore, she slowly caught on to an established, age-old truth about UA’s Greek system during the formal recruitment period in mid-August known as rush week.

“I had never really felt it before,” said Wolf. “But I was realizing more and more it was a like a decided thing in the sororities: We just don’t take black girls.”

The two black women who rushed had impressive high school resumes. One of them had graduated as salutatorian of her class and comes from a long line of alums, including her stepfather, state representative Chris England, and step-grandfather, John England Jr., who serves on the UA board of trustees. Neither woman received a single bid.

It came as a surprise to Wolf, who said there are “really no race issues” in her home state. She said the two black candidate’s credentials made them stand out among almost 2,000 girls who rushed.

During recruitment, Wolf said there were discussions about whether any sororities would accept the two women. When none did, she voiced her dismay, resulting in disapproval from several fellow sisters, which eventually led her to move out of her sorority house at the end of rush week.

But she wasn’t alone in being vocal. After Alpha Gamma Delta member Melanie Gotz went to the school newspaper, the Crimson White, hundreds of students marched across campus to protest against segregation in the Greek system.

Out-of-state sophomore Khortlan Patterson, 20, along with Wolf, was one of the speakers at the end of the march at an administration building, where UA President Judy Bonner and other high-level administrators were present.

“I think there existed a culture of silence prior to people out-of-state coming,” said Patterson, from Houston, Texas, the nation’s most ethnically and racially diverse city. “Some people didn’t see anything wrong with it because they didn’t know anything different.”

Out-of-state students contribute to 38 percent of UA’s 33,600-student population. Last year, the CW reported that more than 50 percent of the enrolling class in 2011 consisted of out-of-state and international students.

“A lot of the girls who were pledging…and minority girls aren’t as accustomed to the segregation here in Alabama,” said Patterson. “A lot of girls came from out-of-state and were shocked that the system was so segregated because that’s not how it is in other parts of the country.”

Ongoing discrimination in UA’s Greek system is nothing new. What’s different this year is that out-of-state and Greek students have been fueling the protests, which is why misconduct in recruitment is finally being addressed.

“We can’t just fight something from outside an organization,” she said. “You need people from inside the organization to help to speak out against it.”

Patterson said students believe administrators haven’t done much about it in the past, leading to mistrust between two groups in which communication is key.

President Bonner later said in a Sept. 17 video update that she had been working with the administration to improve this year’s recruitment process before it had ended.

“The Office of the President and the Office of Student Affairs began working with the local chapters and the national chapters to address what the barriers were — whether they were real or perceived — and began to move forward with a plan to help the Greek system embrace the diversity that is represented at the University of Alabama,” Bonner said in the video.

Patterson said she now has faith in the administration after realizing they already had plans to combat discrimination.

“It turned the demonstration into more of a celebration instead of us rioting against the administration because they were already planning to do something,” she said.

But still, some students think the administration can do better. Even current UA students who have grown up in Alabama and are more familiar with racial discrimination typical of the Deep South have spoken up.

“They [the administration] seem to be content largely with taking baby steps and inching towards our goal,” said Henry Perkins, 23, from Mobile, Ala.

Perkins is a member of the Mallet Assembly, which was established in 1961 to desegregate the university and provided the first housing available to black students, although its current membership is more diverse. 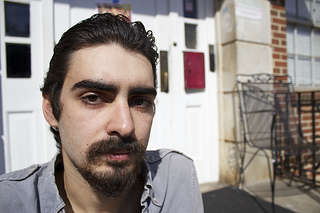 Henry Perkins, 23, has been active in recent protests against racial segregation at UA. “Historically, I’ve been kind of a protester,” he said. “All these actions fit me like a glove. This is perfect for what I want to do.” Photo by Zahra Ahmed

He said that the administration won’t take autonomous action without being pushed by students, “but they’re also willing to work with us when we take big steps forward.”

“Right now we have an obvious thing, which is destructive and not conducive to an appropriate college experience,” he said. “I think the university is trying to integrate for the first time potentially ever, which I’m very supportive of.”

Perkins said that there has been a spike in harassment since the demonstration and as a stand against it, the Mallet Assembly hosted a barbecue open to all students. The turnout was successful, with around 200 people in attendance, some of those even Greek.

One of the non-Greek students who came was 21-year-old Ross Green, a native of Tuscaloosa, Ala., who also participated in the protest.

As an in-state student, Green said natives from the South “are more prepared to deal with race than the North or the Midwest because there is a large African American population at the university.”

“College campuses have become a little bit more tolerant seeing more diversity, but that doesn’t transform the way we see and interact with people,” he said.

“We live by a culture of silence and tradition where the old ways are deferred to,” said Green. “A handful of students who were Greek and non-Greek were tired of the status quo.”

Since the demonstration, the university has taken several steps to integrate the Greek system. On Sept. 16, the Alabama Panhellenic Association announced an amendment that would extend sorority membership to 360 members, which reopened the bidding process. As of mid-October, all of UA’s Panhellenic sororities have a combined 23-minority membership, including 14 black women.

Still, Green said “there’s always more to do. A lot of these [black] women are still one out of 300 members — they are basically token [members].”

“For me, the perfect school is always striving to do better,” he said. “We had more progress in two weeks than we did in 50 years, but that is by no means enough.”