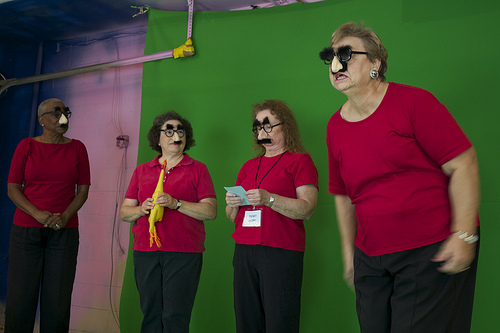 (From left to right) Seasoned Performers Marva Douglas, in her seventies, Elise Bodenheimer, 60, Pauline Neilson, in her sixties, and Phyllis Landers, in her sixties, don Groucho glasses and deliver jokes to the camera. Photo by Jordyn Taylor.

In the cluttered basement of a Mountainbrook mansion, four female actors donned Groucho glasses and sprightly performed a comedy routine for a local access cable TV show. When they finished, Phyllis Landers’s back was hurting; Marva Douglas had to rest her aching knees.

All in their 60s and 70s, the women are members of the Birmingham-based Seasoned Performers: Alabama’s only professionally run senior citizens’ theater troupe. For the aging actors—some well into their eighties—the group is, quite literally, a life saver. But due to recent budget cuts, the Seasoned Performers might soon have to take their final bow.

Now in its 30th anniversary season, the group has typically received funding through the Older Americans Act (OAA) . Passed by congress in 1965, the legislation grants federal funds to states to support social and health services for senior citizens and their caregivers.

But with each passing year, more Americans are living longer—forcing state governments to disperse the federal OAA grants amongst a broader spectrum of recipients.

Since Ellise Mayor, 56, signed on as the Seasoned Performers’ artistic director, she’s watched their annual funding slide from $30,000, to $15,000, to $7,500, to $4,000. Driving to lunch after the cable TV taping, Mayor said the group had yet to receive any federal funding whatsoever for the 2014 fiscal year.

“This year could be the last,” she said sadly.

Without adequate funding from the government and individual donors, there’s no way the group will be able to pull off its yearly statewide production tour, or afford to pay its technical associate. 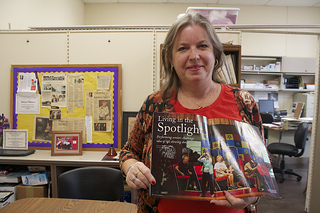 That infuriates Mayor, who said that acting has innumerable emotional and health benefits for the aging population. It’s not just a form of recreation, Mayor said, it’s also a viable alternative to traditional healthcare.

“We give them a happy, healthy old age; we keep them dynamic and engaged in society,” Mayor said. “If you’re not having a healthy, happy old age, why would you want to live longer?”

She noted that all the activity involved in putting on a performance—like vocal and physical warm-ups—keep the Seasoned Performers in excellent shape.

“They travel, put the sets up, break down the sets—if they don’t tour with us, the physical decline is really amazing,” Mayor said. “What we do saves money!” she added exasperatedly, referring to healthcare costs.

At a staged play reading at Birmingham’s Independent Presbyterian Church earlier in the day, another set of Seasoned Performers substantiated Mayor’s sentiments.

“It slows down the senility,” said 70-year-old Janice Wilson, who joined the group two months ago.

Sitting to her right was Henry Lapidus, who’s almost 80.  Lapidus hadn’t been feeling well, and his doctor said he could choose his treatment: a prescription, or the phone number for the Seasoned Performers.  Lapidus chose the latter.

“There’s a lot of satisfaction,” he said. “It’s something for old people to do. We haven’t got anyplace else to go.”

Leighanne Botters, 71, who’s been with the group for 15 or 16 years, loves the warm sense of community the Seasoned Performers provides.

“We have so much fun after our two-hour workshops—most of us go out to lunch,” she said brightly.

Mayor later said that many of the performers live alone, and “become each other’s family,” in a sense.

And it’s not just the actors who benefit from performing. Putting on around 160 shows per year, the Seasoned Performers often take their plays to underserved audiences who benefit from the exposure to theater. 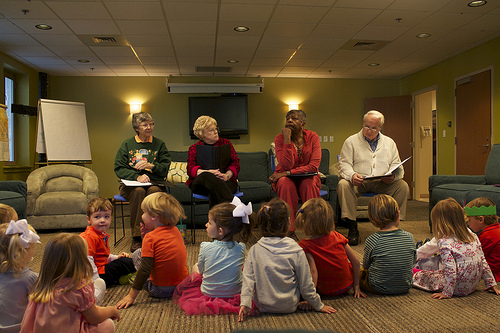 Botters still remembers the time she did a reading of Tom Sawyer to a group of young students. The students hadn’t been particularly interested in the story—with the exception of one little girl, who listened to the readers with rapt attention, transfixed, her “eyes sparkling.”

“If we didn’t do anything else the rest of the month, we had done great,” Botters said.

Funnily enough, the group also performs at retirement homes, before audiences of other senior citizens.

“Our audiences [at retirement homes] see them and think, ‘Hey, I can do that!’” Mayor said, “It’s something attainable.”

Despite her funding fears, Mayor said there’s definitely still hope for the Seasoned Performers. She was pleased to report the Birmingham Holocaust Education Center had recently approached the group to perform a reading at a November 17 Kristallnacht commemoration—a sign the group is still in demand. The Seasoned Performers also received a grant to perform a series of historical pieces at Birmingham’s Vulcan museum next February.

“It’s a positive thing,” she said over lunch the next day, contemplating the Seasoned Performers future endeavors. “It’s forcing us to be more intentional about our visibility.”