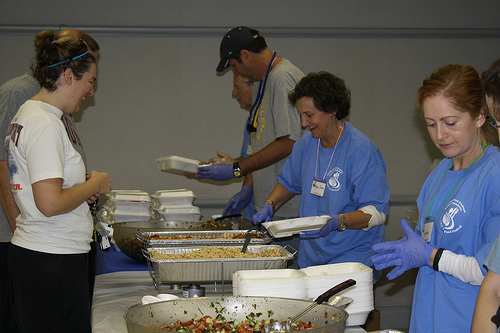 Amy Saag, 57 (second from right) serves up cabbage rolls and couscous to a guest at the Birmingham JCC’s Jewish Food Festival on Oct. 27th. Photo by Jordyn Taylor.

When it comes to food, Birmingham is known for down home delicacies like pulled pork and baby back ribs. But on the afternoon of Oct. 27, barbecue was nowhere on the menu at the local Jewish Community Center (JCC) , where hundreds of hungry guests tucked in to plates of falafel, bureka and sweet noodle pudding.

It might seem unlikely in the Bible Belt state of Alabama—where 56 percent of people identify as “very religious,” and over 80 percent identify as Christian—but the JCC guests said they love being Jewish in Birmingham. Instead of feeling isolated in their predominantly church-going state, the Jewish diners said their population’s small size makes for a vibrant, tight-knit religious community.

“It’s a great Jewish community—very close, very caring,” said volunteer Eyal Ron, 47, as he portioned out a traditional salad of tomato, cucumber and parsley. Originally from Israel, Ron has lived in Birmingham for the past 22 years.

“Because we’re small, we’re very aware of our Judaism,” chimed in Amy Saag, 57, as she presided over a neighboring tray of saucy meat-stuffed cabbage rolls. “We don’t take anything for granted.”

Inside the auditorium, where long tables had been decorated with blue and white balloons, history expert Barbara Bonfield, 76, explained the history of Jewish immigration to Birmingham. Jews from Germany first started moving to the city in the 1850s, and a wave of Eastern European Jews came later, in the 1880s, she said. 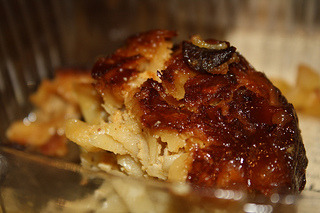 Noodle Pudding, or kugel, is a Jewish baked casserole made with egg noodles or potatoes, in both sweet and savory varieties. The JCC’s noodle pudding was sweetened with apples and raisins. Photo by Jordyn Taylor.

“Birmingham is a new city, founded in the 1850s,” Bonfield said, “Word got out that this was a booming city, so they came here to make their fortune.”

Today, Birmingham is home to 5,000 Jews: the largest Jewish population in all of Alabama. There are three congregations—modern orthodox, conservative, and reform—as well as a Chabad, or Hasidic, group.

“It’s a very religious community in Birmingham, so [non-Jews] have more respect for someone connected to their Judaism than for someone who’s ambivalent,” said Sally Friedman, executive director of the Birmingham Jewish Foundation. “There are a lot of people who love and respect Jews because the Bible told them to,” she added. 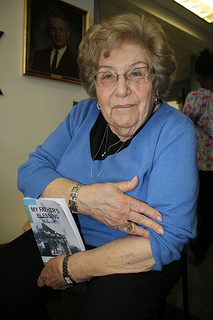 Holocaust survivor Ruth Scheuer Siegler, 86, displays the tattooed identification number she received while imprisoned at Auschwitz, where her parents and brother were tragically killed. Siegler said she has always felt very welcomed by the Birmingham community. Photo by Jordyn Taylor.

Ruth Scheuer Siegler, 86, a Holocaust survivor whose mother, father and brother were tragically killed at Auschwitz, moved to Birmingham in 1960 to join her sister, Ilse, who had also survived the concentration camps. She’s always felt very welcome in the southern city, and said she was able to give her children “a normal life.”

Siegler is even warmly welcomed as a speaker at rural Alabaman schools, where, in the words of the community center’s marketing director Robin Smith, “kids might never have seen a Jewish person.”

“Those kids are just amazed—they love it,” Smith said. Apparently, some of the rural schools Siegler has visited have since implemented semester-long courses in Holocaust Studies.

But although there is no rampant anti-Semitism, ignorance about Judaism is common.

Friedman said that when her husband was working at the “Birmingham News,” a coworker asked him if he’d ever consider eating a chocolate Easter bunny. Ron said that once, while visiting a small town, a girl was openly surprised to find he did not have horns.

Thankfully, people tend to be respectful in their ignorance.

“Most people love to learn from you and ask questions,” Ron said.

Still, the most important question had yet to be answered: how can a kosher Birmingham Jew indulge in southern barbecue, when pork is totally out of the question?

The same answer was quickly recited, almost intuitively, from a number of JCC diners: chicken and brisket.