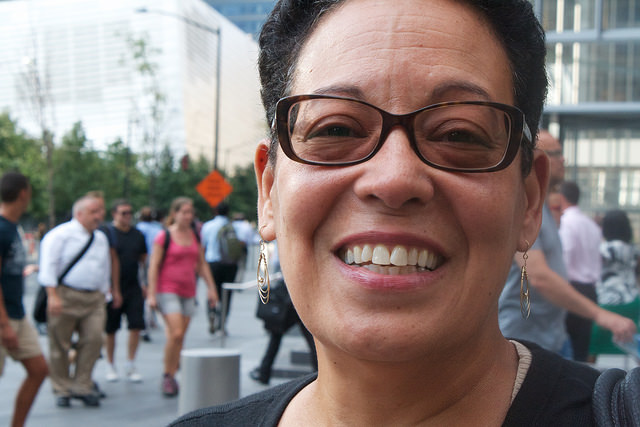 Jeanette Gutierrez believes her sister saved her life by forcing her to leave the World Trade Center area. Photo by Ugonma Ubani-Ebere

Jeanette Gutierrez walked past the 9/11 Memorial Museum today and remembered the tragic day when her sister most likely saved her life.

Gutierrez, 53, from Brooklyn, was at her desk on the 16th floor at the Third World Financial Center, a building directly across from the North Tower when the plane hit it. She felt strange and long vibrations in her skin, and heard a loud noise, but thought nothing of it. But when she heard sirens, she felt comfort knowing that the police were handling it and went back to work.
“I glanced up from my desk to the window that was down several desks, and saw big things flying down past the window,” Gutierrez said. “I went to the window and pressed my face in the window, and that’s when I saw the gaping hole, black smoke, and fire, and immediately thought it was a bomb.”

Gutierrez did not know that a second plane hit the South Tower because the North Tower blocked her view. Gutierrez’s sister, Gayle who worked for the government in a downtown office, called and told her about the second hit, and to evacuate. But security officers did not want her to leave her desk, so she stayed. Her sister would not give up, she insisted she leave, and that they meet at the McDonalds in the area. Gutierrez gave in and decided to leave the building.

When she got to the lobby she could see that the situation was spiraling out of control. She was scared to go outside.

“There were people in my lobby sitting on the floor, they were bleeding, and I did not want to go outside if these people came from out there,” she said. “There was no way for me to reach my sister, so I had to go.”
Gutierrez made it to the McDonalds and her sister. Together they were able to get far enough away from the unfolding tragedy.

“I could not understand why my sister would leave her office and not go home to her three children and her husband,” she said.” Instead she came to a plaza with two burning buildings to make sure I didn’t stay at my desk.”

Gutierrez now volunteers at the September 11th Memorial and Museum as a way to give back to the city in her own special way.

“I did not lose a single person in 9/11, which is amazing being a New Yorker, and working down there, but now I know so many people who have,” said Gutierrez. “So you share their grief, but overall it is an honor to me.”

Many downtown workers honored the14th anniversary of 9/11 by wearing decorative shirts that commemorated the ceremony, or by actually working. Many of them were lost in memory.

Vinny Vanuti looked down on the memorial service from a window with his coworkers as they worked on the plumbing system in the new One World Trade Center. Though he was not personally affected, he does what he can to give back.

“Me working in the building is a job, but it’s a way of giving back to the city, and it’s a sense of pride”, he said. “To use your craftsmanship in the building, and knowing that you did, is a great feeling.”

Evangelist, Mary Clement, blessed every police officer she encountered as she walked to the monument to pray for the victims and families. She didn’t lose anybody on 9/11, but knows people from some churches that have, and it made her come to help.
“We must encourage each other”, said Clement. “When one hurts we all hurt. We’re all one race, the human race. So everyday we must strive for peace, equality, and to love one another like Jesus said.”

It has been 14 years, and Gutierrez feels without 9/11, and the heroism she witnessed, she wouldn’t be where or who she is today.

“I don’t know what makes a regular person help someone they don’t know, but I recognized that we were just human beings helping each other that day,” she said. “9/11 opened up a different world for me, a better world for me, and because of it, I am a better person.”