14 Years Later: First responders still in battle for their lives 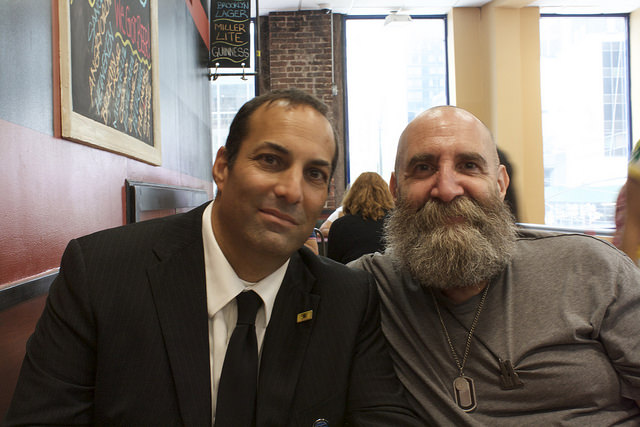 Sam Kedem(left) and Les Speiser (right) were first responders during the Ground Zero Relief effort and meet every year for the 9/11 memorial service, Friday, Sept. 11, 2015. Both have suffered from health issues as a result of their time at Ground Zero. Photo by Taisha Henry.

Sam Kedem(left) and Les Speiser (right) were first responders during the Ground Zero Relief effort and meet every year for the 9/11 memorial service, Friday, Sept. 11, 2015. Both have suffered from health issues as a result of their time at Ground Zero. Photo by Taisha Henry.

He is one of the reported thousands of ground zero workers who have battled a range of illnesses since the attack.

Today Speiser and his friend and fellow first responder Sam Kedeem came together to remember the terrorist attack that they too became victims of. Each year they and others gather together with news of who else has died.

Now these men and countless others face an end to the medical support they were given through. The Zadroga Act, which provided medical benefits and screening and The World Trade The World Trade Center (WTC) Health Program which offers $2.75 billion dollar in aid will expire in October 2016. The 9/11 Environmental Action organization states that 70,000 people who were affected by the September 11 attacks rely on these funds.

Speiser, a former advertising agent, is a Brooklyn native and was a part of the food relief effort. He served food to the workers on ground zero during the months following 9/11.

Kedem, a clinical psychologist, and Speiser believe that all workers illnesses must be a direct result of the toxins.

“I have asthma now and have to take medication for it, I never had that before, I ran a marathon before,” said Kedem.

Speiser rarely got sick and believes his exposure to the toxins has effected him.

“I was healthy as a horse, he said. “I got sick once maybe every four years, I never got sick until after I volunteered. My right lung doesn’t expand, I had to go to speech therapy to learn to speak through my nose and not my throat. I have had a constant headache for 12 ½ years. I’ve learned to live with it.”

With Speiser’s health issues and recent cancer scare, Kedem is worried about what may become of his friend.

Despite his own illnesses, Speiser is worried about the other responders and victims who may not receive aid if the Zadroga Act doesn’t get renewed.

Although lung and mental health issues were known effects of Ground Zero toxins, Dr. Trasande, who is an Associate Professor of Pediatrics, Environmental Medicine & Population Health at New York University, said two more diseases have shown up in first responders.

“We are seeing heart disease and cancer, he said. “They are the two that have been appearing more.”