14 years later: Spreading the word of God at ground zero 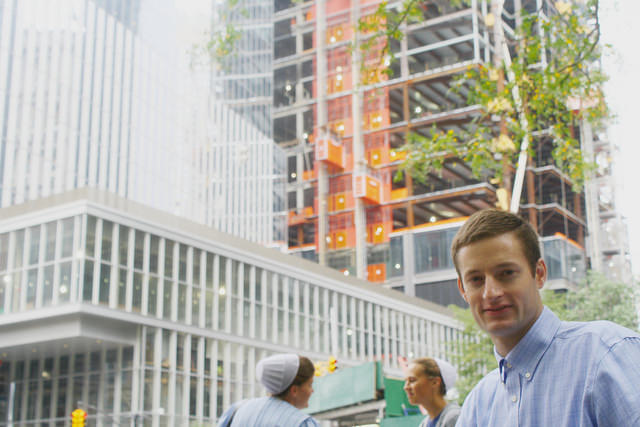 John Hollingshead, came to ground zero today with his Mennonite church group, to spread the word of God Photo by Diego Lynch.

John Hollingshead, came to ground zero today with his Mennonite church group, to spread the word of God Photo by Diego Lynch.

Ground zero has become a mecca, for the family and friends of victims and looky-loos alike.

Among the pilgrims there is a smattering of evangelizers. They hand out pamphlets, pray and sing to the currents of people who flock to the area to work and to pay their respects.

At the 14th anniversary of the 9/11 attacks today, John Hollingshead, 25, was in attendance with a traveling group of Mennonites that are based in Russell, Mass. He and the church’s members are looking to increase their flock of believers and think that this site is an important place to spread God’s word and to heal.

“Christ is both the forgiver, but also the healer,” he said. “And that is what we are here for, the healing.”

For most of the day the memorial is closed to the general public. Until 3 p.m., the park is utilized by the surviving loved one’s for a service. This leaves the tourists to circle downtown, through the Tribeca, Financial District and Battery Park, killing time until it is opened and they spiral inwards.

The promotion of healing was a running theme.

“For instance, when Hurricane Katrina happened some religious leaders said that was God’s will,” said Christine Dinniene, 42, a Jehovah’s Witness, who was distributing literature that morning. But she disagrees. “The bible helps us to see that God would never do such wicked things.”

She believes people can recover from a disaster through God and that God gives comfort to those who feel alone.

“A lot of people don’t have a voice, are forgotten, we live in a very wealthy city, she said. “You see a lot of people who are very neglected.”

There was a degree of nostalgia for the religious climate of the United States that flourished in the aftermath of the attacks.

“It is a lot colder, there isn’t near as much emotion,” said Hollingshead, of the change in the religious mood of the country.

The increased faithfulness after 9/11 was attributed to a natural reaction to disaster.

“It is like they say, there are no Atheists in foxholes,” Dinniene said.