2016 NYC Marathon: Veteran Whistles for Runners at “Top of the Fifth” 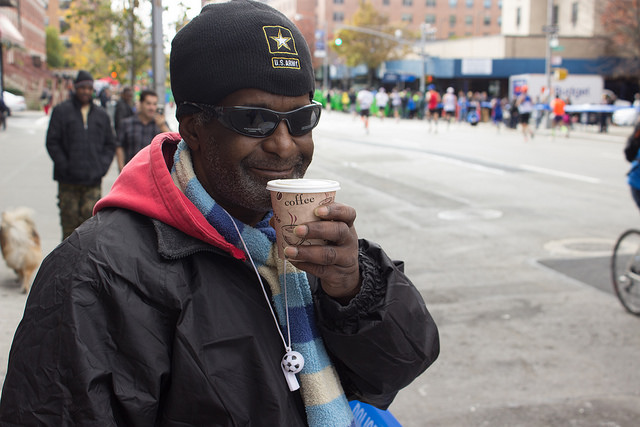 Wilbert Grier is an Army Pilot veteran and proud member of the “Top of the Fifth” community. Grier comes out every year to show his support for everyone running the race. Grier blew his whistle and shouted the name written on every racer’s bib as they passed by. Photo by: Brandon Gomez

“Top of the fifth” is usually a phrase tossed around by baseball fans, but for a neighborhood in Spanish Harlem, it’s the nickname of their little two block community at the top of 5th Avenue. Today a crowd of New York City Marathon supporters lined the “s-curve” route which comes at mile 22.

Even at the earlier hour of 11:00 am, before the first few runners passed, residents sat on their porches and held up signs of encouragement.

“We are proud of our community, but we also know that our community is proud of us,” said Wilbert “Wild Thing” Grier, 55, who lives in the area. “It’s a beautiful little two blocks.”

Grier, came bundled up and ready to show his support with coffee in hand and a small black and white whistle dangling around his neck. Even though cheers and applause erupted from nearby supporters, little compared to the sharp piercing sound of Grier’s whistle.

“The last few years I’ve been leaving the race a little hoarse, so this year, I decided to bring my whistle I got from the Puerto Rican Day Parade,” he said.

Today at the race Grier stood along the sidewalk as a spectator, but he was no stranger to being on the course. Having run marathons and Iron Man races before, he knew all the mental strength needed to finish.

“When you’re running a race, you are always running for your life. It’s a great thing,” he said.

But Grier connected his own mental strength with other life experiences. Having been around the military since he was nine-years-old, and watching his father serve as a merchant marine, Grier proudly wore his “U.S. Army” hat.

“Being an Army pilot veteran, and now being out here on the ground cheering for people that I flew for, for their right to do this and have fun, it makes it all very rewarding to see people enjoying themselves,” he said. “It’s a great thing to be a part of a great event.”

Grier grew up as a curious child, constantly reading the Encyclopedia Britannica. He even used to be bullied at school for being the nerdy kid. After serving in the army, earning several degrees, and mentoring others, he continues to face the negativity of others.

“I am always getting stereotyped as not too bright or not too smart, you know, me being an African American,” he said. “I get a sense of edge. I often get stereotyped because of age, race, creed, or gender.”

But watching the marathon, Grier was reminded of the humbling affect a race can have on the community.

“When you come out and watch these races you don’t know who that person is standing next to you, but one thing is for sure, being at the New York marathon brings the community closer together and that’s how you know people are proud of their neig