9/11 “Truthers” spread their “truth” on anniversary of terrorist attack 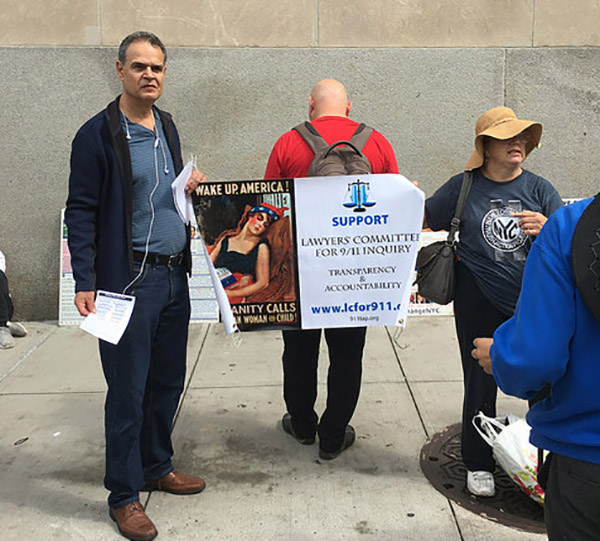 Les Jameson, left, poses with a fellow “truther” holding a banner calling for a reinvestigation of 9/11. The group, which believes 9/11 was a conspiracy, were spreading their theories today on the 17th anniversary of 9/11, Photo by Emma Bolton.

On the 17th anniversary of 9/11 today, the group of people gaining the most attention at Ground Zero were 9/11 “Truthers.” They believe the government has been lying about the terrorist attack that took 2,996 lives.

“Building 7 is what we call the smoking gun,” Michael Arnold said. “It was a 47 story building that came down in less than 7 seconds.”

Arnold, from Atlanta, Georgia, was part of a small group of men in t-shirts that read “9/11: Truth Matters.” They held signs emblazoned with the words “Did you know a third tower fell on 9/11?”

Arnold  handed out pamphlets entitled, “Why You Should Question 9/11.” A large portion of the pamphlet was dedicated to 7 World Trade Center, the third building to collapse as a result of the fires caused by the planes that hit the Twin Towers.

“It came down symmetrically,” he said. “That is controlled demolition.”

Arnold used high school physics teacher David Chandler’s calculations that the building went into 3.23 seconds of free fall. According to him, that would not be possible unless the building had been intentionally demolished. Arnold said CNN and the BBC reported the building had collapsed prior to its actual collapse and that officials and scientists had difficulty explaining why the building collapsed.

“If Building 7 is the smoking gun, if one building came down by controlled demolition, they all did,” he said.

The pamphlet covered many more points of contention the “Truthers” have. It also implored in bold letters, “Be the change you want to see in the world. Get educated! Get Active! Get involved! Do your own research starting with the sites below!” There were six websites listed on the pamphlet and links to a Facebook and Youtube sites. To Arnold, the bottom line is, “If we were lied to, before you talk about who and why, you have to wrap your mind around the fact that we were lied to.” He said that’s all he’s asking.

Fellow Truther, Les Jameson of East Harlem, handed out pamphlets called “End The 9/11 Wars.” He held a banner asking people to sign a petition in support of the Lawyers Committee for 9/11 Inquiry.

He said he heard some analysis about how well-known at least two of the hijackers were to the FBI soon after 9/11 that led him to look more closely.

“I knew that we had the most formidable military and intelligence apparatus the world has ever known,” Jameson said. There is no way way they couldn’t know this was coming.”

Jameson cited the failure of intelligence in the years leading up to 9/11 and the military action since as reasons to be skeptical. His pamphlet lists wars in Iraq and Afghanistan, The Patriot Act, the surveillance state and the militarization of the police as outcomes of 9/11. It insinuated they could be reasons for intelligence officials to overlook or cover up information.

The group attracted the attention of Bronx native and veteran, Eddie Rios. He had never interacted with the group in person.

“I’ve always been interested in (the truther movement), but I watch a lot of youtube videos,” he said. “A lot of stuff just doesn’t make sense to me.”