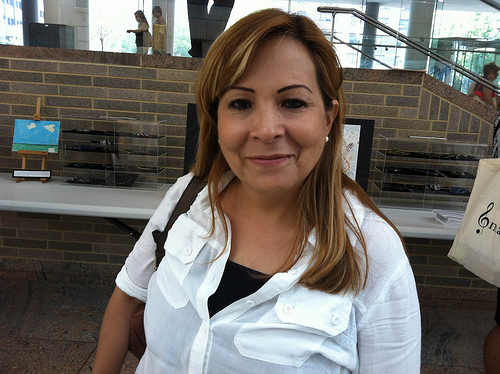 The world remembers several iconic images from the tragedy that struck the World Trade Center on September 11. The planes spearing through the towers at a rapid speed. The billowing fire. The towers crumbling to the ground. Maria Segaline remembers the smell.

“As soon as you got out of the train, you could smell it,” said Segaline, a 45 year-old Bolivian immigrant from Queens who worked at the World Trade Center and returned to work soon after the attacks. “We realized that it was the smell of burning. It wasn’t a nice smell, it was a horrible smell.”

After working there for almost a year, Segaline started to get sick. “I couldn’t talk because my voice was hoarse and I had the flu,” she said. “My throat swelled.”

She didn’t think it was the toxic air that lingered in the wake of that tragic day. She continued to work 12 or 16 hour workdays and medicated herself only with hot tea at home. Because she worked alone, her co-workers never saw her suffer from a high fever or take a break to vomit at work. She said she never went to see a doctor because she needed to work.

Segaline finally went to see a doctor in 2005 to get treatment under the World Trade Center Health Program available through the Bellevue Hospital Center in Midtown Manhattan, which offers medical and psychological treatment to responders after the attacks and people who worked or lived in the area. As part of her treatment, she got involved in an art therapy program for survivors.

“In 2005, I was another person because the whole time I was fighting for my body. I was so sick. I don’t like to remember it,” she said.

At the time she was also suffering from depression. “But the program helped me change my ideas and thoughts,” she said. “I’m now more happy.”

Segaline is one of about 14 participants in the World Trade Center Health Program’s art therapy program who featured their artwork in an exhibition at the Bellevue Hospital Center. The exhibition features 35 pieces of artwork by people who lived and worked in Lower Manhattan or helped in the September 11 cleanup and are now suffering from medical and emotional health problems. Their art offers them a creative release for the trauma they experienced on that horrific day and the health problems they continue to battle now. 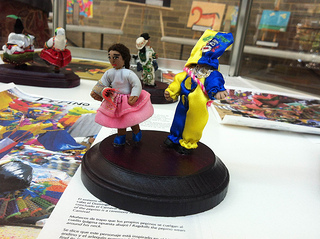 Maria Segaline, 45, of Queens, creates dolls based off of Aymara, an indigenous community in Bolivia. Photo credit: Leticia Miranda.

“Before I could work normally,” said Segaline. She paused to let out a quiet wet cough. “Now I am more limited but the art has helped me a lot.” She has been a participant in the program for eight years where she makes small dolls of Aymara, an Indigenous community in Bolivia. She hopes to craft dolls inspired by Cherokee natives.

Each week the participants gather for about two hours to work on their art pieces. Sometimes they have directives like reminiscence, homeland, the seasons or a theme like self care, coping tools. But mostly it’s a free two hours to be creative and express their inner thoughts through their art.

“Art is therapeutic for people who have this form of trauma,” said Irene Rosner David, Director of Therapeutic Arts at the Bellevue Hospital Center, who has lead the program since it’s beginning in 2005. “It can help them move in their recovery process towards a more adaptive way of life by acknowledging the past and moving forward.”

Rosner David said the title of this year’s exhibition was chosen to capture the program participants’ evolution towards healing from that traumatic day.
“There has been gradual more of the uplifting elements,” she said. “More intense color, more elements of nature. It’s not like there aren’t any elements that feature traumatic experiences, but we’re also seeing messages dealing with the here and now and moving on.

The program has helped Segaline move on. 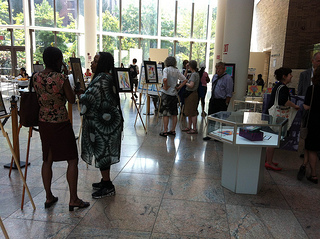 “It gets me up in the morning,” she said. Before the program, Segaline was extremely depressed. She said she didn’t want to talk to anyone. She was afraid and wanted to stay inside her house. She still can’t work because she fatigues quickly and has trouble breathing but art therapy has given her an outlet to pass her long days at home.

“Before I didn’t want to live,” said Segaline. “Now I wake up in the morning. I clean my house. I take my medicine. I want to live.”

The exhibition will be open to visitors in the hospital center’s lobby during weekdays until September 18.