9/11 Anniversary: In the midst of loss, a friendship is born 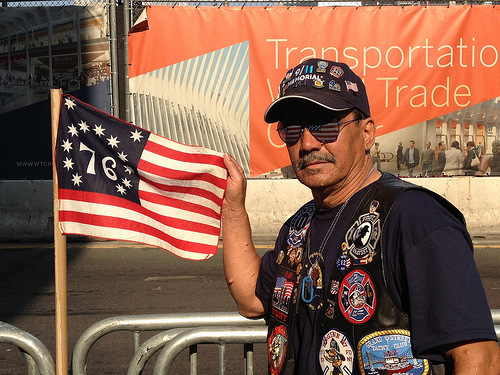 Jose Gonzalez, 61, near One World Trade Center. The retired first responder visits the site every year in memory of the victims of 9/11. Photo by Rajeev Dhir.

Tight security and a heavy police presence surrounded New York City’s financial district, as thousands commemorated the 12th anniversary of the September 11 attacks yesterday. But among the noisy processions, loud protestors, and chatting tourists clicking photos and videos, one man quietly held his own vigil.

Few stopped to talk to or even look at Jose Gonzalez even though he’s really hard to miss. Decked in a blue baseball cap and black leather vest, both covered with 9/11 patches, pins, and buttons, he held onto his small American flag with a steady grip.

“It’s beautiful,” said Gonzalez, looking up at One World Trade Center from his post on Church Street between Dey and Fulton Streets.

The soft-spoken 61-year old is almost hard to hear among the crowds.

“But I wish they would have made it the way it was before,” he said. “Two buildings. I think that would have helped keep the memory alive.”

Gonzalez, a Manhattan resident, was a first responder whose mission 12 years ago was to get as many people out of the North Tower as possible. Now retired from active duty since 2007, he calls it a day he’ll never forget.

“It was hell,” he recalled, tears welling up in his eyes, admitting that his emotions can sometimes get the better of him. “I can’t talk about it anymore.”

Gonzalez sets up in the same spot every year at 7 A.M. to pay tribute to the people who lost their lives in the tragedy, including one of his closest friends, firefighter Ruben Correa.

“He tried to save people, but lost his own life. I lost him,” he said.

For Gonzalez, Correa will always be a hero. Twelve years later, he’s still deeply affected by the loss.

“But it’s because of him (Correa) that I met my new friend,” he said. “He’ll be here soon. He’s just a little late because he lives in the Bronx.”

Gonzalez’s waited patiently for his friend, Gary Neilson, who arrived late. Gonzalez met Neilson by the same barricade in 2009. Neilson is a stark contrast to his friend. The bearded 59-year old is very outspoken and isn’t afraid to speak his mind. The two come also from very different backgrounds; Gonzalez is Latino, Neilson, who is white, calls himself a “true blue American.” 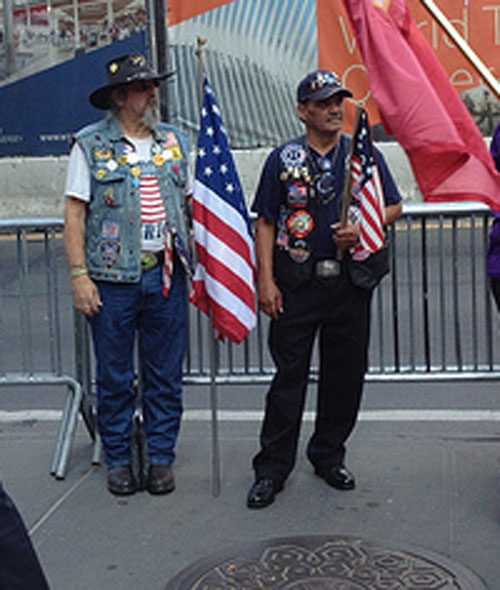 Despite their differences, the two recognized the common thread that brought them together. Neilson also lost a firefighter friend in the attacks, Pete Nelson.

“He (Gonzalez) asked me if we could hang out here for the day together,” Neilson recalled of their first meeting together three years ago.

Like Gonzalez, Neilson wears a special vest for the occasion, pointing out patches given to him by the city’s police commission and fire department. The back is a homemade homage to the American flag, reading “One America, one flag, one country.”

“I wear this everyday,” Neilson said.

They spent the first two years of their friendship facing the World Trade Center, sharing stories of Correa and Nelson. 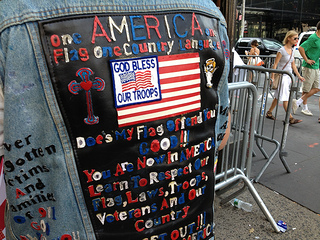 Bronx resident Gary Neilson, 59, shows off his homemade vest bearing the American flag. Neilson lost a friend in the 9/11 attacks in 2001. Photo by Rajeev Dhir.

“And all the others,” Neilson said. “We get thanked by family members who lost someone in 9/11 for being down here. I thank them for being strong. We need to give them the respect they deserve.”

The two will also talk to strangers. Some stop to quickly ask about their vests, but according to Neilson, most want to hear their stories.

Miriam Jensen, visiting from London, was only 13 years old when the Twin Towers went down. Being so young, she said, she doesn’t remember much.

That was until coordinated attacks planned by four homegrown terrorists hit London’s public transit system in 2005, killing 52 people and injuring hundreds more. Having that much carnage in her city, she felt like she understood New Yorkers.

“It’s great that something nice came out of something so horrible. I’m glad to see that the two have become friends with each other,” Jensen added, just before handing her camera to a passerby asking for a photo with Gonzalez and Neilson.