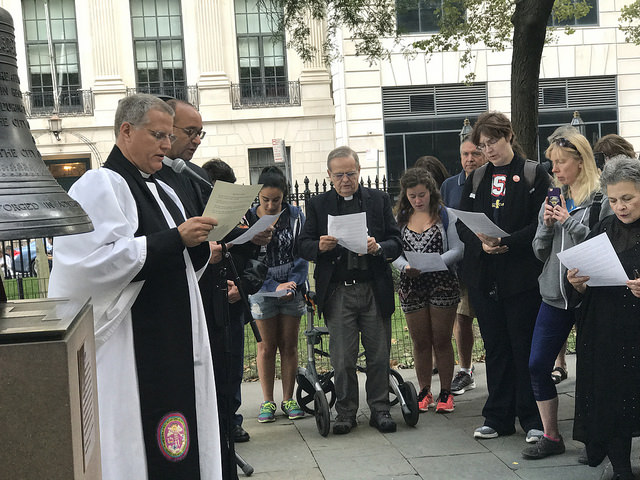 Spectators follow along as Rev. Dr. Bill Lupfer leads the crowd at St Paul’s Chapel in Lower Manhattan, in the Prayer of St. Francis at the end of yesterday’s ceremony. Photo by Kristen Torres.

Few spectators attended a ceremony meant to honor victims on the 16th anniversary of the 9/11 attacks on the World Trade Center at St. Paul’s Chapel in Lower Manhattan yesterday.

And Leo Pyzynski was one of them. He’s a 56-year-old architect who lives in Long Island.

“I try to come in every year for the ceremony,” Pyzynski said. “I’m a little disappointed there’s not areas for all of us to pay our respects so this is a substitute for me.”

The site of the former World Trade Center closes to the public on the anniversary of 9/11, admitting only friends and family of people who passed away during the attacks.

Pyzynski expressed disappointment in the lack of turnout that remembrance events — like the one at St. Paul’s Chapel — have received in recent years.

Much like many New Yorkers, Pyzynski remembers exactly where he was when the attacks happened. The first plane hit at 8:46 a.m.

“I was washing dishes and had WBAB radio on,” he said. “I turned on the TV after hearing about the first plane, and when the second one hit…I don’t think I moved until after 12 from that spot.”

Pyzynski said he worried about how the attacks will be remembered in future generations.

“So many kids that I tutor on Saturdays — they don’t even know what happened,” he said.

“It’s a horrible privilege to be here with you all this morning,” said Lupfer, director of Trinity Church.

“We ring this bell in solidarity for victims of attacks here and around the world,” he said. “We remember those who have fallen — we always will.”

Lupfer continued to ring the bell for four sets of five rings, following the tradition of New York City firefighters’ salute to the fallen.

St. Paul’s Church stands directly across from the scene of the Sept. 11 attacks, but remained completely unscathed by the wreckage.

In the aftermath of the attacks, the church served as a feeding station for first responders in the area.

“For almost a year we had barbecues set up, we had foot care available — when the plane hit the towers we became a respite station,” Lupfer said.

Yet despite the church’s involvement in the rescue efforts after the collapse of the buildings, only about 40 spectators attended this year’s commemorative ceremony.

The Bell of Hope was given to the people of New York by the City of London shortly after the attacks in 2001. It’s now permanently housed on the grounds of St. Paul’s Chapel.

“Our church has been here for a long time — since our nation began,” Lupfer said. “So we’ll be here a long time, praying for those who fell on 9/11.”

Huddling against the wind, some spectators bowed their heads in silence while others gripped at their programs, eyes staring blankly at the ground.

One man held up a camera, wiping tears from his eyes.

“We talk about the healing of memories, and so the church has always prayed to remember,” Lupfer said. “The opposite of remembering is dismembering, so we try to take what is fragmented and do it through prayer — bring people back together so they’re back in unity.”