9/11 marked by poignant moments… and a birthday 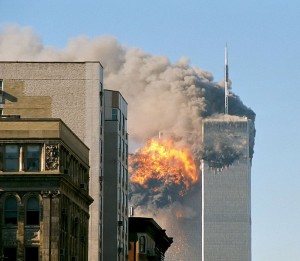 The curly, red locks of a child emerged from the crowd not because of its shade or style, but because it was the only head lifted high as the rest were bowed in respect of those who lost their lives ten years ago on September 11, 2001.

“I don’t bow my head because I like to look up at the sky and think they’re all looking down here,” said 10-year-old Aleiah Rosario, who came with her mother from Sydney, Australia.

“Ten years ago I gave birth to my little one here,” Kaleah Rosario, 34, said as she pat the head of her daughter, dressed from head-to-toe in red, white and blue to perfectly match the American flag clutched in her hand. “I saved enough to make the trip here to show her that her birthday has so much more meaning to it, that it isn’t just about cake and balloons.”

Despite long security lines and terror threats, throngs of people gathered along Church and Murray Streets, hoping to catch a glimpse of the ceremony, attended by President Barack Obama and First Lady Michelle Obama.

At 8:54 a.m., the name-reading ceremony began. Relatives spoke aloud each name of the nearly 3,000 victims in addition to those killed in the 1993 World Trade Center attack. Many of the names were read by children, some recalling fond memories of a lost parent and others tearing as they vowed to “never forget.”

“It really adds something personal,” said Jeung Lee, 23 of Canarsie, Brooklyn as she wiped tears. “You really see the emotions, the pain, the sadness and everything in their eyes as they read the names and it just strikes you.”

A bell to signify when United Airlines Flight 175 struck the South Tower marked the second moment of silence at 9:03 a.m. President George W. Bush then read a letter written by Abraham Lincoln to a widow who had lost her five sons in the Civil War. At this, 42-year-old Stella Cappallicci of Florence, Italy began to cry as she remembered this was the exact moment terror unleashed right before her eyes.

“I was here, visiting New York City for the first time 10 years ago,” Cappallicci said. “Then I was crying because I was so scared and fearful for my life, but now I cry just thinking of all the people that day, especially the ones who helped get me to safety. I never got a chance to say thank you.”
Four more pauses followed – the time when American Airlines Flight 77 hit the Pentagon, the moment when United Airlines Flight 93 crashed in Pennsylvania, and the times each tower fell.

“Usually when people think of New York the first thing they think of is bright lights or diversity,” he said as he held the hand of his wife, Dana, 53. “But this is something that will come to my mind every time I’m asked that question. It’s something that surpasses every other memory I have of this city.”