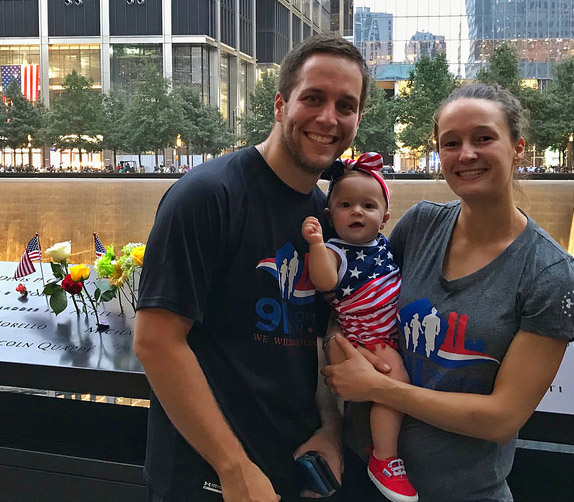 James and Mackenzie Baden with their daughter, Callie, after finishing the 240 mile 911 Promise Run from The Pentagon to Ground Zero today. The run honored the victims of the 9/11 attacks. Photo by Kathleen Taylor

James Baden journeyed 240 miles in three days from the Pentagon in Washington, D.C., to Ground Zero in New York to “give back to the community.”

Baden and his wife, Mackenzie, both from Virginia, were two of the 65 runners to participate in the 9/11 Promise Run which honors the memory of victims of the 9/11 terrorist attacks. Having left Washington at 5.a.m. on Sunday, September 9, the runners arrived at Ground Zero shortly after 6 p.m. today.

Throughout the training process, as well as the run itself, Baden was motivated by the memory of the 9/11 victims.

“They got the list of all the Flight 93 people who passed away in the crash and we were able to run in memory of them,” Baden said. “Every person got assigned one person on the plane.”

Mackenzie Baden said that it was the victims’ memory that got her through the difficult parts of the run.

“Times got hard, like, I have blisters on my toes,” she said.

But in those moments, she thought of families who had lost loved ones in the attacks.

“Imagining how they must feel just keeps you going,” she said.

The event’s founder and organizer, Jen Depoto, said the biggest reason for the run was to remember and honor the memory of the lives lost.

“I feel it’s really imperative that we remember all the lives lost and we every day make a point to honor our military and our first responders,” Depoto said.

She also wants to make sure children learn about 9/11.

“’Cause our country is always gonna be a target,” she said. 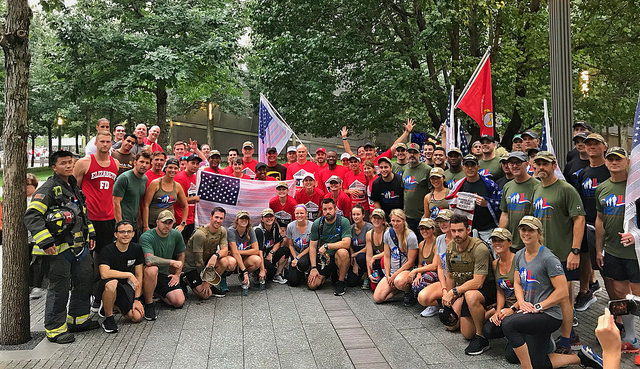 9/11 Promise runners after finishing a 240 mile relay run from The Pentagon to Ground Zero today. The run honored the victims of the 9/11 attacks. Photo by Kathleen Taylor.

The run was not a race, but a relay team effort in which runners of all ages and fitness levels participated.

“It’s a relay style run so you’re in and out of a van,” which, she said, is actually harder than just running a marathon.

The run also serves as a fundraiser, with 100 percent of the proceeds going to Hope for the Warriors, which helps veterans and their families. Every runner had to raise $1000 to participate.

After three days of running, the runners were exhausted, and many were emotional when they arrived at Ground Zero. They wore bright T-shirts with flags and other patriotic paraphernalia and attracted a crowd.

A number of tourists who were visiting the memorial gathered around the runners. They congratulated the runners and asked to take photos with them.

“I definitely couldn’t run that far,” said Michael Gomez, a tourist from San Diego who was visiting Ground Zero for the first time. “It’s amazing”.