A block party showcases possibilities for women after incarceration 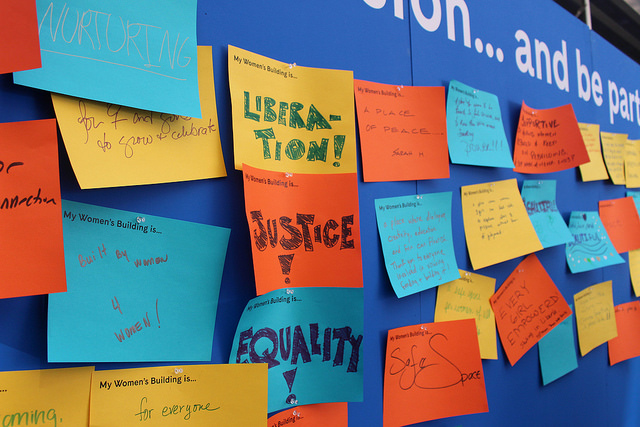 The block party was on West 20th Street, in the shadow of Bayview Correctional Facility, a former women’s prison. In the afternoon sun, the faded brick walls of the prison cast shadows over the white vendor tents. For many attendees of the block party, Bayview symbolized sad memories of their sentences and the injustice they faced as women who were once incarcerated.

“At first it was eerie to see some place I lived and used to look out the window and wish I was home,” said Iris Bowen, 59, of Mt. Vernon, New York. She spent four years in Bayview. “I remember many times crying. It feels like you’re the walking dead. You are alive and living and seeing life happen and you’re not there. That’s what it felt like, looking at Chelsea Pier, people rollerskating and going for walks, the cars. I wished I was there with my family.”

Bayview, a medium security prison, was closed right before Superstorm Sandy struck the city in 2012. The 153 inmates were sent to other facilities.

But this block party focused on second chances, which the prison building will have.

There is a plan to transform Bayview into The Women’s Building, a global hub for organizations working to advance the rights of women and girls. It is expected to be completed by 2022.

“The Block Party is to let the neighborhood know what The Women’s Building is about,” Bowen said. “A lot of people don’t know that this was a prison, a place of injustice. And now it’s a place of justice. It’s important for people to know what it was and what it is turning into. The transformation will be phenomenal.”

On a nearby stage, formerly incarcerated women performed for a crowd of friends, family members, and random passersby exiting the Highline. Along the sidewalk, women and gender advocacy groups distributed literature about their work.

Johanna Flores, 37, of Corona, Queens, is an employment coordinator for Hour Children, a nonprofit organization serving incarcerated and formerly incarcerated women. She was hired there after her release from Bayview 14 years ago.

“It’s very important to continue supporting this population,” she said. “We have so many talents. There are so many leaders here that are formally incarcerated. We deserve a chance.”

Formerly incarcerated women, many of whom served sentences at Bayview and were involved with The Women’s Building process, took center stage at the block party. They gave live performances, staffed the booths, and ran the catering. For many, it was critical to draw attention to the experiences that women, specifically women of color, face with mass incarceration. 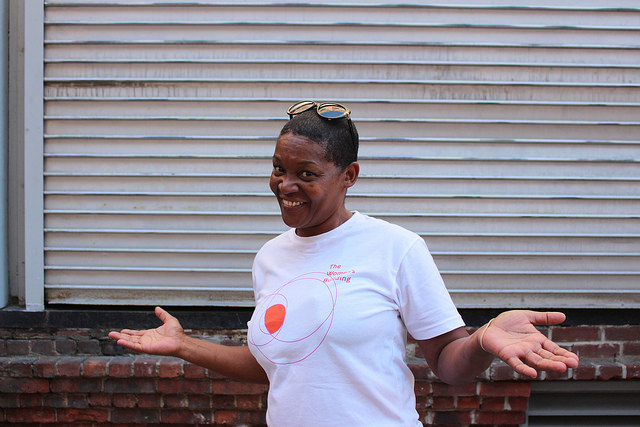 Shirelle Howard, 54, of the East Village, was incarcerated for 25 years and wants to see more programs geared toward women who were in prison. She attended The Women’s Building Block Party yesterday. Photo by Claire Tighe

Shirelle Howard, 54, of the East Village, was incarcerated for 25 years.  She felt many of the women she met were wrongly incarcerated, and that the right resources and education could have prevented them for entering the system.

“Most programs for incarcerated people are geared toward men,” Howard said. “This is for women who never had someone say, ‘Hey, come on over here. We’ve got something for you. When you get out of jail, you can still move forward.’”

Many of the Women’s Building Block Party vendors offered education and advocacy to keep women and girls out of jail. 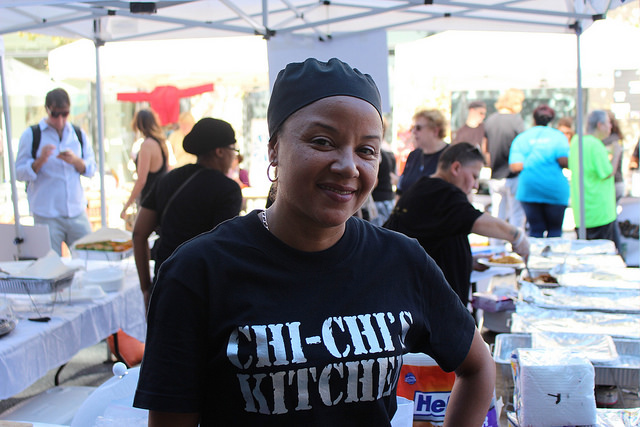 Keila Pulinario, 43, of Long Island City, Queens, was incarcerated for two years at Bayview where she worked as a chef. She is now the chef-owner of Chi-Chi’s Kitchen, one of the vendors at The Women’s Building Block Party. Photo by Claire Tighe

Keila Pulinario, 43, of Long Island City, Queens, was incarcerated for two years at Bayview. During her sentence, she worked as a chef. Since her release, she started a catering company, Chi-Chi’s Kitchen, one of two food vendors at the block party. She spoke positively about the transformation of The Women’s Building.

“That’s a building that once held us in bondage,” she said. “The building itself has such significant sadness and bad memories. Now you’re looking at it in a positive aspect: geared toward helping women as opposed to oppressing us. I’m excited about that.”