A community victory in Loisaida 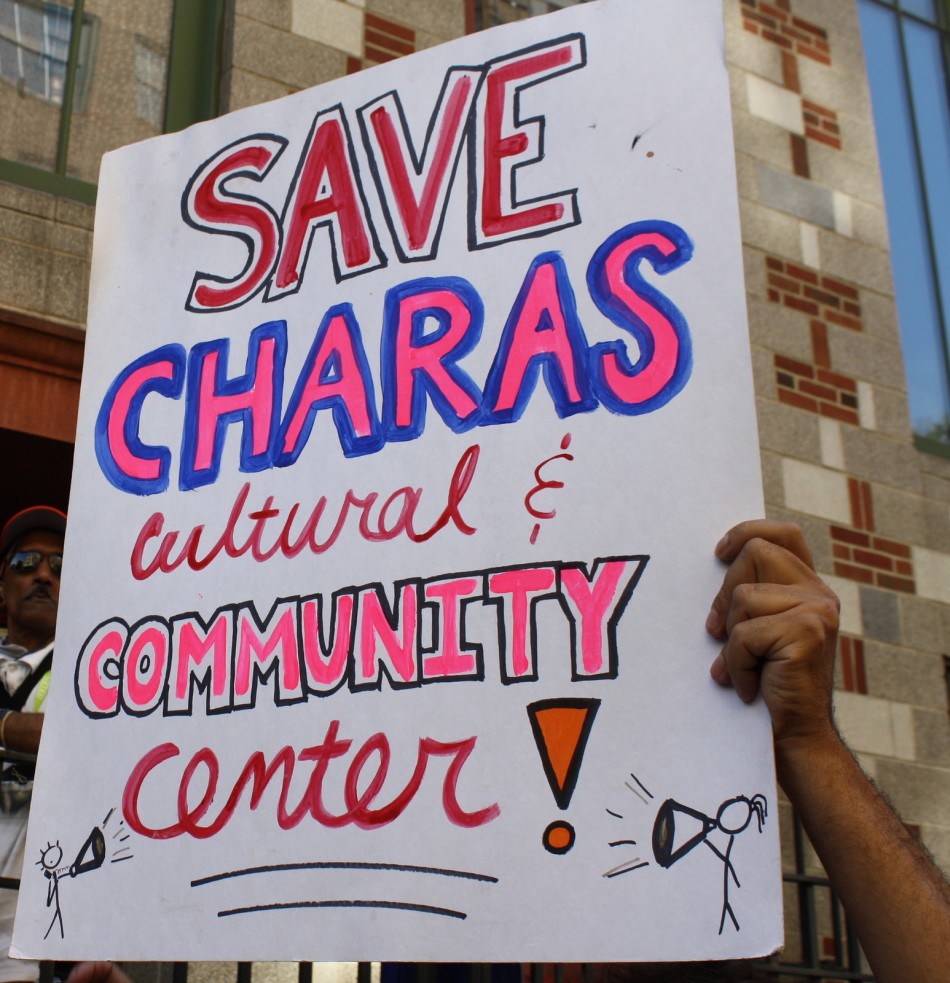 A sign supporting the return of the CHARAS community center to the people of the Lower East Side. Photo Credit Raz Robinson

A group of Lower East Side residents celebrated the first victory in the fight for a community’s rights to a building that has remained unoccupied for almost 15 years.

The crowd bellowed, “No lease. No Dorms” as Councilwoman Rosie Mendez took to the steps of the apartment building across from the abandoned CHARAS Cultural Community Center at 605 East Ninth St., yesterday. Mendez then announced that the Department of Buildings (D.O.B) has issued a Stop Work Order stopping land developer Gregg Singer, from turning CHARAS into a 200 bed dorm for Cooper Union and The Joffery Ballet.

“This building should be returned to the people of the Lower East Side and East Village,” said Mendez. “We will continue our struggle to keep that hope alive.”

Community organizers are now looking for a way that the building can be entirely given to the residents.
The building was originally erected as a public school in 1904. In 1977, four year after the school’s closing, various East Village and Lower East Side community organizations re-appropriated the building and turned it into a community center. Hundred of theater groups used the space.

In 1998 the Giuliani administration decided, after 34 years, to close the community center and put the building up for sale. Development was stopped as a result of discoveries made by the DOB regarding discrepancies between building codes and the agreement between Singer and the schools outlined in the lease.

A theme of yesterday’s event was discussing the difficulty of fighting back against the changes that hurt the neighborhood while embracing the ones that help it.

“The site of the former CHARAS facility was always intended for the public,” said New York State Senator Brad Hoylman. “We can’t allow developers to do end-runs around agreements put in place to ensure community use.”

Ralliers said the dorms would not contribute anything to the community, but rather open the door for development and further displacement of residents.

“We do not need for this to be a dormitory,” said Christian Valerio, a housing specialist with the Cooper Square Committee. “We don’t need some major institution to open up a center and start something. What we need is a grassroots based community center that’s open to the entire community.”

The CHARAS center for years before its closing served as an open space for the community to come together creatively as well as a space for discussion surrounding problems inside of the community.
“It was such an important part of the community’s vibrance and development,” said Sally Lelong, an artist and more than 30 year resident of the Lower East Side.“ In the 70’s and 80’s the city was in economic collapse, it was about to be torn apart by poverty, and this [CHARAS] created a means for people to sit, find common ground, and resist the destruction.”

Though the recent turn of events has temporarily kept the building from being developed further, Mendez and supporters of the rebuilding of the community center acknowledge that there is still more work to be done.

“We need to capitalize on this moment and ensure that we work even harder to bring a community center back,” said Anthony Feliciano a Lower East Side District Leader. CHARAS is more than just a building, it’s an institution that represents the Loisaida community.”