A deadly year for trans people 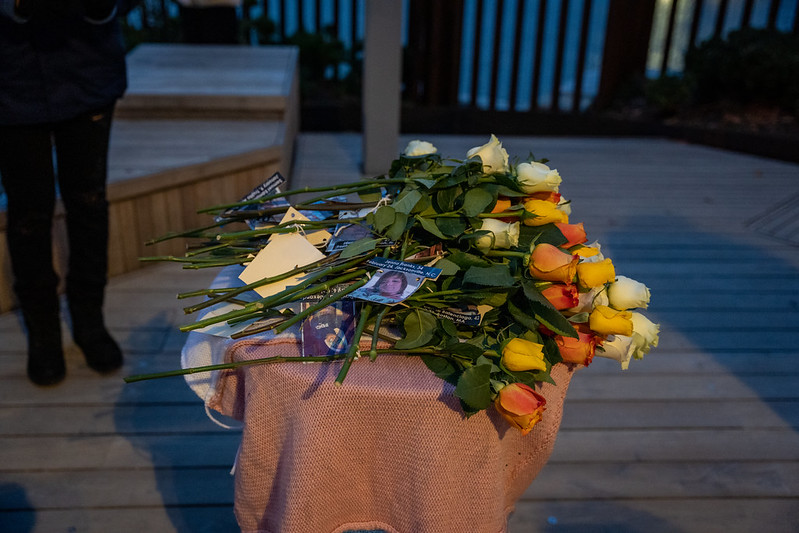 Roses were placed on a table to honor the trans lives that were killed this year at the Transgender Day of Remembrance at Little Island in New York City. On each stem was a picture of the person with their name and age. After each name was read, they placed the rose on the table until all of them were together. November 20, 2021. Photo by Nathan Morris

*The subject’s of the story asked for only their first names to be used for safety and privacy purposes.*

This year has been the deadliest on record for trans people. The US death toll is now at 47 compared to the record number last year, which was 44.

Allies and members of the transgender, gender non-conforming, and non-binary communities gathered at Little Island in New York City for Transgender Day of Remembrance on November 20 to honor those who were killed.

“There are volatile acts of harassment and violence against trans women, specifically Black trans women and trans women of color,” Nereyda, 24 said. “Going out in public can be stressful. We are constantly in a state of survival. I’m just trying to go through society without being punched or spat on for being who I am.”

Nereyda, who uses they/she pronouns, was one of the organizers and leaders of the vigil. They said Black trans women and trans women of color can experience transphobia, misogyny, and racism at the same time; making them more vulnerable to violence against them. 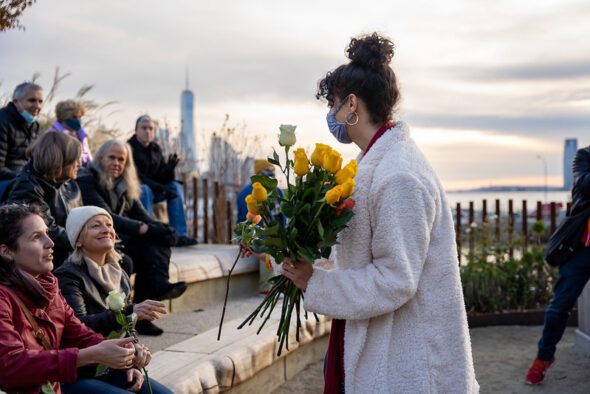 Nereyda hands out roses before the vigil at Little Island in New York City for Transgender Day of Remembrance began. The roses were provided to honor the trans lives that were lost this year. November 20, 2021. Photo by Nathan Morris

In a recent press release from the Human Rights Campaign, Interim President Joni Madison said the deaths of members of the transgender community stemmed from both bigotry and transphobia, and that Black trans women and trans women of color have been especially vulnerable.

Violence comes in many forms towards the trans community, physical, sexual, or verbal and they also face  discrimination.

A history of discrimination in healthcare, housing, and employment are other factors that can lead to violence towards the trans community. Between 2016 and 2019, the number of transgender people who were homeless increased by 88 percent. These intersecting hardships lead some trans women to do sex work to pay their bills. Especially in the US, trans women can be targeted for violence more more easily if they are known to work on a certain corner.

Dehumanization of and discrimination against trans people often begins with a longstanding history of anti-trans stigma, which also weaves through racism and sexism.

Gender non-conforming and non-binary folks have to navigate society’s expectations of traditional gender norms, even though they may not identify as any particular gender. For example, not all states have a non-binary option for the gender marker on a drivers license. As a result, not having an ID that matches how they identify can lead to harassment.

The history of traditional gender norms within society play a factor in the stigmatization of the transgender community. The characteristics of what differentiates a man and a woman have been rooted in the history of society, which can influence prejudice towards those that identify as neither.

“With all of the shit that we [trans and non-binary individuals] face, it makes it hard to trust people outside of our bubble,” Sugi, 34 said. Sugi, who uses they/them pronouns, has experienced being misgendered. They said it is something many non-binary individuals face, especially since many people are used to associating male pronouns to masculine presenting people and female pronouns to feminine presenting people.

Daiya, 19 joined fellow community members at the Transgender Day of Remembrance vigil to honor and remember the lives lost in her community. She said the most anxiety-inducing aspect of living as a transgender woman is the lack of societal awareness and education on not only trans issues, but general information on the trans community as well.

“Living as a trans woman can be daunting sometimes,” Williams said. “Not everyone is aware of the trans community, and there is also a real lack of information out there.”

With a lack of awareness and information regarding the community, a research study conducted by Pew Research Center showed that just 4 in 10 people say they personally know someone who is transgender.

“We are more than just trans and queer people,” Daiya said. “We are people. We matter.”

Transgender Day of Remembrance, began in 1999 as a memorialization to Rita Hester, a transgender woman who was killed the year prior. Since then, the goal has been to honor the lives of transgender, gender non-conforming, and non-binary people that were killed for being their authentic self.

Nereyda said the importance of TDOR is not limited to this year, but spans both past and present, as trans people were here generations before and will continue to be in the generations of the future.

“TDOR is a way to go against the erasure of the trans community and to remind society that we are here,” they said. They said it also provides the opportunity to affirm the identities of those who were killed.

Often, trans people who have not undergone a legal name change are subject to being misgendered in police reports, press, and death certificates. At the TDOR vigil, each name that was read were the names each person identified with, a way of honoring them for the person they always were.

“I wish this would be the last vigil I went to, but I know it won’t be,” Sugi said.

While this year included an increase in trans murders, some members of the community continue to remain hopeful; hopeful for a future in which they can simply exist without having to carry with them an explanation or burden for being who they are.

“I do have hope for the future of trans people,” Nereyda said. “At the same time, I also will not be naive. I don’t think violence against trans, gender non-conforming, and non-binary folks will end until well after I’m gone. But, I have to be hopeful because if not, what’s the point of anything?”