A Smoky Weekend in the Boston Common 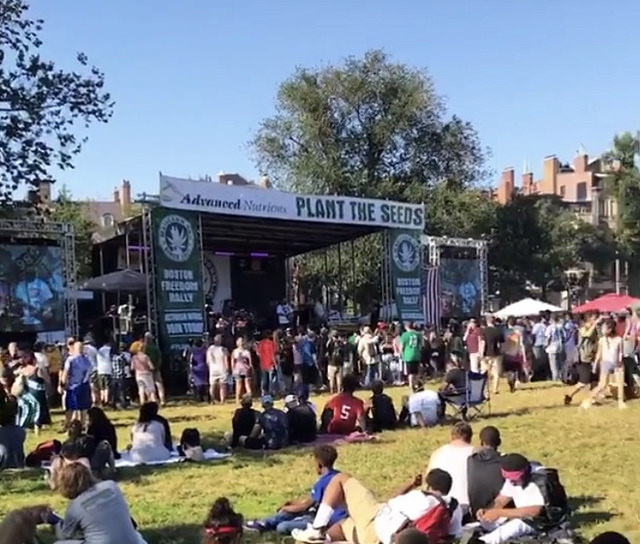 A distinct smell spread through Boston Common this weekend as thousands of revelers and activists alike participated in the annual Boston Freedom Rally — an event calling for marijuana law reform throughout the country.

One activist, Robert Forchion, also known as “NJWeedman,” encouraged the crowd to “Smoke it up, feel good.”

Some of the attendees were disappointed with the slow roll out of marijuana stores and vendors.

“We were supposed to be able to buy weed from July 1st,” said Francis Stevens, 34, of Jamaica Plain.   He has been attending the event for the past six years.

He claimed that local government and authorities are making it difficult for vendors to receive permits to sell marijuana.

But others celebrated the progress that had been made in marijuana reform.

“I mean I’m not super into weed, but I like to smoke every now and then,” he said. “Just to relax, you know.”

Although it is now legal to sell recreational marijuana in Massachusetts, the event’s organizers, the Massachusetts Cannabis Reform Coalition or MassCann, made it clear that selling marijuana at the Boston Freedom Rally was prohibited.

But that did not stop vendors from offering marijuana infused brownies and pre-rolled marijuana cigarettes as “gifts” along with the sale of other items. One stall offered marijuana plant T-shirts for sale that came with the “gift” of two pre-rolled joints.

“They need a permit to sell it, but not if they’re just giving it as a gift,” Hernandez said.

Throughout the day crowds listened to live music, political speeches and informative discussions in the makeshift “Education Village.” One session focused on the medicinal value of marijuana in treating cancer, while another offered business and social media advice for aspiring marijuana entrepreneurs. The sessions ended with a discussion of the history of marijuana prohibition.

But not all Boston residents support the annual event, often referred to as “Hempfest.”

“The Common is one of the most beautiful parks in Boston,” said Gloria Puccini, who has lived in South Boston all her life.

“They come and trash the place and then the city has to clean up after them,” said Puccini. “It’s disgusting”.

Tony Di Pietro, 64, a Back Bay resident, was also critical of the event.

“There’s kids there,” said Di Pietro. “I get that it’s legal now but I don’t think it’s safe for our kids to be exposed to that sort of thing”.

According to Stevens, the annual event has survived numerous complaints, lawsuits and legal challenges over the years.

“They’ve tried to get it shut down, but there’s nothing they can do,” said Stevens. “It’s our right. Our freedom.”