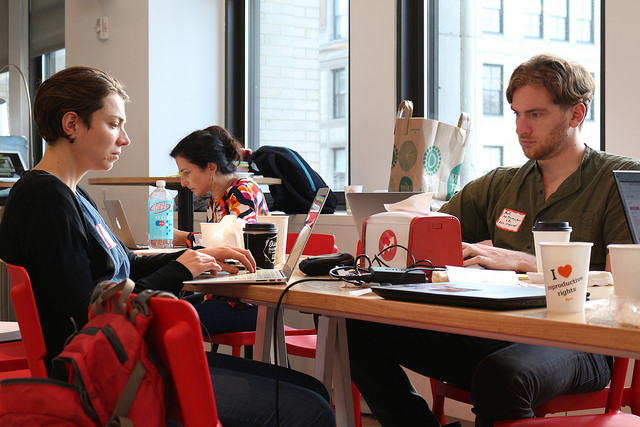 In the waning light of yesterday evening, 100 hundred participants of the Abortion Access Hackathon typed away on their laptops at Buzzfeed’s office in Gramercy Park. But this was not your typical fast-paced coding event competition, inspired by the tech bro culture of Silicon Valley.

Instead, the Abortion Access Hackathon facilitated collaboration between two groups who rarely ever meet: abortion advocates and technology experts. Together, teams did not compete for the best idea, but collaborated to build projects — like basic websites and databases — that would increase access to abortion.

The idea for the Abortion Access Hackathon originally came from Shireen Whitaker, 33, one of the event organizers from Sacramento, California. While working at an abortion provider, Whitaker’s team had decades of experience in the field but little knowledge about how technology could advance their work. She and another organizer of the hackathon, Emily Loen, 36, of Northern California, started to look for tech experts who would donate their expertise to the organization.

“Pretty much all of the people who worked (at the provider) had worked there since the ’70s when it started,” she said. We were the only ones who knew how to do anything digital or tech-related. We needed tech intervention from experts but didn’t have the resources to pay for it.”

Whitaker’s experience is a common one. Underfunded and understaffed, many abortion clinics and advocacy organizations do not have enough money or paid staff to engage software designers or engineers, whose expertise is often costly.

Dan Staples, 32, an engineer from Baltimore, Maryland, who works at National Network for Abortion Funds (NNAF), said the hackathon helped many groups for which basic technology, like a working website or database, is usually inaccessible.

“NNAF works with 70 local and regional abortions funds, many of whom do not have any paid staff and all have very limited budgets. Hiring tech consultants, web designers, and app developers is out of reach for them,” he said.

But the introduction of basic technology, such as a working website or searchable database, can make a crucial difference in the work of abortion providers, advocates and clients.

At this weekend’s hackathon, one of the teams improved the visuals on a website called ExposeFakeClinics.com. The website, which includes a short form that visitors can fill out detailing their experiences with crisis pregnancy clinics, was fairly basic. But it could save advocates hours of precious time in finding a provider when working with a patient for whom every minute counts. For a small nonprofit or provider’s office to code such a website without the expertise of an engineer would have been arduous and time intensive, if not nearly impossible.

“People who work in abortion care are very busy and their focus is client care,” said Wendy Robinson, 73, a board member at Abortion Conversation Projects from Western Massachusetts. “They don’t have hours to be Google searching. The small things make a big difference.”

The New York City Abortion Access Hackathon was preceded by two eponymous events earlier this year in California. For the organizers, engaging the unique creative and technology in New York City was tantamount.

“After our event in March, people kept saying, ‘When are you coming to my town?’ New York City is unique in that everyone in the abortion world (here) talks to each other, Loen said. “But I don’t know if they were talking to tech. We are here to modernize abortion access. Bringing people with an incredible amount of knowledge on the subject matter along with tech folks is the easiest way to make that happen.”