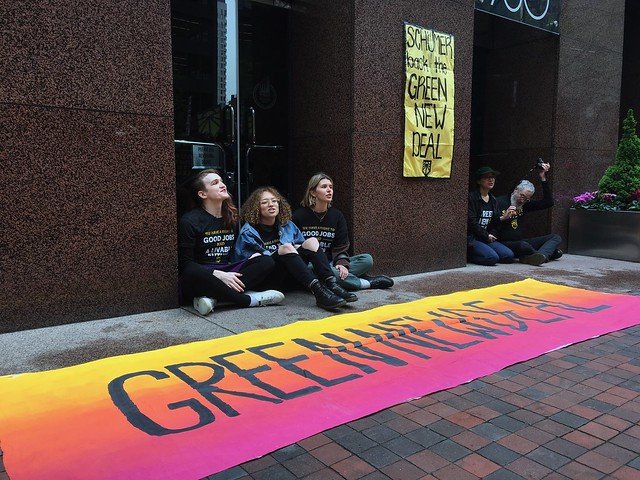 Protesters block the entrances to Minority Leader Chuck Schumer’s Midtown Manhattan office. They  want to make a statement about their commitment to getting the Green New Deal passed. Photo by Emma Bolton.

Environmental activists are still pressuring lawmakers to embrace the Green New Deal, despite that it has already been voted down in the Senate.

While Senate Minority Leader Chuck Schumer has said that he believes in climate change, he’s been dismissive of the Green New Deal. In place of the deal, he’s tried to push his Republican colleagues in the Senate to acknowledge the urgency of climate change and have open discussions about its effects, but activist Iliana Walsingham said this is not enough.

“Opening up conversation is good, but we should have done that 10 years ago,” said Walsingham, 21. “Now is the time to have actual action. We need to change.”

Walsingham is one of many asking for more action regarding climate change. On April 30, around 50 protestors from the Sunrise Movement, a group dedicated to making climate change a more visible and pressing issue, assembled on the sidewalk outside Schumer’s Midtown Manhattan office. For more than two hours, they gave emotional testimony, sang passionately, and repeatedly called for the senator to support the deal.

The group refused to leave the site, and eventually, law enforcement stepped in. Walsingham was one of seven activists arrested for blocking pedestrian traffic and refusing a lawful order to disperse. But for her and the others, the cause is what’s important.

“I think we need to hammer home that climate change and this climate catastrophe is going to affect everyone worldwide,” said Walsingham, before the start of the protest.

The Sunrise Movement, founded in April 2017, latched onto the Green New Deal resolution, brought forward by New York’s District 14 Representative Alexandria Ocasio-Cortez and Massachusetts Senator Ed Markey. In addition to protests and rallies outside of lawmakers’ offices, they’ve also hosted town halls across the country explaining the Green New Deal to the public.

The Green New Deal proposes modernizing the country’s energy infrastructure by transferring it away from fossil fuels, while creating jobs and dealing with economic inequality in the process. The resolution calls for government public work investments on the scale of Franklin Roosevelt’s 1933 New Deal to decarbonize the country’s energy and transportation sectors.

Carolyn Kissane, New York University’s Director of the Energy and Environmental Policy Concentration, said that the Green New Deal has caught the public eye because it’s a bold policy resolution centered on mitigating the effects of climate change.

“It’s extraordinarily ambitious,” she said. “We haven’t had a climate-specific political agenda in quite a long time.”

Support for the Green New Deal exploded after it was officially proposed by Ocasio-Cortez and Markey in February 2019. For young people like Jessie Bluedorn, 24, there are two main reasons to support it.

“We need more than just nice words. We need a plan that holds us to a to actual timetables,” Bluedorn said. “The Green New Deal lays out a specific deadline by which we would need to be off fossil fuels. So any plan that has strict accountability is something I would very much be for versus just generic, ‘we’ll eventually get off of fossil fuels.’”

While it’s not the only way to help reduce the effects of climate change, lessening dependence on oil, coal and natural gas is important in curbing carbon emissions. The plan will also decarbonize transportation and make buildings in the United States more efficient. For Walsingham, the plan’s focus on significantly reducing dependency on fossil fuels is a huge draw.

“We need to get off of fossil fuels,” Walsingham said. “We need to stop producing single use plastics, we need to basically lessen consumption. But basically switching to an electric infrastructure grid is the most amazing part of it.”

Policy experts like Kissane note that the timeline is largely unrealistic — the plan calls for sweeping changes to be implemented within ten years —  but the resolution makes a statement about a way to approach creating a greener society.

“I think the idea of thinking about policy and ways to go about reducing carbon emissions– I’ll be honest with you, we’re not going to be carbon-free by 2050, we’re not going to be fossil-free by 2050, nowhere near it,” Kissane said. “But the idea of what are the things that we can do now? What can we do more on energy efficiency? What can we do about thinking about our energy systems in the United States?”

While the large scale transition away from fossil fuels and towards renewable energy is the top priority for the activists, the other factor is the social justice and economic equality aspects of the plan. It’s the other reason Bluedorn attended the protest.

“As we have seen globally with the Yellow Vest Movement in France, to effectively transition off fossil fuels, we really have to build in a just transition framework and acknowledge that some people are more impacted than others,” said Bluedorn. “So, there has to be a jobs guarantee and a serious plan for how we are going to transition our economy that is not going to leave certain people more impacted than others unfairly.”

As of now, the plan will remain a statement of ideals. In March, Senate Minority Leader Mitch McConnell (R-KY) brought the plan to the floor, forcing Democrats to vote on it. Senator Schumer called it a sham vote, while moderate Democrats like Senator Joe Manchin (D-WV) and Senator Debbie Stabenow (D-MI) said that the plan was too broad, non-specific, and unrealistic. The resolution failed in a 57-0 vote, with four Democrats crossing the aisle and the rest of Democrats voting “present.”

Chair of the Technology and Society Department at New York University’s Tandon School of Engineering, and historian, Jonathan Soffer, sees why aggressive climate change plans are harder for politicians to back.

“This is our generation having to make changes mostly for the benefit of future generations,” Soffer said. “And that’s a virtuous thing, but a lot of people aren’t willing to make those sacrifices if they don’t see immediate benefits. That’s always a harder sell politically.”

As the head of a large caucus in the House, Speaker Nancy Pelosi has been reluctant to get behind the resolution. She was the focus of Sunrise Movement protests in Washington D.C. last November, ahead of Ocasio-Cortez’s official swearing in. At one point, she referred to the plan as “the green dream, or whatever they call it.” Like Schumer, she has talked about climate change in the general sense, although last week she initiated a vote to block the Trump Administration from pulling out of the Paris Climate Accord. 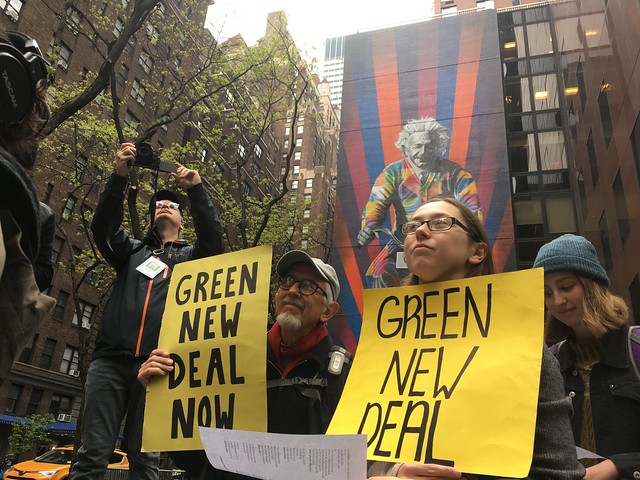 Natalie Osborne receives instructions and a song sheet from the protests organizers. Photo by Emma Bolton.

Natalie Osborne, 21, sees the Green New Deal as one of the only ideas that politicians have put forward that addresses climate change. She attended the protest outside of Schumer’s office, and hopes to see the deal become reality.

“I think the Green New Deal is the big one for right now,” Osborne said. “And it addresses a lot of different issues. It addresses racial inequality and income inequality and how they tie in with climate change and climate disasters.” 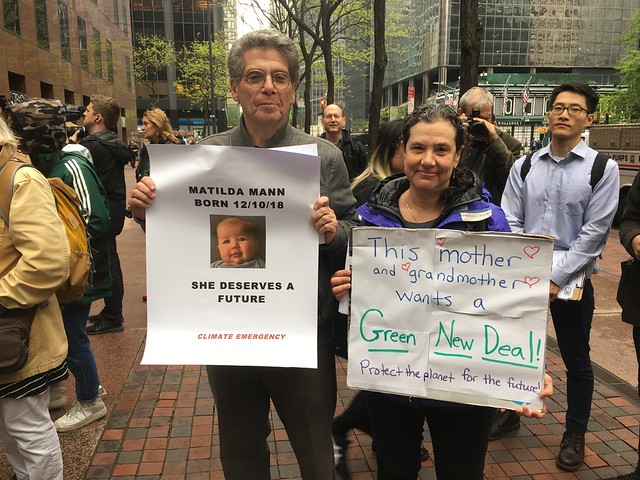 Stu Waldman and Gloria Weiss attended the rally to support the young people pushing for a greener future for their grandchildren. Photo by Emma Bolton.

The Sunrise Movement is largely comprised of Millennials and Gen-Zers, but there were some notable exceptions, including Stu Waldman, 77, who clutched a picture of his young granddaughter as he stood among the younger activists.

“Matilda is five months old,” Waldman said. “When she’s my age, it will be near the year 2100, and if we don’t do something very quickly in the next ten years, the world — her world — will be unrecognizable.”

A study from the Intergovernmental Panel on Climate Change shocked the world in October 2018, showing that the timeline to slow the warming of the atmosphere is much shorter than previously thought. According to the study, the world has less than 12 years to drastically curb carbon emissions — otherwise, the worst consequences of climate change will start showing.

Communities across the world are already feeling the effects of rising temperatures, including here in the United States, with more frequent severe weather events. Just this week, the United Nations released a preview of a new report showing that humans and climate change have pushed close to one million species of plants and animals to the edge of extinction.

In the face of dire predictions and a lack in federal leadership, cities like New York  are making their own climate change policies. New York City has created their own Green New Deal, which would use congestion pricing to lower carbon emissions, and retrofit existing buildings to be more energy-efficient. Entire states, including California, Vermont, and Massachusetts have created their own plans to stay in the Paris Climate Accords, even though the Trump Administration has pulled out.

Experts like Kissane believe these city and state-based policies are an indication of what the Democratic party may do in the next election year.

“I think the Democrats are aware that [climate change] is going to be a pivotal issue going into 2020,” she said.

Sunrise activists are looking to Democratic leadership to take on the issue of climate change and that extends to the presidential race. Last week, as his first major policy proposal, presidential hopeful Beto O’Rourke announced a plan to put $5 trillion dollars towards addressing climate change within his first 100 days as president.

I think some of the candidates are doing a great job addressing it,” Bluedorn said. “It’s still very early in the primaries, so I am not fully backing a candidate, but certainly I am using climate as a litmus test for any candidate.”

Senator Schumer and Representative Ocasio-Cortez were unavailable for comment.