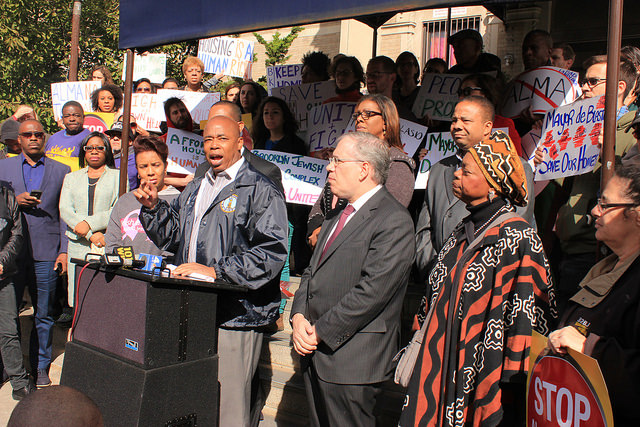 “Where am I going to live as a single mom?” asked Alethea Adsiet, a PE physical therapist for the New York State Department of Education in Brooklyn. To raise her child alone, she is also working as a dancer and choreographer—and still barely making her ends meet. “This is my home, I have lived here for 11years, but now I may have to leave.”

Adsiet said she was shocked when she received the market rate lease renewal from Alma. “What happened to my rent stabilization?” she asked.

The Crown Heights complex was part of the former site of Brooklyn Jewish Hospital—a property around Prospect Place and Classon Avenue in Crown Heights, Brooklyn, which was purchased by Alma in the early 2000s. When the tenants sighed the lease for the first time, they were offered a rider from Department of Housing and Community Renewal promising that these unites were rent stabilized and were protected under the Emergency Rent Stabilization Act.

“Alma wants to deregulate all of the apartments here,” Adsiet said. “I cannot afford this high rent. I think I can’t afford to live in this city anymore.”

Over the past decade, while rents in Crown Heights community have increased dramatically, the Jewish Hospital complex remained affordable—this made it a choice for living for young professionals and the working class.

“I was specifically looking for rent stabilized housing and I found this one,” said Elizabeth Glowierht, who just graduated with her master’s degree in social work and has lived in the building for five years.

“I would never have moved in here if I had known that this wouldn’t be a long-term residence for me,” she said.

Community leaders think that the increased rent not only affects the tenants’ quality of life, but also the diversity of the neighborhood.

“What we want is the preservation of affordable housing and diversity in our borough,” said Brooklyn Borough President Eric Adams. “So that the working class doesn’t have to struggle to stay.”

Adams said this is a citywide issue and believes there is great possibility that Alma will apply the same action to its residences in other boroughs.