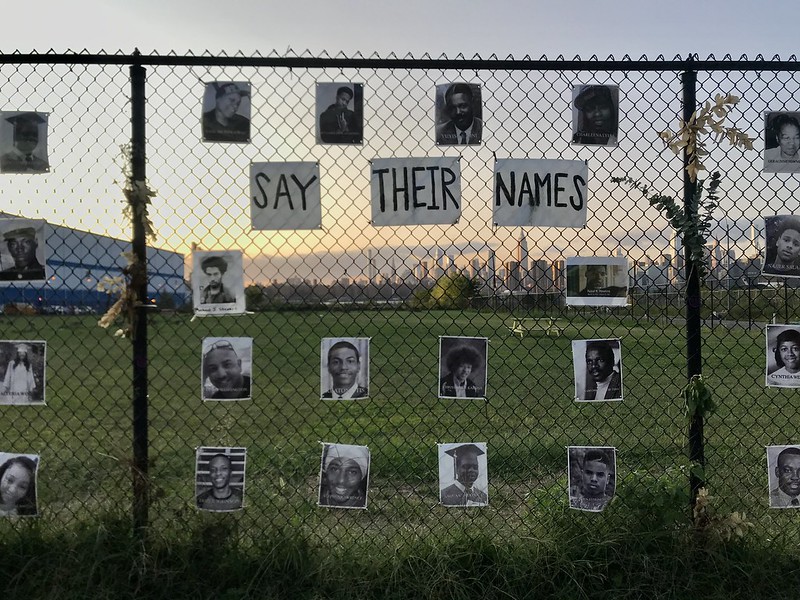 Photos of African Americans killed by police hang on a fence in Greenpoint, Brooklyn. Photo by Courtney Guarino

The  deaths of Breonna Taylor and George Floyd, among other racist killings at the hands of police, have spurred protests globally and left people of color stressed out and struggling.

Richard Battle-Baxter, a 38-year-old black male of New Jersey, said he finally feels like white people are starting to show they care. And while he appreciates these gestures, it’s not enough. He wants them to truly flip the script and understand how they benefit from systematic racism.

“It’s not our problem to fix, because we didn’t create the system,” Baxter said. “What is my participation in it now?” “How did I benefit from the system as it is now? “And how did my ancestors benefit from it?” Understanding that from a white person’s perspective will give them more insight into why there is a disconnect in our system.”

And while Baxter is somewhat hopeful for the future, he’s doing his best at the moment to manage his stress.

“Think about the opportunity cost of the productivity loss of the entire black population because we are dealing with what’s going on now,” Baxter said. “We know that these murder have been happening. It’s been a conversation for us but we’ve had to suppress it. It’s the suppression of these feelings that has been stressful.”

Meka Seymour, a 26- year-old black woman living in Harlem, is finding her own way to navigate her feelings. She is doing what she can to volunteer, organize, and educate herself.

“I feel extremely heavy and burdened some days by what is happening right now,” Seymour said. “Peers see this education as an academic exercise. This isn’t an exercise for me. I feel stressed out and it’s scary to think you still have to argue for your humanity in society”.

Growing up as a light skin African American woman, living in a predominantly low income black neighborhood, Seymour does not recall experiencing a lot of racial transgressions. She does recall facing colorism, and feeling caught in the middle.

“I’m what people refer to as light skin. People would tell me I have good hair,” Seymour said. “It has been communicated to me since I was a little kid that I am a more acceptable brand of black. I thought that was just how society worked. And that’s a problem.”

Haroon Saleem, a 42-year -old Pakistani living in Los Angeles, said he’s not surprised at all by what is happening. Saleem faced routine discrimination as child, being called racial slurs and getting beat up on the playground for being Muslim. It led to depression issues he still battles with today.

“When you come from the amount of s–t we have, this is not as shocking as it might be for other folks,” Saleem said. “We have to fight for normalcy, have conversations and be diplomatic. What our country is going through is a much needed reckoning.”

Just a few days after the election of Donald Trump, Saleem was at a gas station when a couple nearby said, “Y’all need to get ready to go back.”

“That was a gut punch for sure,” Saleem said. “I’m an American citizen.”

Despite the racism he has endured, Saleem does his best to remain positive.

“There has been a lot more of a reaction and people acknowledging that this is an issue. And you want to remain positive because what’s the inverse?,” Saleem said. “I would much rather focus on doing everything possible to better this situation than throwing in the towel.”

And despite the protests and attention on race and police brutality, Baxter still fears for his life walking out of his front door, a fear he’s carried with him since childhood. A fear that, he said, is rooted in knowing things can start small but end up deadly.

“You turn on the TV and you see, stop killing black men. I think, wait a second, I’m a black man, stop killing me,” Baxter said. ”We’re not asking for much. We just want to be equal.”