An interfaith gathering before the climate march 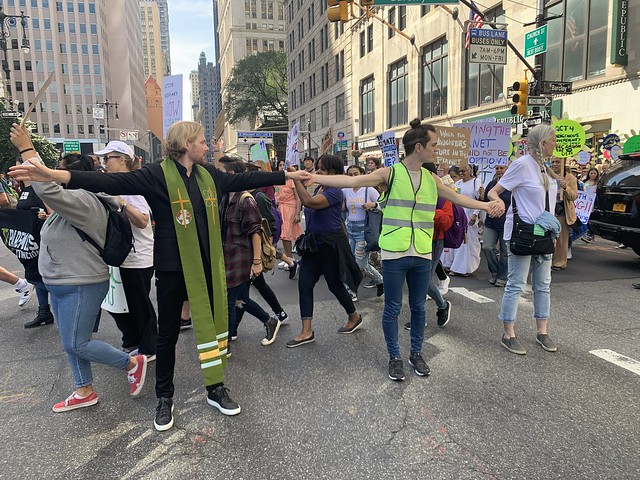 A human chain is created by religious leaders for protestors to cross the street on Barclay and Broadway streets in Lower Manhattan yesterday. Religious leaders joined an estimated 60,000 protestors at New York City’s  climate march. Photo By Jonathan Sarabia

Before yesterday’s climate march in New York City, protesters waited in line outside of St. Paul’s Chapel of Trinity Church in Lower Manhattan to prepare for the strike. It was an interfaith gathering of parents, teenagers and children.

They were handed buttons that said, “Your on Holy Ground. Act like it”.  They were given supplies to create posters and a light breakfast before hitting the streets.

Azalea Danes, 16, a climate activist, member of Trinity Church choir, and co-organizer of the strike, brought the attention of the climate crisis to the church leaders. She asked them if they would try and mobilize the Trinity community and others for this cause.  And they did.

After being introduced to the excited crowd in the church, Danez thanked everyone for taking action.

“I am so hopeful and overjoyed with the prospect of all of you coming here and mobilizing for justice and for the justice of our planet,” said Danez.  “I am positive that the mobilization of youth and adults that will be coming together today, will be able to inspire every single person in New York City and all of you become true climate justice activists. If your here today you already are a leader because you are standing up in your community to be a force of change.”

Students decided to skip class to make a clear statement about climate change. They  felt the responsibility of fighting for the world that would be passed onto future generations

Roselani Beguero, 17, a senior and president of student government at Murray Hill High School  in Manhattan, was waiting at Foley Square when she heard that the church was providing breakfast and posters and decided to join in.

“Our world is dying and nobody is doing anything about it,” Beguero said as she worked on her poster. “If we all stand as one then we can possibly make some kind of change. If they don’t change the laws then they can’t change the world.”

Beguero does not see the actions she believes should be taken. She wants a world where her children and great grandchildren can live.

As the crowd began to finish their posters. A priest walked to the front of the church and provided directions and safety measures before the group stepped out in the street. Children were asked to bow their heads for a moment of silence.

Afterwords, a group of volunteers walked to the front holding a poster. The crowd was asked to repeat each verse after them.

Sk Doyle, 24, works for Trinity  Church’s  Justice and Reconciliation department and was managing the poster station. The young people  were able to pick from a variety of colors to paint their signs.

“I’ve been really hopefully being here and seeing all these young people doing the work,” said Doyle.

The group left together for the rally at nearby Foley Square. When crossing the street on Broadway and Barclay, the priest and two volunteers grabbed each others hands creating a human chain to stop traffic and allow everyone to cross together.

After the rally at Foley Square, the group joined the estimated 60,000 marchers, who chanted and carried signs that pleaded to save the environment.

“Climate change is a real thing it’s affecting us all in our daily lives,” said Elena Mendoza, 17, a senior and Green Team President at Forest Hills High School in Queens. “Even if some people might not see it. They need to look closer and realize that we don’t have much time.“