Apple fans again line up for the latest iPhone 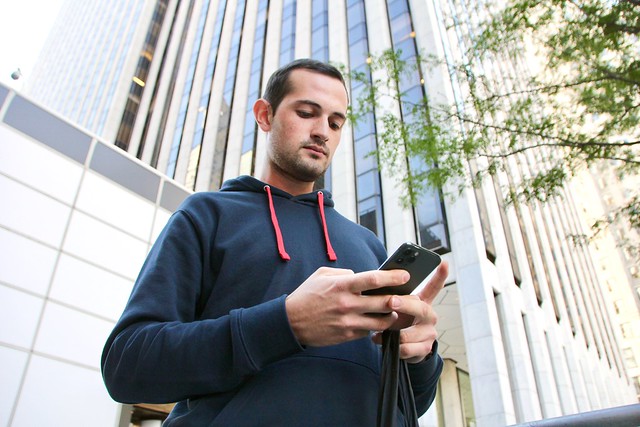 Pierre-Antoine Benoit, an international student from France, explores his new black iPhone 11 Pro after a 4-hour wait. Benoit got in line at 7 a.m. and said he is most excited for the new triple camera system. Photo by Shiyu Xu.

Hundreds of New York Apple fans lined up for hours outside the reopened 24-hour Fifth Avenue store as the new iPhone 11 officially went on sale this morning.

While most people chose to preorder online or purchase through phone carrier partners, many Apple fanatics said the lineup is an established tradition to experience and honor.

Pierre Antoine Benoit, an international student from France, joined the line around 7 a.m. and finally got his new iPhone 11 Pro in black after four hours.

“This is an event you have to experience and live,” Benoit said. “It’s not only about buying stuff. With the store reopening and new releases, today is very unique for me.”

For Andy Wang, who has been in line for almost five hours, lining up for new Apple launches has been his routine for years. Wang said as long as he is among the first to get their hands on a new model, it would be worth the wait.

“This is something I always do because I’m a big Apple fan,” Wang said. “Whenever something new comes out, I always try to be one of the first people to get that new product. It’s a must-do for me.” 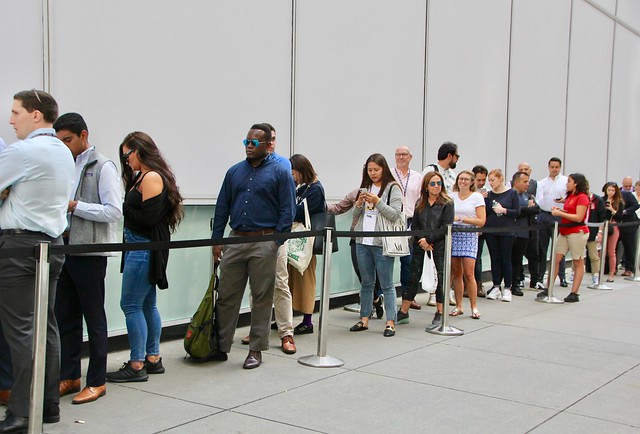 Hundreds of Apple fans line up for hours outside the reopened Apple store on Fifth Avenue on Friday morning for the new iphone release. For many of them, long lineup is a tradition to experience and honor. Photo by Shiyu Xu.

Even for those who didn’t come to purchase, lining up for hours is a way to celebrate the big iPhone launch as loyal customers.

Tony Strouble from Brooklyn got in line around 9 a.m. and said he is holding out for a 5G iPhone, which is expected to be released next year.

“I came here today just for the experience,” Strouble said. “It feels good to be present here to witness how fast technology changes. If you are not an Apple person, be an Apple person today.”

Among the new features of iPhone 11 series, customers are most excited about the triple-camera system and better battery life.

“For me, I bought this iPhone 11 Pro mainly for the camera and battery,” Benoit said. “From now on instead of carrying my heavy camera, I can just use my iPhone to shoot 4K videos for a decent amount of time.”

Around the corner at the plaza on Fifth Avenue, Android user Forest Zhou found the intense lineup “very absurd.”

“I would never ever spend a day just waiting for a phone device,” said. “I chose a Samsung phone because I have more freedom to customize my liking. My phone has been working great so it’s just not worth for me to switch over with that much money only for a camera feature.”

Research from IDC suggested that for the second quarter in 2019, global smartphone sales declined 2%, and Samsung was the biggest smartphone seller in the world followed by Huawei then Apple.