Art is a cure 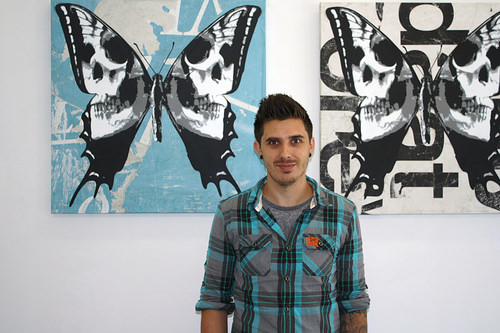 British artist, Rich Simmons, has used art as therapy to overcome a host of issues. His show opened

“If you find your art form and creativity that could be a key to you,” said Simmons, 27, a rising international artist, at the show’s opening event. “If it’s 3 o’clock in the morning and you know you can write poetry and that makes you feel better, you can pick up your pen, that’s your little key, and you can unlock your straight jacket by writing something, and then you feel free.”

Simmons of London, England said that art was the medium that saved his life and that he is passionate about sharing his story with others that are also suffering from similar problems.

Staring at his painting of a butterfly, Simmons described what depression feels like, and how important it is to find an alternate release to channel your problems.

“You feel like you have this invisible straight jacket on, that’s what depression is to a lot of people, you can’t see it, but you feel trapped and you can’t get out, you can’t break the chains, and that stresses people out and it makes them upset,” said Simmons. “They need to find a release to break out of it, and it’s making people realize that if you find your art form and creativity that can be your key.”

His key was art. Simmons dealt with each of his problems separately on a canvas, trapping his demons in his works. Rather than using razor blades, drugs, or alcohol, he used a paint brush and spray. Simmons built his inner self, leading him to create a new genre of street pop art that explores the beauty of being yourself.

But his art work isn’t his only masterpiece. Simmons also founded an organization, Art Is The Cure, inspiring others to turn their negatives into positives through expressive art therapy.

“Art Is The Cure is promoting self therapy, it’s not saying go and sit down with a therapist once a week,” said Simmons. “It encourages people that you can find a release on your own, on your own time.”

Jolie Roberts, 24, of Manhattan, is a fan of Simmons and an advocate for expressive art therapy. She used art as a child to help her overcome anger and violence.

“It’s unreasonable to believe that every human being on this planet is able to thoroughly express themselves verbally, especially those with disabilities,” said Roberts. “The foundation of expression must be through the body.”

As a 3- year-old child, her parents underwent a difficult divorce, leaving Roberts with problems expressing herself. It wasn’t until her parents put her in expressive art therapy classes that she learned to use different mediums besides verbal communication.

“It saved my life,” said Roberts. “From a very young age, I learned how to be in touch and available to myself. It is the reason why I am so available to others.”