Artists get priced out of rising NYC rents 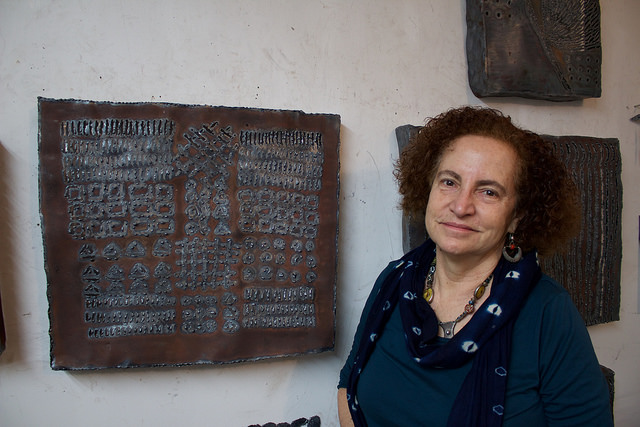 Janet Goldner, sat in her 300 square foot studio space in South Slope Brooklyn. Void of windows, her only ventilation is the hole in the center of the ceiling. It is the last room on a cold hallway of closed wooden doors and concrete floors. She is a welding artist, something she describes as an added difficulty when it comes to finding affordable space to work.

“Welding is particularly difficult to find a place you can do it in New York…it’s not dangerous, but people think it’s dangerous,” Goldner, 63, said.

She bought a loft in Tribeca, where she lives now, over 30 years ago. That’s where she used to weld before her neighborhood changed into what she described as “gentrified beyond anything.”

“Tribeca got too fancy to get welding gas deliveries,” Goldner said.

In recent years gentrification has taken New York by storm, boosting real estate prices, ushering in big businesses and giving a facelift to historically impoverished neighborhoods. Rents have risen and so have the cost of artist studios.

“Artists are paying more for less square footage,” said Jenny Dubnau, an organizer for the Artist Studio Affordability Project (ASAP), an effort that began in 2013 after a group of artists were priced out of their studio space in Sunset Park’s Industry City.

“My first workspace was probably about 50 cents per square foot: it was in Williamsburg, Brooklyn in the late 80’s,” Dubnau said.

Now, she said she pays about $2 per square foot, which is considered a “good deal” though it is at the higher end of what she and most artists can afford.

What artist paid $400 in the late 1980’s, they would pay roughly $1600 today for approximately the same amount of space.

Half of a 360 square foot shared studio space in East Williamsburg is going for $472.50 a month according to New York Foundation for the Arts, an organization dedicated to empowering artists and art organizations.

While tight living and workspaces are not unique to New York City they do present big challenges for working artists because the size of studio space effects the size of the work an artist produces.

“I cannot have a small space because I have big sculptures and I have to store it somewhere,” said Gabriel Koren, 68, an artist who creates life size sculptures.

She is currently facing eviction, due to a raise rent, that she can’t afford. She lives and works in a 1000 square foot studio space, that she says in unlivable, her move out date is Dec. 31st.

“I don’t know what will happen, I don’t know,” She said through tears. She has no where to put her work once the time comes for her to leave her DUMBO, Brooklyn studio.

“I don’t have a place to stage them and they can throw [them] to the garbage,” Koren said in tears over her Dec. 31st move out date.

Because Koren’s work is life size, her studio space has to be large enough to accommodate it, which she said could be upwards of $2500.

The city has made strides towards remedying this issue of affordable workspace, through mayor De Blasio’s initiative to have the city build 1,500 artist live-work spaces by 2024 for New York City’s artists, which is part of his Housing New York Five-Borough, Ten Year plan. But many artists feel that this will only benefit a small portion of artists and would much rather prefer separate living and work spaces.

“The projects that are coming down the pipe are like a drop in the bucket compared to the need,” said artist, Rejin Leys as she sat in her workspace that has dwindled to a small room on the second floor of her Jamaica, Queens home.

Leys, now in her 40’s has lived in New York City all her life and has had several work studios over the years, each move affecting the size of the work she creates.

“I feel like ideally housing and workspace would be addressed separately because there will never be enough artist housing for everyone,” Leys said.

She feels that the construction of live-work spaces in low-income areas essentially makes the incoming artists gentrifiers. While the needs of one community are met “there will still be a housing crisis for everyone else.”

This is why Leys said she, along with Dubau support ASAP’s efforts to secure “commercial space for people to work and housing for people to live” which she said will benefit artists, small business owners and local community members.

With all the efforts that have gone into addressing the issue of gentrification and its adverse effects on New York City’s artist community the fact remains that each artist faces unique issues with varying levels of severity.

“I feel like in the past I made it work better than I can figure out how to make it work now,” Goldner said. “It was expensive but possible, and now it’s expensive and impossible.”