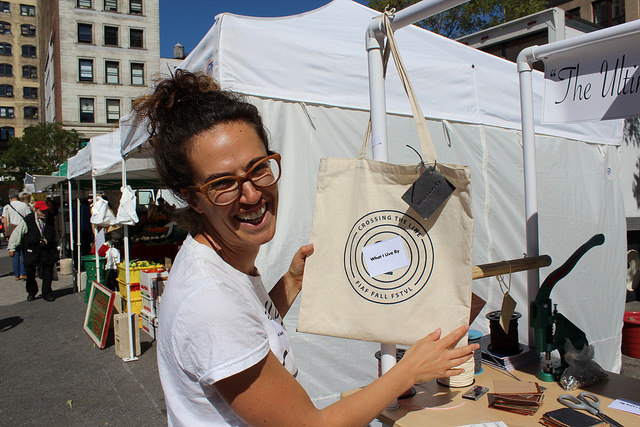 It’s late morning on Wednesday and the Union Square Green Market is already bustling with people. Everything from fresh produce to goat cheese yogurt is available for purchase and vendors are already tending to crowds, even before the lunchtime rush ensues.

Elana Langer, can be spotted on the north side of the square among the throngs of shoppers, slightly flustered and hurriedly assembling her stand. She isn’t selling jams or cheese like her neighbors, though. She is an artist and today Union Square Green Market is her gallery.

Langer has posted up for her second consecutive Wednesday at green market to showcase her art installation, WhatILiveBy. The project is what Langer calls the first global brand that does not sell a product. Instead, Langer asks participants to purchase either a leather tag, iron-on patch, or sticker logo with the words “WhatILiveBy” on them to attach to a current possession. The aim of the campaign is to transform current possessions, like a handbag, into locations to affirm personal truths without contributing to the consumer culture that often promotes a false sense of value.

After participants select their WhatILiveBy logo which cost between .75 cents and $3, Langer asks them to enter her “selfie-booth” which is adjacent to her stand. Here participants have a moment to consider what it is they live by and then take a photo with their new tag as an act of affirmation. From there, they write what they live by on the photo which is posted for others to see and draw inspiration from.

“We don’t have moments to just drop into ourself. Like when do you take a moment when you’re shopping to just think is this the person I want to be? Is this what I want to do?” said Langer. “I think that that’s really important.” 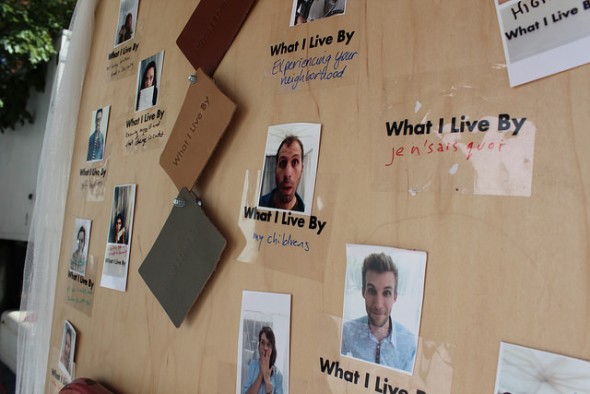 WhatILiveBy logos hang next to photos of individuals who have participated in the art installation. Photo Credit: Elizabeth Arakelian

The installation is unique in that through the exchange of money individuals are still participating in consumer culture, but in a positive way that benefits their sense of self. The logos cost just enough to cover Langer’s costs.

“When an art project doesn’t connect with the world we’re in, we’re not doing each other a service,” said Langer, noting that if it were free people may take the affirmation less seriously. “This is a practice and an invitation to invest in yourself.”

Langer said she hopes her project will bring an element of thoughtfulness to people so that they can connect with their inner truth and true value. This was exactly what one market goer, Louise Howard, was looking for.

Howard, 52 of Midtown East, stopped by the market after her spin class where her instructor had said something that left Howard with an element of inspiration.

Howard said she lives by her heart in doing what is right.

Elizabeth Seldin, 30 of Astoria, made a more intentional trip to Langer’s installation, requesting that a coworker cover the phones so that she could run over to experience WhatILiveBy, something she had heard about through a mutual friend of the artist. 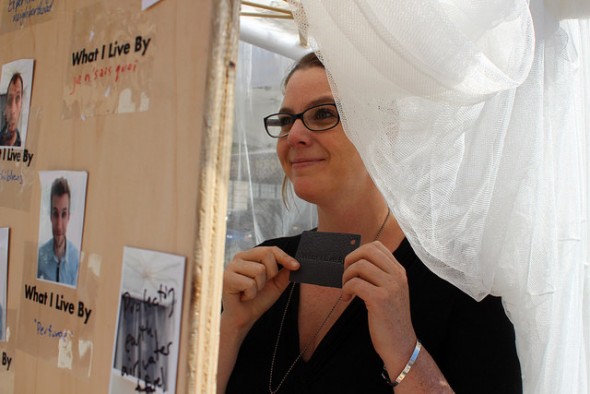 Elizabeth Seldin poses with her WhatILiveBy leather tag, a symbol of her commitment to finding value in herself. Seldin said she lives by creativity and love. Photo Credit: Elizabeth Arakelian

“It’s awesome because it brings into an active practice what I already try and explore in my own life,” said Selden, noting that she lives by creativity and love.

Regardless of what people’s guiding principles are, Langer said she hopes that her installation encourages participants to pause and identify with what they live by so that they find contentment beyond consumer culture.

“The idea is that what you’re already carrying is the most valuable thing, which is yourself,” said Langer.

Langer’s final pop-up installation at the Union Square Green Market will be next Wednesday, Sept. 30. Langer is one of several artists selected to showcase their work through the French Institute’s Cross the Line festival which is an international festival to celebrate provocative and interdisciplinary works that runs through Oct. 4.