Baseball is back at NYU 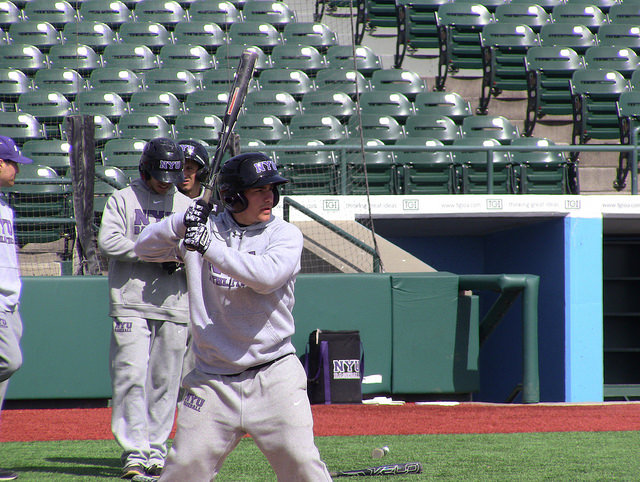 It was a sunny day in Coney Island, not a cloud in the sky. The boardwalk was quiet on this March afternoon, the waves were loud, the seagulls louder. The noisiest sounds were coming from the big ballpark on Surf Avenue, usually a desolate place this time of year, but not anymore. The sounds from MCU Park were unmistakable, bats clanging, mitts popping, seeds cracking; it was the sounds of baseball.

Responsible for that racket were students from New York University. It has been 41 years since the Violets had a varsity baseball program, but thanks to a merger with the Polytechnic School of Engineering, that void in the athletic department is no more.

“Its pretty cool, we’re making history, so 50 years down the line we’re going to look back at this and it’s going to be a good memory,” said Andrew Cilento, the team’s second basemen.

Despite the two schools merging nearly seven years ago, after Polytechnic University fell under financial trouble and NYU wanted to replace an engineering program that diminished in the 1970s, the athletic departments for both institutions had not fully immersed until this year. Previously the two universities had separate athletic teams, but now both student bodies comprise a single team for each sport, including baseball.

“Once it was determined that the athletic departments were going to merge, I believe that the fact that they already had baseball, were the impetus for us to add baseball,” said Jeffrey Bernstein, assistant athletic director for sports information at NYU. “The powers that be thought baseball should live at NYU, our conference has baseball, so why shouldn’t NYU.”

The man in charge of leading the revitalized ball club is Doug Kimbler. Kimbler played professionally at the minor league level for both the Detroit Tigers and Chicago Cubs organizations, and has been coaching at the collegiate level since 2001. For the past two seasons Kimbler was the coach of the NYU-Poly baseball team, but his position with the now extinct ball club did not make him a lock as NYU’s next manager. The Violets skipper was even asked by NYU’s athletic department two years ago to begin recruiting for the 2015 season, without knowing if he would be able to coach the young athletes he sought. 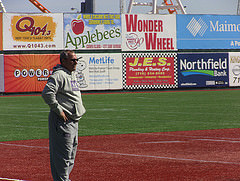 “I went out, started recruiting, ended up getting 28 freshman, and after all that I still didn’t have the job,” said Kimbler, a resident of Albany, NY. “Then in February of 2014 I interviewed, with I’m sure a few other people, and then they offered me the job and I took the position, and the kids I recruited are now mine.”

On top of being able to coach his recruits, Kimbler has also been able to continue coaching a few players that were part of his Poly team. Although, just as Kimbler had to earn his position as the team’s manager, the three players from Poly’s old squad now on the NYU club were forced to do the same as well.

“They made the team on their own merits, I didn’t keep them just to keep them,” said Kimbler, who was a former college baseball star at The College of Saint Rose. “I think what we did is that they filled a piece of this puzzle at this point and they earned it.”

Being in an urban environment with limited facilities to practice, NYU’s coach has been thankful that he has a few upperclassmen to lead one of the youngest teams in college baseball. The team recently returned from Sanford, FL, where they played in the University Athletic Association championship, the team’s conference tournament. The Violets went 2-6 in their first go around of UAA play, a considerably strong showing considering their youth, and Kimbler credited their early success to his team’s attitude when they prepared in New York.

“They all went about their business in a way that they needed to, we were inside, they took batting practice, we got ready,” said Kimbler. “We’re trying to get them to not make excuses for themselves because they are young, when you get on the field it’s still baseball, the first one to 27 outs is usually the winner.” 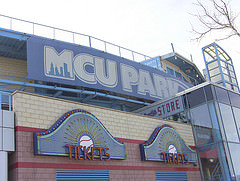 MCU Park in Coney Island. The home of the Brooklyn Cyclones and now the NYU Violets (Photo Credit: Ben Shapiro

While playing a warm weather sport as a New York team clearly presents its challenges (cold weather, lack of fields, etc.) the players and coaching staff are excited to represent the city’s and the university’s historic sports legacy. NYU competed in baseball at the Division I level beginning in 1928, and reached two College World Series. The Violets produced some major league talent along the way, including New York born Ralph Branca. Nicknamed “Hawk,” Branca pitched for NYU in 1943, and then broke in with the Brooklyn Dodgers the following year. On top of his statistical success at the big league level, the right-hander was famous for being on the team that integrated Jackie Robinson into Major League Baseball, and for delivering the pitch to Bobby Thompson that resulted in “The Shot Heard Round The World.”

Branca was one of 12 players that donned the white and violet to make it to the big leagues. Although, more famous former New York athletes have the current players excited to play in the Big Apple.

“You go through the names that played in the city, Babe Ruth, Lou Gehrig, Mickey Mantle, Tom Seaver, Willie Mays, the list goes on and on,” said Marshall Kramsky, one of 23 freshman on the team. “Just to possibly be in the same conversation of playing in the same city as all those greats that I have looked up to my entire life is just an honor and an unbelievable experience.”

Kramsky and his teammates have the luxury of playing at MCU Park, the home of the Brooklyn Cyclones, a Mets minor league affiliate. The stadium is located in Cony Island, and along with being considered one of the top minor league ballparks in the country; it will now certainly be one of the premiere collegiate stadiums as well. Despite reemerging at the Division III level, the team’s new digs along with its extended absence from college athletics has created an early season buzz around New York’s newest ball club.

“For this team to come back I think it has meant a lot to this area,” said assistant coach Aaron Walsh. “We see guys on the street all the time asking us when do you start, when do you start playing. I mean we were in Florida and there were four or five people that came up to us and told us hey, congratulations, we’re glad you guys are playing in Brooklyn, and those were Florida residents.”