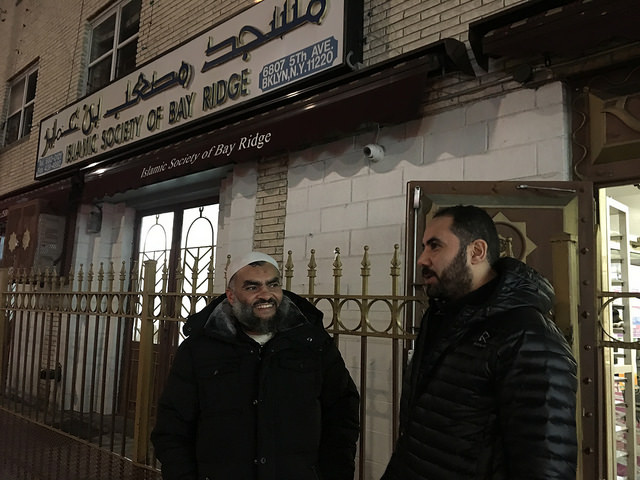 Bahaa Ellaithy (Left) and his friend Ashraf Gad after their prayers in Bay Ridge, Brooklyn. Photo by ANG LI.

In the southwest corner of Brooklyn lies one of the most diverse city neighborhoods, Bay Ridge. A traditionally Irish and Italian neighborhood, it has witnessed an inflow of large numbers of new residents from Mexico, the Middle East and Asia. Yesterday neighbors were outraged over Trump’s latest executive order temporarily banning travelers from seven mostly Muslims countries and permanently barring refugees from Syria.

Muslims from Bay Ridge participated in recent protests against the ban and are still in shock that Donald Trump was elected president.

“This guy…I don’t know how he won,” said Bahaa Ellaithy, 46, an Egyptian Muslim who teaches math in an Islam private high school. “Until this moment, I couldn’t believe that he became the president of a country like America.”

He strongly objected to the ban saying that it’s unconstitutional and against the values that the country was based on. Ellaithy joined the protest at Battery Park Sunday and had protested in front of Trump Tower ten times.

The nationwide protests give Ellaithy comfort and hope.

“I met a lot of wonderful people in the protests who really believe in freedom, believe in dignity, and believe in that people could live together from all races, religions and ethnicities,” Ellaithy said. “It makes me feel that I’m welcomed and accepted in this country.”

Ashraf Gad, 45, also an Egyptian Muslim, thought that the unprecedented ban was dangerous for all Muslims. He did not understand why those seven countries (Iran, Iraq, Syria, Libya, Sudan, Somalia, and Yemen) were targeted. He assumed that the selection was due to Trump’s personal views or business interest.

Gad, a pediatrician, wasn’t able to join the rallies because of his busy schedule at the hospital. But he would make some time for upcoming protests regarding this issue.

Paul Khoury, 62, a Lebanese salesman, came to the US at the age of 17 and has been living in the neighborhood for about 30 years. Back from a 10-day vacation in Spain last night, he was surprised to see the large number of people protesting at the airport. Khoury was worried about the direction where the nation was going and his children’s opportunities as policies became less friendly towards immigrants.

“My life is almost at the edge of it,” Khoury said. “I fear for my kids, not for me. They need a peaceful world than this world to live in.”

Bay Ridge residents from other ethnicities also expressed their anger towards the “Muslim Ban.”

Sally McMahon, 63, an Irish American, said for a country of immigrants looking for a better life, she found the whole ban ridiculous. She felt proud to be active in the protests including the Women’s March on NYC.

“I think that the nation is going a terrible way,” McMahon said. “I think the nation will go in a way of fascism and authoritarianism. And I’m very afraid for myself, for the people, for the country and for the world.”

Diana Balcazar, a 43-year-old Mexican mother of three children is concerned about Trump’s next move. She was afraid that she might be forced to go back to Mexico.

“Honestly, this is my country,” Balcazar said. “I’ve almost been here for 30 years. My whole life is here now.”