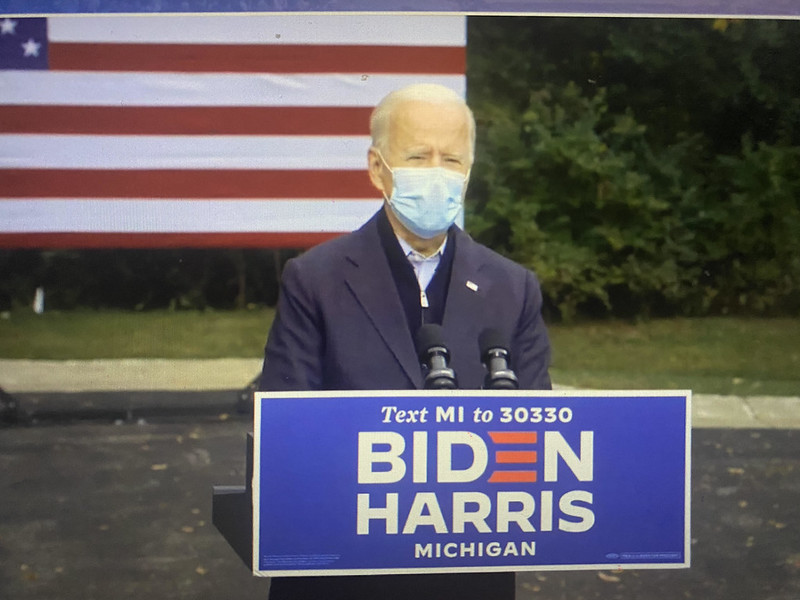 A masked Joe Biden held an outdoor rally in the parking lot of the UFCW Local 91 in Grand Rapids, Michigan, yesterday  to address essential workers amid reports of President Donald Trump’s hospitalization with COVID-19.

The rally’s attendance was limited to members of the press, a few essential workers and a COVID-19 survivor.

That Biden is delivering his entire speech in Grand Rapids with a mask on speaks volumes more than any remarks he’s delivering, and he knows it.

Matt Hoffman, a grocery worker and resident of Imlay City, Michigan stood at the  podium  and urged people to vote Biden for a better America regardless of their political party. He also spoke about the impact of the pandemic on essential workers.

“I live in a small town and our community has been devastated by COVID-19 and the damage it has done to our economy,” he said.“Over these many months, there is not a day that goes by where workers like me are not putting our lives on the line.”

Across Michigan, essential workers have been at the forefront of the pandemic with very few receiving hazard pay.

Biden’s trip to Grand Rapids, was his second visit to the state in less than a month. Before he commenced his  20 minute speech, he confirmed that he had been tested twice for COVID-19, and received negative results on both occasions. He also sent well wishes to Trump and his wife, First Lady Melania Trump, who had recently tested positive for the virus.

“I hope that all of those fighting the virus, including the first family, rapidly recover,” said Biden.

The rally  comes on the heels of his abrasive debate session with the President. Biden, who tested negative, urged Americans to be patriotic and wear masks.

“It’s not about being a tough guy,” he said.

Biden said that the President’s diagnosis showed the importance of taking the virus more seriously.

Trump, who tested positive for the coronavirus after months of downplaying its danger, aroused confusion in the political world and fears among his aides that his diagnosis would backfire among voters and result in a political disaster, further dampening his chances of winning.

Biden sounding like a President-in-waiting at Grand Rapids. Not since Zorro has anyone drawn so much power from wearing a mask.

Biden currently leads Trump in the Michigan polls by 6.7 points as of today.

The primary goal of his rally was to discuss his “Build Back Better” economic plan, and his target audience was the middle class as well as essential workers who were on the frontlines of the workforce during the pandemic. Acknowledging the turbulence of the current times, Biden urged all Americans to unite.

“This cannot be a partisan moment. It must be an American moment. We have to come together as a nation,” said Biden. “Let’s get the heck up, and remember who in God’s name we are. This is the United States of America. There is nothing beyond our capacity.”

The rally was held in Kent County which is a suburban area  and a former republican stronghold that is turning democratic because of its increasingly growing and diverse population.

During his rally, Biden touched on familiar themes of   taxes, job creation, medicare, social security, child care and the economy. He also referenced the recently released job report, acknowledging that the jobs  created were insufficient.

“I do understand that this is a scary time, an uncertain time. I understand and I see you because I see the world from Scranton Pennsylvania where I grew up. A lot like Grand Rapids,” said Biden.

Biden addressed essential workers again and promised them an increase in their wages if he won the presidency.

“For essential workers, we are not just going to praise you, we are going to pay you,” said Biden to the audience of frontline workers.

Hamadi Baccar, a democrat  and Michigan resident  said that Biden would make good on his promise by creating jobs through his economic plan.

“Increasing the pay to $15/hr will go a long way for people to lead better lives,” said Baccar.