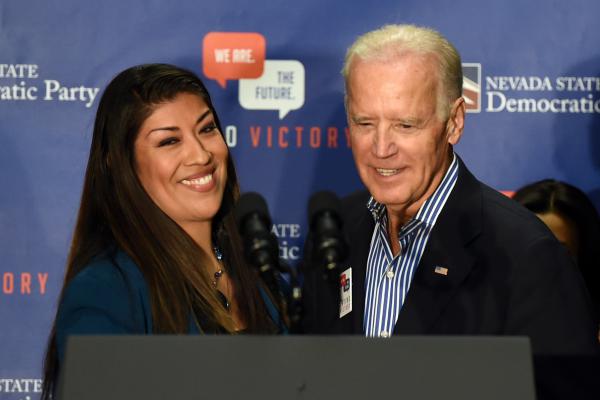 “I don’t think anyone in our generation is pumped up about a Joe Biden prospect,” said Sarah Zimmerman, 25. “And I kind of think that our generation is going to be pushing this entire election, so that’s kind of what matters.”

On March 29th, former Nevada politician Lucy Flores wrote a post for The Cut outlining an uncomfortable encounter she had with then Vice President Joe Biden in 2014. In the article she describes him putting his hands on her shoulders, leaning in and breathing deeply into her hair. Since then, more photos and experiences from other women have come to the forefront of the news.

For these millennials, Biden’s affectionate ways sparks a larger conversation about boundaries and sexual harassment.

“I’m actually really glad that people are starting to talk about it, because pretty much, last year, or awhile ago, I saw a compilation of how he always did weird stuff like that, but no one really talked about it,” said Monmouth University student Nick Coscarelli.

Flores was clear in her initial post that she did not feel assaulted, but the intrusion on her personal space had felt professionally disrespectful and inappropriate.

“She had not read it in a sexual way, but it still was very clearly ‘gendered creepiness,’ that violated her personal boundaries,” said Meredith Bradfield, a graduate student at Simmons University.

While Flores and other women have been clear, the public reaction and dialogue surrounding the initial post followed a familiar paradigm.

“I don’t like the way that it’s formulated,” said Zimmerman. “Because of #MeToo and because of the pattern we’ve created, we’ve kind of set it up so that women have to come out with ‘accusations’ and then other women have to follow. But it’s just kind of strange in this case because we all know that Joe Biden does that, we can literally see hundreds of videos of him doing exactly what she says.”

Flores’ experience triggered an onslaught of harsh criticism of the former Vice President, as people dug into videos and images of his over 40 years of public life. But, a more nuanced conversation about personal limits has grown from the knee-jerk reaction that initially concerned publicist Samantha Simon.

“A part of me, because I work in entertainment, a part of me was so nervous that this would go the route of Aziz Ansari,” Simon said. “Where he did something really inappropriate, but in the grand scheme of things, I don’t know if it was as inappropriate as what other people have done, for example Harvey Weinstein, and he just got ridiculed in a way that I think was kind of unfair.”

Biden, the front runner in the Democratic Primary, despite not having he is running president, responded with a written statement last Sunday and followed up with a video released on Twitter.

Social norms are changing. I understand that, and I’ve heard what these women are saying. Politics to me has always been about making connections, but I will be more mindful about respecting personal space in the future. That’s my responsibility and I will meet it. pic.twitter.com/Ya2mf5ODts

Coscarelli and others, including #MeToo founder Taran Burke, said Biden misunderstood the criticism and is squandering an opportunity to listen and learn.

“I think he is very out of touch with where we are moving and he’s also just very insensitive to what he thinks is the problem,” Coscarelli said. “I guess he’s taking it as, I guess, all of a sudden people have changed what is okay and what is not. But that’s not the case. We have always known where the boundaries should be drawn, but people have always overstepped them and there has been no consequence to it.”

At the International Brotherhood of Electrical Workers conference last Friday, Biden joked about the controversy. Multiple times during the event he flippantly remarked that he had “permission” to touch those he was hugging. Despite also apologizing to the assembled crowd, even some older Democrats, were underwhelmed by his handling of the situation.

“I think that he should have owned up to it and apologized right away,” said D’Anne Avotins, who is a parent of a young millennial. “He was silent for too long and then he made that joke on stage the other day, which I don’t think was considerate to the people who came forward.”

Coscarelli doesn’t feel Biden understands that his actions were wrong.

Many feel that this is another example of Biden being dismissive of a woman’s experience.

“It’s also all hanging under a lot of other things like the Anita Hill hearings, that he just really needs to answer for,” said Zimmerman. “It’s just like one of many things.”

“I am personally very nervous about the fact that he’s been leading in the polls, in part because of something I think people haven’t really been talking about enough,” said Bradfield. “The fact that during the Anita Hill trial, with the nomination of Clarence Thomas to the Supreme Court, I seem to remember Biden had not been supportive of Anita Hill at that time. Just kind of thinking about that, in conversation with the lack of respect around boundaries– it might not be at a Kavanaugh level, but it’s still icky.”

With so many questions to answer, without having even announced an exploratory committee, some are looking to other options in the democratic primary.

“There are so many other people on the democratic ticket that come from diverse backgrounds– that are women and that are people of color– and I am just having a hard time being excited about another old white guy on the ticket,” Bradfield said.

While Biden’s conduct has been deemed by many to be distasteful and enthusiasm is not on his side, it doesn’t necessarily mean he cannot run for president. Avotins thinks he could easily backtrack and apologize in a more sensitive way.

If Biden does decide to run for president, he would be squaring up against Trump, who has a long history of sexual harassment allegations.

“You know what’s weird is that we have a president now who obviously said some incredibly inappropriate things right before he got elected, so in my mind maybe it’s not as big of a deal,” Simon said. “That being said, he’s catering to an audience that values things differently. So it sort of seems like it is going to be a way bigger road block than it ever would have been for Trump.”