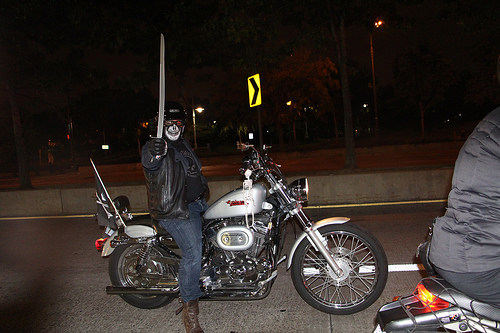 The 21st century biker-pirate, Juan Camacho, on the West Side Highway. Photo by Maria Panskaya

The 21st century biker-pirate, Juan Camacho, on the West Side Highway. Photo by Maria Panskaya

Members of Biker Entourage gathered together for the third time on Friday night to celebrate the international “Talk Like a Pirate” day and to ride the streets of Manhattan in honor of Captain William Kidd, New York City’s most famous pirate.

The annual parade, or Pirate Ride, stated in downtown and went though all piratey landmarks across the city.

“This ride is not about egos and not about showing off,” said Deme Spy, 48, the founder of Biker Entourage.” “It’s about positive experience and having fun.”

Eye patches, plastic swords, loose fitting flowing pirate shirts and, most important, motorcycles, were all that was needed to participate in the ride. And the desire for the great adventure was welcomed too.

The bike ride started on the West Side Highway, with Spy leading the group under the Jolly Roger Pirate Flag. Back in the days, when New York was New Amsterdam, pirates used to sail the waters alongside the highway; and now the 21st century biker-pirates carried on the time-honored legacy, cruising the roads on the roaring boats.

“Had two-wheeled dragons been invented 300 years ago,” said Spy. “Pirates would be roaring through the streets with them between their legs as sure as a shark loves a chum bucket.”

The Pirate Ride continued on Times Square, where bikers’ sudden appearance triggered all kinds of responses—from friendly similes and laughter to utter confusion.

The next piratey destination was Trinity Church, to which Captain Kidd believed to be a benefactor. Spy passionately narrated the tale for those, who participated in the ride for the first time, attracting curios passersby to stop and listen at the same time.

“I love bikes myself and I think I’ll get involved,” said Sherif Sadek, 18. “Looks like what these guys do is different from anything else I’ve seen before in my life. These are not your typical bikers.”

Breaking stereotypes is one of the group’s goals, while simultaneously educating people about biker’s culture, showing that riding a bike can be a positive experience, and that it is all about one’s inner strength and freedom. Spy, like other participants, holds a full-time job and a professional in his field. Levi, for example, is a photographer in regular life and Juan Camacho is an IT expert.

“At the end of the day it’s all about embracing freedom of a motorcycle,” said Camacho. “We want people to know that we are not all Sons of Anarchy type bikers.”

Spy, as a leader of Biker Entourage puts a substantial emphasis on safety. Before bikers leave for a ride, he goes over some of the ground rules like no heavy drinking before getting on bike, no speeding, stay and alert and fully conscious on the road, and don’t be aggressive—respect comes first.

Only after safely sailing the city, playing various pirate games and having a sword fight, with Ducatis, Harley Davidsons and Hondas neatly parked, biker-pirates rest at a bar with a glass of beer or scotch, sharing their after-ride experiences.