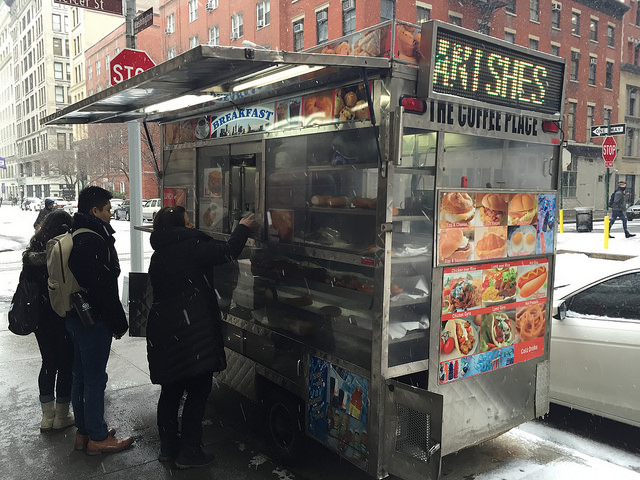 Kale Alfageh keeps The Coffee Place food truck open to serve some of his regulars as they brave Winter Storm Juno and grab a late lunch. Photo Credit: Raz Robinson

Monday afternoon, when most have been urged to stay indoors, some of Lower Manhattan’s food truck operators are braving Winter Storm Juno and going to work anyway.

Kale Alfageh cupped his hands together, pressed them firmly against his lips, breathed deeply and muttered, “I hate this, I hate the snow.”

Alfageh, 48, has been operating The Coffee Place breakfast food truck on the corner of Mercer and Washington Street for six months now. He noted his distrust of weather reporting as his primary reason for setting up shop.

“Cause you know sometimes they say it’s going to be something and it ends up being something else,” said Alfageh. “ Last year they said there was going to be too much snow to go out and I didn’t work. The weather was actually really nice that day and I lost a lot of money. This happened three or four times so now I always go.”

Mia Alumghed, 50, who works out of the Halal food truck on the corner of Astor Place and Broadway, expressed a tone similar to Alfageh’s.

“Business on days like this is always terrible,” says Alumghed. “But it’s not really worth not going.”

“I’ve seen it all,” said Alumghed, who has worked out of his truck for five years now. “The weather has been worse, but the regulars still come.”

Despite the steady flow of steam rolling out the window of his truck the storm had Alfageh pining for the warmth of his home country. “I’m from Egypt and it never, never, never snows in Egypt,” he said. “Egypt has the best weather in all the world”.

Although Alfageh was thinking of Egypt, some of his regulars were thrilled to see him coming out to open up shop despite the bad weather.

“I really am thankful,” says Jessica Thomas of Queens. “The guys are always so nice and friendly no matter what the weather is. Whether it’s raining, or snowing, or a hundred degrees outside”.

Thomas, who works as an administrator in New York University’s psychology department, was happy that as everyone was heading inside there was still somewhere to grab a snack.

“They’re so close to the office,” she said as she pointed to the building she works in. “and I almost never see them packing it up.”

As the wind picked up, the snow began to stick to the ground. Alfageh looked out the window of his truck and said, “I plan to leave at 5, but we’ll have to see how the weather looks before I go anywhere.”