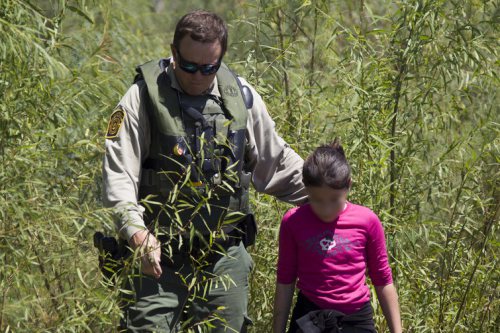 Thirteen-year-old Dana ran away from Guatemalan home to the Unites States because she was afraid for her life. The gang she used to be a part of killed her stepmother because she did not want to be a member anymore. Running was the only way she felt she could survive.

Dana’s story was told by Jennifer Friedman, the director of PACE Public Interest Law Center, at a public hearing on migrant youth yesterday. Dana is one of 57,000 migrant Central American youths, who have fled from their home country because of violence and extreme poverty this year. But many also come to the U.S. in search of their parents or other relatives who have immigrated to this country, most of these adults are undocumented.

Once these children are here, it is rarely a happy ending. This year, 90,000 youth will be detained and face deportation proceedings. Without an understanding of the law system in the U.S., they blindly put their fate into the hand of judges.

“Two third of these children are eligible to have remedy under the U.S. law,” said Monsignor Kevin Sullivan, Executive Director of Catholic Charities of the Diocese of New York during his testimony. “However, they do not know about it because they don’t know about their rights, they don’t get good information.”

Monsignor Sullivan along with four other witnesses spoke at the public hearing held by the Assembly Standing Committee on the Children and Families Task Force on New Americas yesterday, at The New York State Assembly Hearing Room in Lower Manhattan. The hearing’s goal was to determine what the states can do to better serve these migrant youth and the residents of New York. 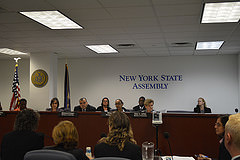 Jeremy Kohomban, president and CEO of The Children’s Village pointed to the importance of providing legal services to assist migrant children.

“We should find a pragmatic solution for the problem,” he said. “If we don’t, they will go to any land, making a border crisis.”

Nisha Argarwal, the commissioner from the Mayor’s Office of Immigrant Affairs, argued that the city had provided the service needed for these children. Recently, the city placed a representative at the immigration court to serve and provide information for them. The city also has ensured the children’s rights for education and health care.

“Rather than coming up with new programs, we need to optimize the ones that have already been created, “she said.

New York State is not the only one to face the proliferation of youth migrant, who are coming mostly from Mexico, Guatemala, Honduras, and El Salvador. California and Maryland are among the first states to create standards in dealing with these childrens. While immigration and deportation proceedings are federal issues, many migrant children, as young as 18-months- old to 17-yearsold, must go before Family Court or become wards of the states.

Friedman, tallked about the legal issues that the migrant children of Hudson Valley, Westchester face.
“In defending them, it is impossible to use private practice because of the excessive fee. Even pro bono still needs money,” she said. “So, although many migrant children are eligible for remedy, it’s difficult and complicated.”

But Monsignor Sullivan is convinced that the community can help migrant children.

“Although we cannot change the immigration law, we can give a future to the children of the migrant,” he said. “If we invest in these children’s future, we invest in New York’s future.”