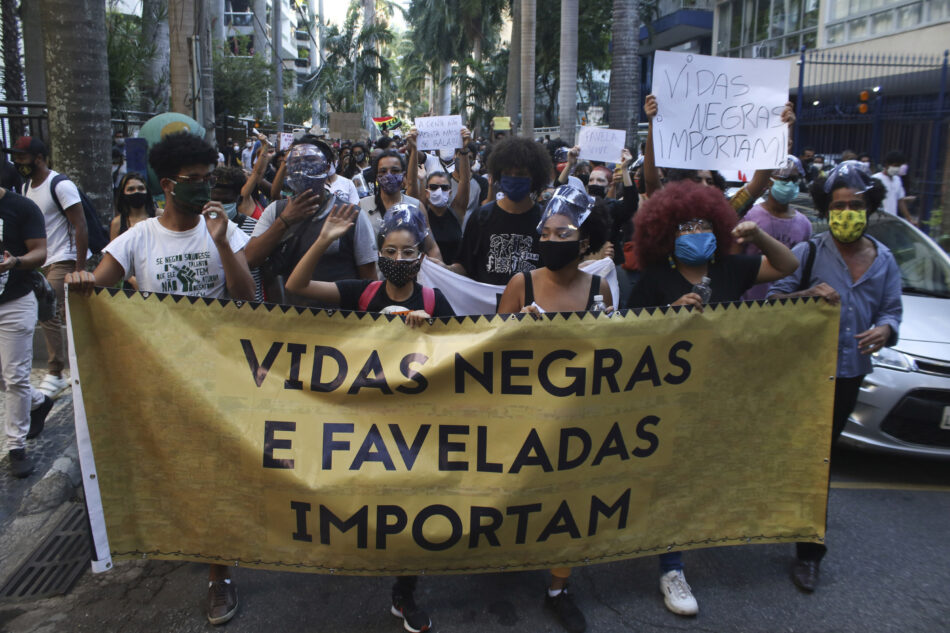 Protesters march ‘ in front of the Guanabara Palace, official residence of the State Governor, in the city of Rio de Janeiro in May. The protests were in response to the deaths of young blacks during police operations on the outskirts of the city. Photo: Dikran Junior / AGIF (via AP)

Brazil, which has been longed  been plagued by racism has seen a new dialogue emerge through social media and protests after the police murder of George Floyd  and the worldwide protests against racism.

Ernesto Xavier, a Black actor, anthropologist and editor in chief of GQ Magazine in Brazil often posts in social media about race. His posts are getting more hits than ever.

“The difference is remarkable,” he said. “Because of the Black Lives Matters protests in Brazil, I gained 2,000 followers from one day to another. People seem to have woken up.”

The legacy of racism in Brazil has been brutal.

The country’s population is  of 55.8 percent black and “pardo” (brown skinned) people. According to official numbers of a Brazil’s human rights report hotline, 615 complaints related to racism were registered in 2018.  Racism is considered illegal in the Brazilian constitution,  but the evidence of rampant racism in the country are overwhelming.

“It is important to follow the news to know if we are being discriminated against,” said journalist, Silvandira Costa. “We must know our rights so that we can pursue justice and a better future, consequently. It’s sad that this movement is only happening now after the death of George Floyd, but it’s better to happen now than not to happen at all. We can’t breathe.”

Brazil enslaved more than four million Africans.   That’s ten times more than the number of slaves brought to the U.S. and raced based inequalities are deeply felt by its Black citizens.

Black people were seen as possession because of slavery,” Xavier said. “There were several public policies to eliminate us [Blacks] and to whiten the population, like when Portugal brought Europeans and gave them land in Brazil to populate the country. White people were the ones who created the term “negro.”

The same issues that plague African American can be found in this majority Black country, ruled by a white president. Blacks make up 64 percent of the prison population, earn 57 percent less than whites and suffer from police brutality. Access to education, jobs, and income inequality also mirror the problems African Americans face in the U.S.

“Just a few years ago, when I went into stores, shop assistants used to follow me every time, afraid that I would steal something because I’m black,” said Silvandira Costa, a retired  housemaid. “I have also suffered several types of discriminations because of my skin color in several other situations in Brazil.”

Dr. Luiz Herculano, a Portuguese professor at the Federal University in Santa Catarina, has also experienced racism. While traveling on behalf of the congress to Columbia, he was met with scrutiny at the airport.

“She triple checked my passport and all of my documentation when I was checking in,” he said. “She was not used to seeing a Black man travelling on business class, so she was suspicious.”

And because of poor health care, people are contracting and dying of COVID-19 in far greater numbers than whites. Brazil is quickly emerging as the next epicenter of the virus and expected to surpass the U.S.

“Racism is a system of oppression that kills, discriminates and maintains white privilege,” said journalist, Sayonara Oliveira. “It prevents Black people from having a job, opportunities, a place at a university or even be morally or physically abused.”

Xavier said the fight against racism is everyone’s fight.

“People don’t realize that racism impacts all social relations in society,” he said.  “If a country has a significant level of poverty, or criminality, or low levels of education, it affects everyone. To recognize white privilege is a question of humanity and civility.”

Brazil’s black citizens have long suffered from systematic racism  which  means racism is essentially everywhere in their lives, from lack of representation in big corporations, universities, housing and in every aspect of Black life. Racist jokes are also a common practice in Brazil.

“We are often referred to in racist jokes so that we won’t reach the top,” Herculano said. “You inferiorize in order to maintain a white domination and privilege.”

He said in Brazil, the deaths of Black people and children, such as Agatha and João Pedro have shown that black people are often not treated as citizens in the country.

But Oliveira, is  hopeful that because of the attention on racism now, will mean a better future.

“I’m seeing a lot of white people who never showed any interest in racism asking me about it,” she said. “Friends are asking me for book recommendations , my opinions on certain matters. I’m optimistic that the future holds a better situation for Black people in Brazil.”