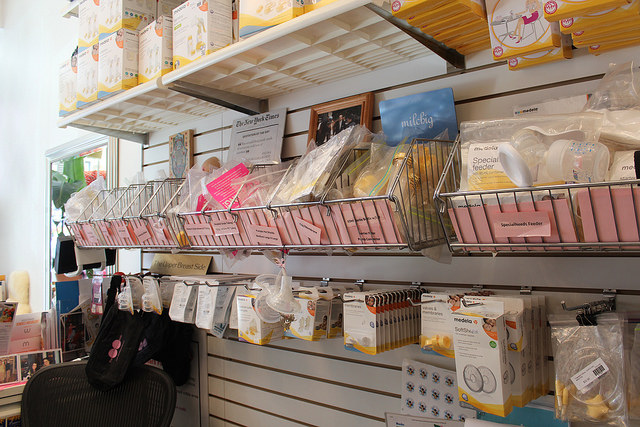 Breast feeding accessories are for sale at the Upper Breast Side, a store for new moms that is located on the Upper West Side. Photo by Elizabeth Arakelian

The new hot seller on the Internet marketplace is breast milk.

Advertisements regularly pop up on Craigslist and the website OnlytheBreast.com where anonymous moms sell their milk to the highest bidder, often proving the quality of their milk by describing their eating and exercise habits. Some even post photos of their babies as proof.

“Hi! I am a first-time mom to a handsome and healthy 4-month old boy,” wrote one Jackson Heights, Queens mom on recent Craigslist posting “I am drug-free, a non-smoker and still taking my prenatal vitamins. I eat a well-balanced diet and regularly go to the gym to maintain a healthy lifestyle. I am willing to sell my liquid gold to anyone.”

The mom is selling her breast milk for “$2 per ounce. Cash only.” and it’s a convenient way for overproducing moms to make money. But, it’s can be dangerous for the buyer according to the Food and Drug Administration (FDA) which publicized warnings on its website against purchasing milk online.

“When human milk is obtained directly from individuals or through the internet, the donor is unlikely to have been adequately screened for infection disease of contamination risk,” the FDA writes.

If you’re going to buy milk, purchase it from a milk bank the FDA states, which New Yorkers will soon be able to due with the state’s first milk bank slated to open on Mother’s Day.

The New York Milk Bank is accredited by the Human Milk Bank of North America and is licensed by the New York State Department of Health. There are 21 milk banks in the United States and their function namely is to supply hospitals with breast milk for premature infants. But, mothers can buy milk directly from the milk bank with a prescription from their doctor.

“Mothers who give birth prematurely tend not to have enough milk so this can be a good option for them,” said Julie Bouchet-Horwitz, nurse practitioner and executive director for New York Milk Bank.

But, not all people seeking breast milk have just given birth. Others include parents of adopted children and cancer patients, as the milk has thought to have a necrotizing effect.

The breast milk that fuels the New York Milk Bank is donated by local mothers and the bank has established nine milk depot locations, or drop off sites, where screened mothers can bring their milk. The depots are operated by individuals in the industry, like physicians’ offices and a breastfeeding supply store, who then store the milk in a freezer before shipping it to the milk bank in Ardsley-on-Hudson. But, before mothers can donate their milk they’re first screened. Donating moms also need a letter from their physician and their baby’s doctor. Once approved, the donating moms are tested and prenatal records are examined to ensure the milk is safe.

“Then we accept her as a donor and we ask for a minimum of 150 ounces, but many women do much more than that,” said Bouchet-Horwitz.

The price for breast milk from the New York Milk Bank can be triple the price per ounce of what is offered online, but with the hefty price tag comes peace of mind said Bouchet-Horwitz.

“We know our milk is safe and that’s why we charge $4.50 an ounce,” said Bouchet-Horwitz, noting that the price covers testing the donors, staff, and equipment needs.

The milk bank’s success is dependent upon new mothers, like Katie McDermott, who are willing to donate their excess breast milk to help another family out.

“If you are unable to [breastfeed] and if somebody was able to give that gift, I think it’s just wonderful to know that another mummy out there is thinking ‘I want to keep your baby as safe as my baby,” said McDermott.

Dr. Perri Klass on the importance of breast feeding