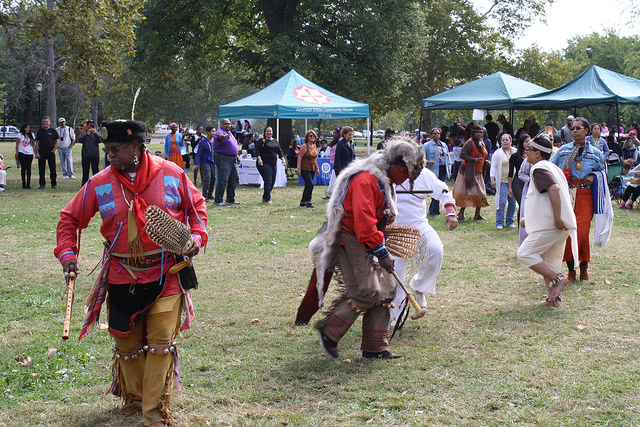 A dance at the Native American Festival in the Bronx. Photo by Wyatt Salsbury

The sounds of beating drums, rhythmic chants, and joyous people brought gatherers, near and far, to the Pelham Bay Park in the Bronx Sunday afternoon to celebrate a proud culture.

The Native American Festival, or yearly pow wow attracted hundreds of diverse people to celebrate native culture. They danced traditional Native American dances, ate Native foods, like fry bread, and listened to stories and admired the dreamcatchers that were sprinkled throughout the event.

“This is a unique opportunity for non-natives to interact one-on-one with native people,” said organizer and master of ceremonies, Bobby Gonzalez, 64, of Melrose, Bronx. “And, it’s a way of dispelling commonly held stereotypes about native people.”

There are 567 recognized Native American tribes in the United States, but the diversity within the culture is not often celebrated.

“We’re lawyers, doctors, nurses, teachers,  we’re not all casino Indians,” said Kevin Tarrant, 46, who identified as part Hopi and part HoChunk, which are indigenous tribes from Arizona and Wisconsin. “We all look different. You could be riding the subway everyday next to an Indian, and you wouldn’t even know it.”

Tarrant said that the goal for the festival was to bring knowledge and exposure to native culture in the Bronx, which has roughly 41,706 people that identify as American Indian or Alaska Native alone. That is 2.9% of the estimated 1,438,159 people living in the Bronx.

Tarrant, the head singer for the Silver Cloud Singers and the Executive Director of the American Indian Community House based in New York, played a pow wow drum during the festival.

The drum used was made of Buffalo Hide in Washington state. The pow wow drum, like other aspects of indigenous culture, is intended to bring people together. Its design allows multiple people to play it at once, and it is used for a lot of the music at pow wows.

Toni Ceaser, 61, of Long Island City, Queens, participated in a women’s traditional dance – a very slow dance in Native American culture. While not Native American herself, Ceaser’s husband is and she has been immersed in his culture for over 40 years and participating in similar festivals for over 20 years.

“It’s really important for people to share culture with one another, because everybody’s got their own culture, and if we can share and appreciate each other’s culture, then I think it brings people closer together,” said Ceaser. 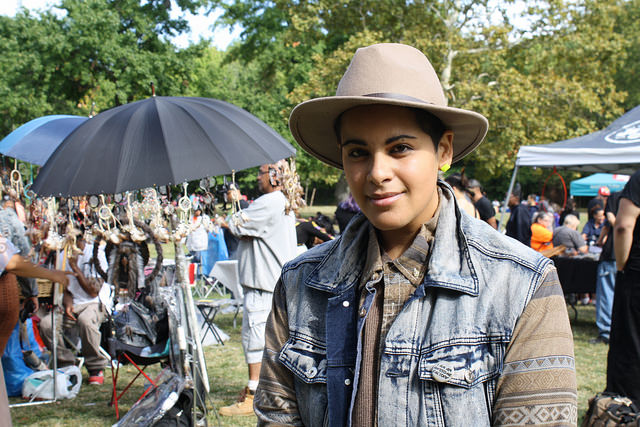 Skye Cabrera, 26, stands in front of a collection of dream catchers at the festival. Photo by Wyatt Salsbury

“If you look at our history – Dominicans, Taino culture – we stem from that, especially being American,” said Cabrera. “There’s a lot of Native American history in New York in general.”

According to Path Through History NY – “Native Americans” there were multiple New York tribes that occupied the state many centuries ago. The largest was the Iroquis tribe, who the European settlers first met when they arrived 400 years ago.

Ceaser said being able to connect to the past is an important part of the festival.

“In New York City, it’s become so modern, that it’s really important to be able to connect with the old ways,” she said.