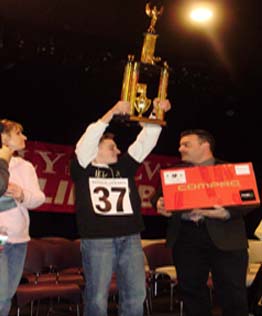 With the soundtrack of Rocky V ringing in his ears, Thomas Harkins became the hero of New York City’s Hunter College High School yesterday.  Confident, charismatic, and characteristically tow-headed, he wore the part well, posing for the flashing cameras while brandishing his heavy trophy in the air.

Though Harkins is a high school champ, he is not a high school student. Harkins, 13, is the winner of the New York City 45th Annual Spelling Bee.

“It feels awesome; I can’t describe it,” said a beaming Harkins shortly after correctly spelling the word “philippic” to take first place in today’s competition.  Harkins is an 8th grader at Dyker Heights Intermediate School 201 in Brooklyn. He was one of 44 finalists contending for a chance to participate in the Scripps National Spelling Bee held in Washington, D.C. in May.  Tuesday’s winner will also earn this right, along with other prizes such as a laptop and theatre tickets.

Harkin’s formula for success was easy.  “I studied a lot of words, and I listened to the songs of Rocky V,” said Harkins.  Pumping his fists in the air to express his excitement, he chewed gum as he spoke.  “I really paid attention to the lyrics of “Go for It.  And look where it got me? The Big D.C.!”

The idea of passing your free time memorizing Latin roots and making vocabulary flash cards in bulk may not appeal to most middle school students, but for a privileged few, spelling bee competitions form an early milestone in their academic career.

It certainly is in Harkin’s case.   His mother, Linda, insisted that her son’s desire to win the regional bee was fueled by his own appetite.

“He reads all the time,” she said.  “He was spelling words with magnets while sitting in his high chair.”

Harkins said that his friends, who applauded thunderously every time he approached the microphone, were really pulling for him to win.  They did not mock his choice for taking the bee seriously even if they didn’t.

The benefit of spelling bee competitions, according to Ted Solow, a retired high school principal who has been a judge at the N.Y.C Bee for the past seven years, is that it distinguishes a subset of bookworm adolescents who would not otherwise have a chance to enjoy the limelight.

“Kids get to be recognized for a talent they have the same as any athlete would be recognized,” Solow said.  “They are the best and the brightest of the city.”

Parents Kevin and Laura Dumbach, whose son Thomas finished third in the spelling contest, shared this opinion as well.

“It gives kids confidence,” Laura Dumbach commented.  “They get to form new friendships,” adding that there is a lot of bonding going on at these tournaments.

There is often a lot of ill-will too, from parents who doubt the integrity of the judges or the speaker’s pronunciation of a word.   Audience members contested a judge’s ruling twice this morning, but this is expected, according to Solow.

Solow was pleased that this year’s competition ran so smoothly—and so quickly.

“Two years ago, we were still here three hours in,” he recalled.  “Neither kid could lose.”

After a brief 55 minutes this year, however, there was only one clear winner.