Brooklyn protesters say no to gentrification 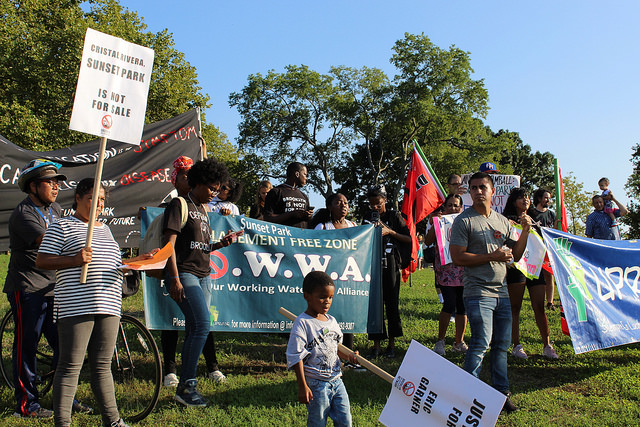 A coalition of grassroots organizations and protesters gather at the end of their Brooklyn march against gentrification, ICE and policy brutality. The march ended in Sunset Park. Photo by Caroline Aguirre.

Protesters marched from Flatbush to Sunset Park yesterday to denounce gentrification and the rising cost of living in Brooklyn.

The march was led by Brooklyn Anti-Gentrification Network (BAN), which demands universal rent stabilization in the city. BAN demands the protection of public housing and believes the city is being remade for the wealthy. Most of the marchers were from a variety of grassroots organizations that fight gentrification. They were also protesting ICE and police brutality.

Monica Underwood, who has lived in Boerum Hill for 35 years, is the steering Committee Chair of Families United for Racial & Economic Equality. She said a new neighborhood proposal would take away walkways and playgrounds for youth. Two large parking lots on her residence would be replaced by buildings that could be 16 stories high and unaffordable.

“I don’t want people to be displaced because the neighborhood is changing,” Underwood said.

Brooklyn is changing. According to a gentrification report by the NYU Furman Center, between 2000 and 2010-2014, Williamsburg and Greenpoint experienced a rent growth of 57.7 percent, Bushwick 44.5 percent and Bedford Stuyvesant 39.9 percent. Meanwhile the black and brown population decreased.

Bailey wants the state legislature and state senate to be more active in making sure there are protections for rent stabilized tenants.

He believes that gentrification is altering the core fabric of these neighborhoods. .

“Neighborhoods are losing the flavor they had when I was younger,” he said.  “It was community. It was neighbors looking out for each other, neighbors becoming part of your family.”

As a representative of tenants in housing court and a practitioner of landlord tenant law, Bailey said black and brown women are at a disadvantage.

“I see it wholesale, mainly black and brown women being evicted from their homes,” he said. “When you go outside the (housing) court on 141 Livingston Street, you’re going to see nothing but confusion and people of color. You’ll see about 100 people outside everyday.”

Marcela Mitaynes, a long-time resident of Sunset Park and organizer of Neighbors Helping Neighbors, believes that immigrant communities have specifically been targeted and driven out of their homes.

“The Latino and Asian side are being targeted,” she said. “They have substandard housing conditions and are being overcharged for the units their renting out.”

“I want the tenants to know they are not suffering by themselves,” Mitaynes said. “The harassment is not something they caused. It’s landlord greed that’s pushing this. They need to be educated.”

Mitaynes moved to Sunset Park in 1979. In 2006, her landlord forced half of her neighbors out of the residence. When Mitaynes was subjected to the same fate, she attempted to fight in housing court, but she came to realize the inefficiency of it. Neighbors Helping Neighbors provided her with the support she lacked.

“We will use our voices to tell our stories,” she told the protesters in Spanish through a microphone.

The protesters and grassroots organizations ended their march in Sunset Park.

“Sunset Park no se vende!” they shouted in Spanish.

“Sunset Park is not for sale.”