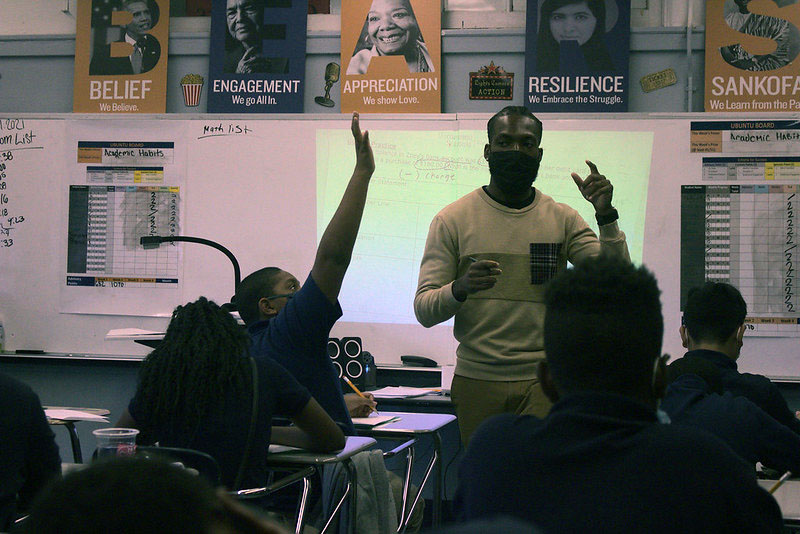 Jeremey Arriola(left), a 7th grader at Brownsville Collegiate, nearly falls out of his seat for a chance to participate in Math class as teacher Deyshawn Clarke poses a question. Photo by Frank Festa

Jeremy Arriola sat near the front of his seventh grade classroom, flanked on all sides by mask-clad classmates scratching at their mathematics packets with pencils. Four weeks into the Fall at Uncommon Schools’ Brownsville Collegiate Charter in Brooklyn, he’s happy to be back in person, learning how he does best.

“When we were on the computer, it was way harder,” said Arriola, who finished his work with ease and took a moment to crack a joke with a friend while waiting for the next portion of class.

Even though the reality of catching Covid scares him, he’s excited to be back with his friends, playing football, being a kid.

“The masks can get kind of annoying and it gets hot sometimes, but nobody wants to catch Covid. We just wanna be here,” said Arriola.

After starting the 2020-2021 school year fully virtual and switching to hybrid in mid January, Deyshawn Clarke, Arriola’s teacher and the mathematics curriculum lead for the school, is conscious of the disparate impact Covid-19 related school closures had on learners like theirs.

“I think trying to play catchup is counterproductive,” said Clarke.

He aims to remediate basic skills while pushing grade level standards, like beginning a lesson on balancing finances with addition and subtraction fundamentals. Popular artists like Drake loop softly in the background of his classroom as students complete their work.

“So far they’re really grasping what we’re doing,” said Clarke. “We have really great kids. A lot are just excited to be out of the house. For some of them this is the first interaction they’ve had with other kids since March of 2020.”

Clarke grew up in the Prospect Lefferts Gardens section of Flatbush and became a teacher with the intention of serving his community. He said  compliance with Covid safety guidelines at Brownsville Collegiate this year is tight. Only one positive case has surfaced thus far – a sign of their diligence.

“I’m having kids wipe down their desks at the beginning, middle and end of the day,” Clarke said.”I’m constantly washing my hands. Talking into the mask all day is a little bit of a challenge, but we’re doing what we have to to stay safe.” 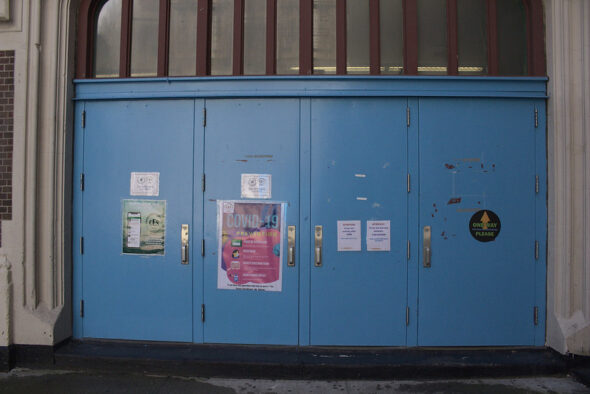 Brownsville Collegiate’s front doors are plastered with Covid-related signs, the first thing students see when they arrive. Similar posters can be found throughout the building. Photo by Frank Festa

Filling out a health pass is a prerequisite to entering the building. Most students remain in one classroom for the majority of the day as cohorts, with teachers traveling to them to minimize contact. Doors remain open. A single student is allowed out of any given room at a time or within a restroom. Sanitation stations, complete with disinfectant wipes and hand sanitizer, are in every classroom and at the end of every hallway. Little reminders like stickers and signs are plastered throughout the building.

“I’m pretty sure I got thousands of emails when we were online,” said Javae Haskins, who’s in Arriola and Clarke’s math class. Though she fared well through virtual learning, she doesn’t miss all of the logistics that came along with it.

Cumulative City data from September 13 through September 22 for confirmed positive cases shows 544 staff and 1,145 student cases for a total of 1,689. When combining district and charter school data on how case counts are disrupting in-person instruction, there’s been 769 complete classroom closures and 571 partial classroom closures, which indicates a cohort from a certain classroom was forced to quarantine. No such situation has yet occurred at Brownsville Collegiate.

“The kids keep all of us happy, and, you know, they’re safe and healthy, and that’s really important,” said Tina Dass, the school’s Director of Operations. She said the pandemic has turned her into their de facto health expert, overseeing much of their safety plan.

Earlier this week, Mayor Bill de Blasio altered school guidelines on testing and quarantining in an effort to target cases early and keep as many students in person as possible. Starting September 27, schools will be expected to begin testing 10% of their students that consent to testing on a weekly basis as opposed to the initial biweekly guidance. And unvaccinated students who have direct exposure to classmates who test positive will no longer need to be quarantined, so long as they were masked.

“Dealing with shutdowns last year was even more stressful,” said Dass, who recalled calling staff on Christmas Eve last year and informing them they needed to quarantine. “Keeping up with everything has taken some of the joy out of this job.”

Guidelines that are subject to perpetual revision raise as many questions as they answer, in particular differing guidance for elementary, middle, and high schools, caveats for lunchtime and recess, and a lack of clarity around how virtual learning should look for those quarantining at home.

New York City’s teachers are also concerned about the reality of the task at hand. The city’s largest teachers union, the United Federation of Teachers, released an internal poll earlier today that found a significant lack of confidence in De Blasio’s safety plan. When it comes to keeping a safe social distance, 92% of teachers also believe that students are unable to abide by the 3-foot guidelines. Some schools are so overcrowded and outdated that maintaining a safe distance is impossible.

With the pandemic looming over how the school year will fare, Arriola is crossing his fingers that they’ll be able to remain in person at Brownsville Collegiate.

“I’d be very mad if we went back to virtual,” said Arriola. “A big part about school that I like is being able to make friends, and that’s a lot hard to do virtually, cause all we get to talk about is work most of the time.”