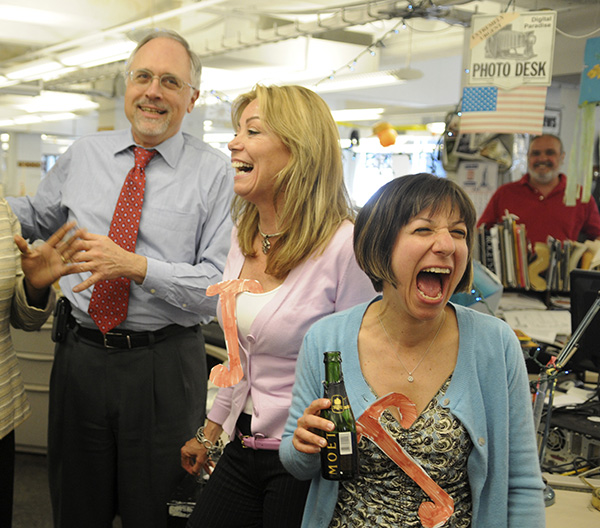 At a moment when cries about the end of journalism reach a high pitch, two local tabloid reporters in Philadelphia demonstrate that gumshoe reporting is still alive and more relevant than ever. Wendy Ruderman and Barbara Lake’s “Busted: A Tale of Corruption and Betrayal in the City of Brotherly Love” is a first hand account of two reporters efforts to uncover wrongdoing in the local narcotics unit. Through their work, Ruderman and Laker prove to pessimists that traditional newspaper reporting still has a place in the changing field of journalism.

The opening lines of “Busted” read like a thriller novel. In a short 242 pages, authors Wendy Ruderman and Barbara Laker, two intrepid investigative reporters with the Philadelphia Daily News, bring readers into the darkest corners of the city where the line blurs between crime and crime fighting. Immediately Ruderman and Lake drop us into the life of Ventura “Benny” Martinez, a former confidential informant for a corrupt Philadelphia narcotics officer who becomes a major source, at a point where the fear for his own life drives him to seek help from these two reporters. “His pudgy, sweaty fingers gripped the handle of a .44 Ruger equipped with an infrared laser to illuminate whoever would be coming for him,” they write. Through the story of uncovering a trail of police misconduct, Ruderman and Laker shed light on a newspaper industry at the brink of collapse, the balance between motherhood and reporting and the stubborn brotherhood that kept corrupt police protected from justice.

In “Busted”, Ruderman and Laker become characters in their own story. Laker, a “sweetheart” who was “oblivious to her ability to make men’s heads turn,” and Ruderman, a “crass” and “pint-size” reporter, become our heroines. They take us into the dusty bowels of the city’s court records where they shuffled through hundreds of search warrants with Laker in “knee high leather boots.” We walk with them from home to home looking for past informants, at one point Laker retelling her account of how she was slapped by Tiffany, another confidential informant. Multiple times through the book, we share their moments of giddiness and excitement as one tip leads to another sordid detail in this network of crooked cops terrorizing the city.

The most novel moments come during the authors’ honest portraits of how they struggled to balance motherhood, dating and reporting. These points in the book remind readers that reporters are not machines, but people who share some of the same insecurities and fears as others. Ruderman describes her son’s jabs at his mom over his frustration that she barely was home. At one point when Karl, Ruderman’s husband, went to the grocery and left Ruderman with her two boys, one asked, “Mom, are you babysitting us?” Laker’s story about how her marriage crumbled before she began her reporting that would lead to a Pulitzer Prize adds depth and sincerity to her character as a relentless reporter.

Their story is as much about their pursuit to root out police who terrorize the community they are charged to protect as the role that “traditional” journalism continues to play in our society. This sub-plot put their reporting in context with the times. As the two reporters pursued a Pulitzer Prize winning story, the edifice of journalism crumbled around them. But the story doesn’t end on a pessimistic note. Instead, it will leave readers with a taste of Ruderman and Lake’s infectious courage and how that courageous reporting will never die, but continue to reinvent itself through new institutions.