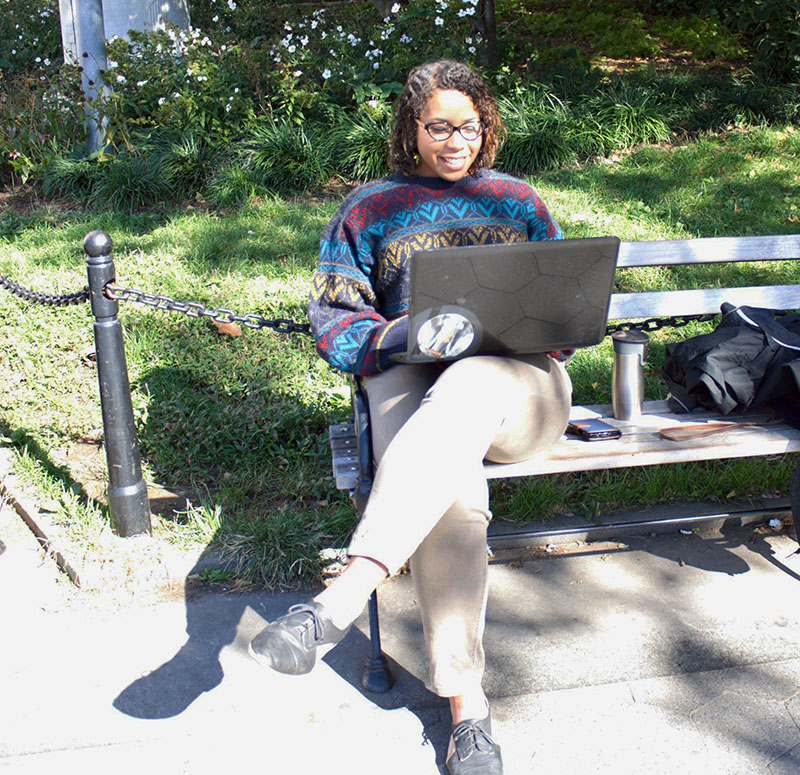 Cicely Shillingford, Canadian expat living in New York, looks into her eligibility to vote in the upcoming Canadian election. Photo by Clare Church

Cicely Shillingford, Canadian expat living in New York, looks into her eligibility to vote in the upcoming Canadian election. Photo by Clare Church

Toria Gibbs, a Canadian citizen living in New York, received a letter from her government in August revoking her right to vote in the upcoming Canadian federal election. Gibbs is among 1.4 million Canadians who will be barred from voting on Monday because they have been out of the country for more than five years.

Special Voting Rules of the Canada Elections Act state that electors living abroad may vote by mail-in ballot only if they intend to return to Canada and they have “resided abroad for less than five consecutive years.” James Hale, Media Advisor with Elections Canada, clarified by email that although these Special Voting Rules were invalidated by the Ontario Superior Court of Justice in May 2014, the Ontario Court of Appeals reversed this decision on July 20, 2015. This means that people like Gibbs, who are living abroad and had the right to vote, lost this right in July, three months before the federal election. Many are outraged by the decision and feel that five years is too short a time to determine voting rights. Others believe the change occurred too close to the election.

“At the time, it felt like a slap in the face,” Gibbs said of the moment she found out her voting rights were revoked. Gibbs is a University of Waterloo alumna, who moved to New York five years ago for a career opportunity. She hopes to return to Canada within the next five to 10 years, when she is ready to start her family.

“I think that a lot of Canadians living abroad have a vested interest in what’s going on in Canada,” said Gibbs. Of the upcoming election, she said that “our country’s reputation is on the line.”
Nearly 2.8 million Canadians are living abroad, according to the Asia Pacific Foundation of Canada. Of these Canadians abroad, more than 1 million live in the U.S. Canadians living abroad can regain their right to vote, if they “resume residency”, said Elections Canada, but not if they return to Canada simply for a visit. The Special Voting Rules state that people are exempt from the “five year” rule if they work for Canadian public administration abroad or for “an international organization of which Canada is a member.” Canadians who have moved abroad for employment or education, are not exempt from the voting restriction. This included individuals who have moved abroad to work for a private Canadian company, or for education not offered in Canada.

Emma Leary moved to New York for her graduate studies and believes that voting rights shouldn’t be determined by the amount of time you spend abroad.

“I think it falls back on your intention to come back to Canada. You aren’t voting for a year, you’re voting for a while,” she said.

Leary, who has been living in New York for only a month, finds it shocking that five years from now she won’t be able to vote. She says that “so long as you retain your citizenship, you should have the right to vote. I know I will definitely be out of Canada for five years, and that’s scary.”
Jessica Penturn, who also is living in New York for her graduate studies, believes that the Ontario Court of Appeals decision was made too close to the election. “

I don’t agree with it; it was announced so close to the election,” she said. For Penturn, who is already extremely disappointed with Canada’s low voter turnout rate, the “five year” rule alienates Canadians living abroad.

Supporters of the “five year” rule argue that the elections should be determined only by those living in Canada, as it affects them the most. Chief Justice George Strathy, of the Ontario Court of Appeals, argued permitting Canadians living abroad to vote would “allow them to participate in making laws that affect Canadian residents on a daily basis but have little to no practical consequence for their own daily lives.”

During a campaign event in Calgary, Canadian Prime Minister Stephen Harper justified the “five year” rule by saying “We’re going to make sure that we have, I think, fair rules to make sure Canadian elections are decided by Canadian residents.”

Olivia Nightingale, who moved to New York for education and employment, disagrees. “In theory, I understand it”, Nightingale says of the rationale behind the “five year” rule, “but that’s the point of being born, or at least having citizenship in a democratic country. You should at least be able to participate in the election.”

Penturn has similar feelings to Nightingale. “I understand that if you aren’t a resident, there are certain benefits you don’t get,” said Penturn, “but not being able to vote, is more of a complex issue.”
Unlike Canada, the U.S., Spain, Portugal and Italy have unrestricted voting rights. France goes a step further, by having 11 parliamentary constituencies for French residents overseas. For example, France has a member of parliament that represents French citizens residing in the U.S. and Canada. In stark contrast, 1.4 million Canadians living abroad don’t have any form of representation in Canadian government.

In an era of globalization, Canadians are spread all across the world for opportunities in employment and education not offered in Canada. For many Canadian expatriates living in New York, the “five year” rule just doesn’t make sense. Cicely Shillingford, a doctoral candidate at New York University, said that “if people don’t intend on going back to Canada, they wouldn’t vote anyway.”
Leary, Penturn, Nightingale and Shillingford are all making a point to vote from abroad for the upcoming federal Canadian election, while they can.

“I mean, it’s sad,” said Nightingale “This is potentially the last election I will be able to vote in.”

Within the New York, Brooklyn, and Queens library systems those with a median household income below $50,000 were six times more likely to gain fines and have their card blocked.