CBD is the new non-addictive cannabis cure all

The walls of Brooklyn Smokes are lined with glass bongs, pipes, and a multitude of e-cigarette flavors and appliances. But as people zoomed in and out of the packed vape shop, owner Shafiq Khan hovered around a product that has added a new type of customer to his business, Cannabidiol better known as CBD.

CBD has exploded into the U.S. market, popping up in places like Brooklyn Smokes and the local bodegas found on almost every corner in New York City. The compound is a non-addictive substance found in the plant cannabis and is used to treat ailments from stress and anxiety to cancer.

But as the product continues to boom, many customers and retailers have little to no idea what CBD actually is and does.

“If there’s any category for vape shops, smoke shops and even convenience stores, where you shouldn’t carry something without weeks of research, yeah it’s CBD.” Khan said. “Information is absolutely key when it comes to CBD.” 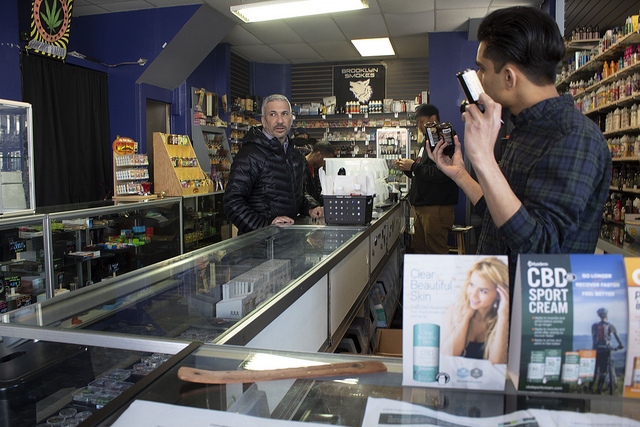 Owner Shafiq Khan shows an afternoon customer some of the CBD products available for sale at Brooklyn Smokes. Photo by Zachary Devita

The common misconception surrounding CBD stems from people’s assumption that the two primary species of cannabis, hemp and marijuana, are one and the same. While both plants contain the CBD compound, the usage and benefits of the two are vastly different.

“CBD as a molecule…has the ability to have positive effects on the body,” said Cory Nick who owns the distribution company Natural Xtract. “CBD is essentially THC without the high. That’s how I describe it to most people and through testimonials it provides relief from stress, inflammation, pain and anxiety.”

Nick who has been in the CBD business since 2015, said he stumbled on to the CBD industry while he was importing e-cigarette products from China. After doing more research and attending some trade shows, Nick noticed the products impact on his customers.

“For me it was because I was helping people,” Nick said. “Even in the beginning, when I started doing my own thing, I started meeting cancer patients and people that had severe ailments and we were testing these formulas and it really provided a difference. And that motivated me more to take it seriously.”

In a study by Harvard Medical School, CBD has been effective when used to treat those suffering from anxiety, insomnia and chronic pain. One of the most powerful treatments CBD has been used for is battling childhood epilepsy syndromes. A variety of studies have found that CBD can not only reduce the amount of seizures, but in some cases stop them altogether.

Both Nick and Khan have bought into the benefits of CBD and credit social media and positive word of mouth for the product’s exponential growth.

“Social media has had pretty much the biggest impact because there really is no other form of media these days for a product like this,” Nick explained. “I mean, obviously there’s TV, but they’re shutting down these opportunities for hemp or cannabis businesses to advertise, so how else do you get the stuff out?”

Khan acknowledged the importance of social media but also stressed that without word of mouth, those suffering would not be able to provide assistance to others who deal with similar afflictions.

“If you have some sort of ailment, whether it be a minor ache or crippling anxiety and you find something that works for you, you’re gonna tell people about it and that’s a powerful thing,” Khan said. “Word of mouth is powerful when it comes to something so new, that is as powerful and helpful as CBD.”

For Kyle Gross, a 23 year old living in Washington D.C., word of mouth was an essential step in her journey to CBD use. While studying for her undergraduate degree at the University of Colorado, Gross frequented the legal dispensaries and learned about the alternative CBD.

“I started using CBD because I’m actually allergic to THC,” Gross said. “If I smoke too often, I get sick with something called cyclical vomiting syndrome. However, the reason why I started smoking pot in the first place was because of health benefits and CBD is a great substitute.”

Thanks to CBD, Gross has found a way to enjoy the positive effects of a substance like THC without the wear and tear of it’s psychedelic properties. She encourages those who deal with similar issues to seek out CBD.

“The health benefits are so great, but it definitely varies by strain,” Gross said. “I use a vape pen and I’ve always had great results. But it really depends on the person and what they are dealing with.”

While the product has had positive impacts for those like Gross, Nick called attention to the legal gray area the industry finds itself in.

“Federally the plant cannabis with high THC levels is illegal,” Nick said. “So the reason we use the industrial hemp is one because of transparency, consistency and quality, but also to be federally compliant in this state and time.”

But Nick also said that the biggest pitfall from the lack of regulation has been the cutthroat competition that sprouts up, along with the lack of knowledge other retailers and distributors have about CBD.

“A lot of this industry is really pay for play and while there is support, the industry as it stands right now is very money driven,” Nick said. “I mean people out there, people assume they know everything about the product, I really don’t like that.”

For Khan, having an informed customer is the most important thing when it comes to CBD. He stressed that other stores should brush up on their knowledge about the product to help avoid the confusion surrounding the extract.

“An educated consumer can tell the difference between shady CBD and reliable CBD,” Khan said. “It’s a new thing and people don’t know how to approach it. You’ve got to be responsible for yourself and a lot of shops that I have seen, they know as little as the consumers do.”