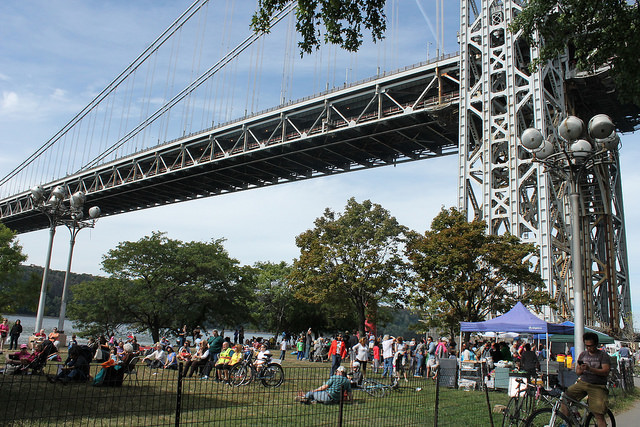 As a 10-year-old, Rose Villanueva snuck into the Little Red Lighthouse in Fort Washington Park, crawling through the porthole and sidestepping glass fragments and garbage before climbing all the way to the top to catch a glimpse of the forbidden view.

Many years after her adventure sneaking into the building, Villanueva returned and visited the renovated lighthouse.

“It’s nice,” she recalled today of the visit several years ago. “It’s clean, you can walk up … you can go through the door.”

Originally built in New Jersey, the lighthouse was taken apart and brought to its current location in the 1920s, where it was in use for barely a decade before the construction of the George Washington Bridge rendered it obsolete. In 1942 Hildegarde Swift wrote his children’s book, “The Little Red Lighthouse and the Great Gray Bridge,” which brought fame to the building, but for a period during Villanueva’s childhood, it was abandoned.

“Bums would go in there,” she said. 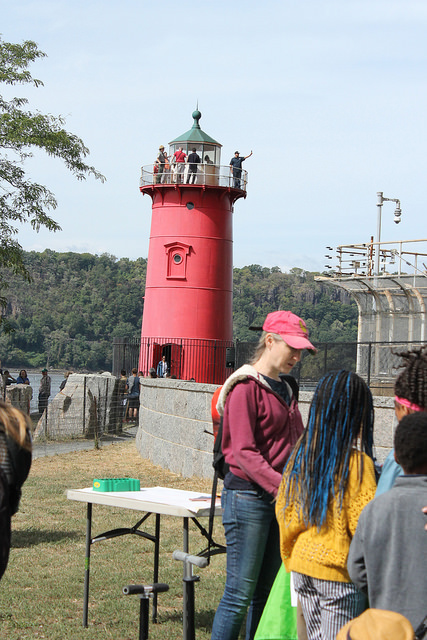 The Little Red Lighthouse, which has not been in use for decades, was the site of an annual festival today. Photo by Karis Rogerson

Today, the riverside park was filled with families for an early fall afternoon outing. Vendors lined the sides of the grass, selling everything from handmade soaps to books while a brass band filled the air with lively music. People mingled with each other, sat on the grass and ate food in paper plates, and many signed up for tours of the lighthouse.

“[The festival] gives people an opportunity to know the lighthouse, the area and to see how pretty it is,” Villanueva said. “It’s a pretty part of the city. It’s not all just downtown.”

Dan Lampen, 35, from Hamilton Heights, brought his son to the park to enjoy the afternoon.

“He listened to the book reading and is enjoying the brass band,” Lampen said. “[This is] a hidden park, I feel like. I don’t know how many people are aware of it.”

Another attendee, Alissa Redpath, 25, from Fort Washington, said the park is her favorite place, although she believes it doesn’t get the attention it deserves.

“I love it down here,” she said. “The recognition of places like this that have kind of been forgotten is really important. The small little parks in the city are really what make up our great city. So I think that anything they can do to bring awareness to the smaller areas that don’t really get that much recognition is really great.”

Redpath loves the park at all times, even after dark when others might describe it as “creepy,” she said.

“It is dark to walk, but once you get down here there’s all the lights of the bridge, you can see the whole city and it’s wonderful,” she said.

“We love the Little Red Lighthouse,” she said. “It’s sort of off the beaten path, there aren’t a ton of people here, which is great. I like the idea that it’s sort of away. You’re not in the middle of Central Park.”

While today’s event was free and open to the public, vendors paid a fee to set up their booths and ply their wares.

Ramona Prioleau, 49, who runs the Harlem-based social enterprise FraMiATi, said the purpose of that fee is one of the reasons she chose to attend.

“The vendor fee is a donation to the park,” she said. “So it’s not really going to line any more pockets. I thought that was a great idea. We’re a social enterprise, so it fit with what we want to do.”

FraMiATi is a soap and hand cream business that donates a portion of its proceeds to nonprofits. They recently partnered with the American Cancer Society to provide soaps to the society’s Hope Lodge. Prioleau, the founder, said the idea of giving back is very important to her, and that impacted her decision to attend the festival.

“This is in the park and for the community,” she said. “It was a slam dunk.”