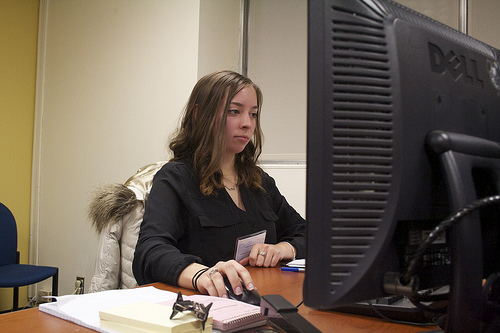 Christina Henriques, a freshman accounting major at St. John’s University, said this program will give her the professional experience she needs to succeed in an accounting career. Photo credit: Leticia Miranda

Christina Henriques, a freshman accounting major at St. John’s University, said this program will give her the professional experience she needs to succeed in an accounting career. Photo credit: Leticia Miranda

Even before the ice thaws and the cold front passes, New Yorkers are gearing up for the impending tax season. Many will turn to online filing services or a trusted tax firm they have used for the last 20 years.

Others will turn to a growing set of university students trained to prepare taxes for the country’s most needy families and their new online system aimed to reach a greater number of taxpayers.

St. John’s University in Jamaica, Queens today launched an online-based program intended to make it easier for local low- and middle-income people to file their taxes. The city’s program, called Virtual Volunteer Income Tax Assistance, partners with Food Bank NYC sites across the city to reach potential taxpayer clients. Families who made less than $50,000 and individuals who made less than $20,000 are eligible for the program. Those sites scan their tax documents into a secure web server, which is then fed to the virtual center based at St. John’s. At that point, the student volunteers process their tax information. In turn, students get hands-on accounting experience in taxes.

Traditionally the program, run by the Internal Revenue Service, depends on in-person and paper-based tax preparation. In the past, students met face-to-face with taxpayers at intake sites, which burdened the program with high costs and left some clients waiting two hours or more, according to the City’s Department of Consumer Affairs. The new online-based system is expected to be more cost-effective and efficient.

“I’m thrilled,” said Nina Dorata, a professor in the Department of Accounting and Taxation at St. John’s University. “I expect the productivity of the students in this virtual setting will just skyrocket. We’re looking forward to a very productive tax season.”

Since 2009, professors like Dorata, in partnership with Food Bank NYC, have funneled nearly 500 student volunteers into the program at the university. In that time, St. John’s University students have prepared taxes for close to 4,000 low and middle-income families and individuals in New York. Since the program began in 2002, it has filed about 400,000 tax returns on behalf of low-income New Yorkers resulting in $700 million in tax refunds, according to the Department of Consumer Affairs.

In New York, Dorata’s remarks are hardly an exaggeration. Roughly 1.6 million New Yorkers live below the poverty line, according to the Census. About 1.4 million residents — mainly women, children, seniors, the working poor and people with disabilities — rely on soup kitchens and food pantries to eat, according to statistics from Food Bank NYC. The group reports low-income families can earn up to $7,649 in tax refunds.
“I worked with 35 clients last year,” said Garvey Jean, a sophomore in the accounting department and a second-year volunteer with the program. “That was 35 households I helped to get a tax refund who really needed it. It’s a really great feeling.”

“There’s pressure, but not too much pressure so you’re not freaking out about the job,” said Cristina Henriques, a sophomore in accounting and first-year volunteer who wants professional experience in taxes. “The supervisors tell us how to do everything step-by-step. They make it really simple for us.”
The students, mainly accounting majors, go through rigorous training before preparing taxes. They are required to pass the Lincoln Learn exam administered by the Internal Revenue Service and complete tax training during the university’s winter intersession.

“Right now there really are no borders on this program,” said Jean. “We’re not just limited to Queens and Nassau County. We’re servicing the Bronx, Yonkers, Brooklyn. This virtual site allows us to help a lot more people.”