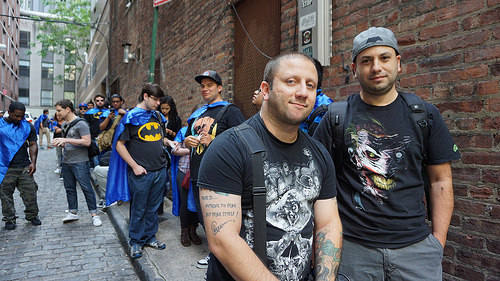 Batman fans Bill Spinelli, left, and Anthony Ceddia, right, wait in a block-long line in Ryders Alley to meet the creators of Batman. They were chosen in a raffle by Midtown Comics to celebrate Batman day. Photo by Sophie Herbut

Some fans are longing for a change.

“I feel comics in general have this problem,” said Thomas Tremberger from Midwood, Brooklyn, about the lack of diversity in lead comic book characters. “It’s so hard to get people invested in [more diverse] characters that until pretty recently [DC comics] didn’t have any faith in.”

Longtime fans of the character waited outside of Midtown Comics yesterday on DC Comic’s Batman Day, to meet the creators of Batman. The line was a block long hours before it began.

Some fans want to keep Batman straight and white.

“There’s room for change without having to change the characters themselves,” Anthony Ceddia of Crown Heights, Brooklyn said. 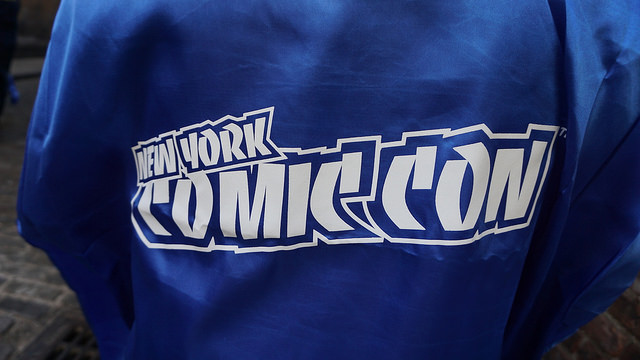 The DC Universe is a web of multiple fictional worlds and dimensions. They’ve used this system to create new diverse characters like a Muslim Green Lantern, black Batwing, and a transgender wedding in Batgirl.

“They’ve introduced a lot of new characters, a lot of diversity, and each character is amazing in their own right and at the same time they’ve never had to change Batman,” Ceddia said. “Which is what I think is great about it.”

These diverse characters have their own stories that run parallel to the original. But these minority characters don’t replace the old characters and they rarely break into the mainstream of movies and television like the Batman has done time and again.

“It’s not really the fans’ fault if they’re not really buying stuff because it hard to be invested in [a new character],” Tremberger said. “You have to sort of build from the ground up to get characters to be like, beloved.”

Tremberger did not think DC’s approach to diversity worked because it kept the minority characters separate and made it difficult for fans to attach themselves to them.

“There’s always room for diversity,” said Bill Spinelli of Crown Heights, Brooklyn. “However, I’d be happy with [DC] going the opposite route of what Marvel’s doing where they need to put diversity into characters that are long established and alienate [the] fan base.”

Marvel, on the other hand, has been making their main characters more diverse. They replaced Thor with a female and Iron Man with a young black woman.

Spinelli preferred DC’s approach to diversifying its characters by creating separate universes and having those gain as much popularity as the original and widely known characters. He said this was the best way to bring in more fans without angering existing fans.

“Is separate but equal ever equal?” Tremberger retorted.

Some fans were more attached to Batman’s character than his appearance.

“[If DC] change[s] him,” said Keith Martinez of Crown Heights, “bring in someone new—a girl maybe—that would be pretty awesome. Some people overthink it a lot. If they change the color of his skin, it still has the same impact.”