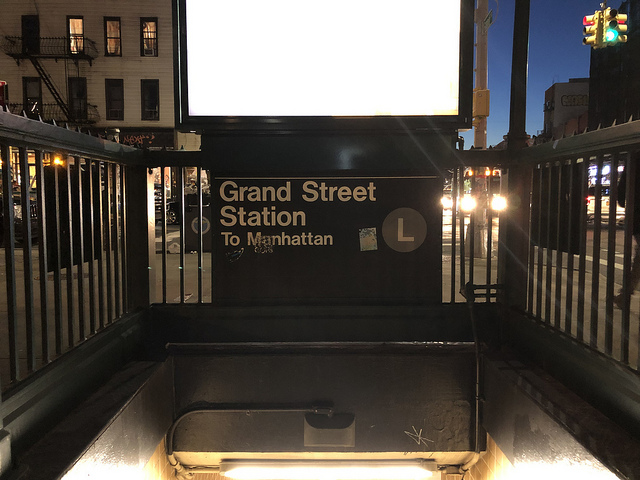 The Grand Street subway  and L train stop will still host commuters since the 15 month shutdown was averted. Photo by Sam Eagan

In early January, New York Governor Andrew Cuomo announced that the 15-month long L train shutdown would not go forward, curtailing years of planning and potentially halting the disruption of 250,000 riders. But some L train riders are suspicious about the MTA’s sudden change in plans.

“Initially I was glad. I spend a lot of time on the L train, I have friends in Bushwick and Williamsburg,” said David Watkins, a Brooklyn resident and NYU research assistant. “ I was like ‘awesome’, but the more I read about it, the more skeptical I got.”

Cuomo’s sudden decision to halt the shutdown comes after 6 years of planning by the MTA. The shutdown was made necessary by water damage as a result of Hurricane Sandy in 2012 and was initially planned to shut down for 15 months beginning on April 27.

Instead, Cuomo says that the MTA will utilize new technology from Europe to keep the train open during the week, and close just one of the L trains two tunnels at a time on both nights and weekends. But the reversal by the MTA and Cuomo, who has often claimed to have no power over the MTA, has left Brooklyn residents reeling and unsure of the future of their commutes.

“Why didn’t they consider this partial shutdown years ago before businesses and rental tenants got scared off of the L train path,” said Tiffany Herring, a Greenpoint resident. “They put over 200,000 commuters and all of the small businesses on a train path through hell for absolutely no reason.”

Thomas Palette, a lifelong Williamsburg resident who grew up off of the Grand Street stop, thinks that Cuomo is just prolonging the inevitable.

“I think he’s just delaying everyone’s plans,” said Palette. “The train was originally supposed to shut down years ago, then they changed it, and they keep changing it.”

Palette isn’t confident that the Cuomo’s new plan is going to pay off either.

“I think he’s just wasting money,” said Palette. “It’s going to take twice as long because it’s only going to shut down at night, when they could just shut it down completely and run free shuttles across the bridge anyways.”

The new plan is expected to maintain 24/7 service, with trains reduced to just four per hour during nights and weekends. Repairs are expected to take between 15 and 20 months, making it comparable to the original plan. But other Brooklyn residents who also rely on other Brooklyn-based lines  are worried that planned repairs and bolstering of other Brooklyn lines, such as the G, will no longer happpen.

“I am concerned about whether or not the MTA will deliver the promised improvements in G train service,” said Tiffany Herring. “They talked about majorly increased service and larger trains and now with the shutdown I’m a bit skeptical that will ever happen.”

It is unclear whether or not the G train and JMZ lines will still receive previously planned repairs or larger trains.

The change of plans has New Yorkers like Watkins worried that Cuomo is pulling a political stunt, rather than worrying about what is best for the city.

“I have no idea if it will work,” said Watkins “I hope so, I imagine that they wouldn’t put forth a plan that wouldn’t work, but with Cuomo you never know. It’s reflective of all the problems the MTA has had over the past 50 years, with politicians just kicking the can down the roadl”