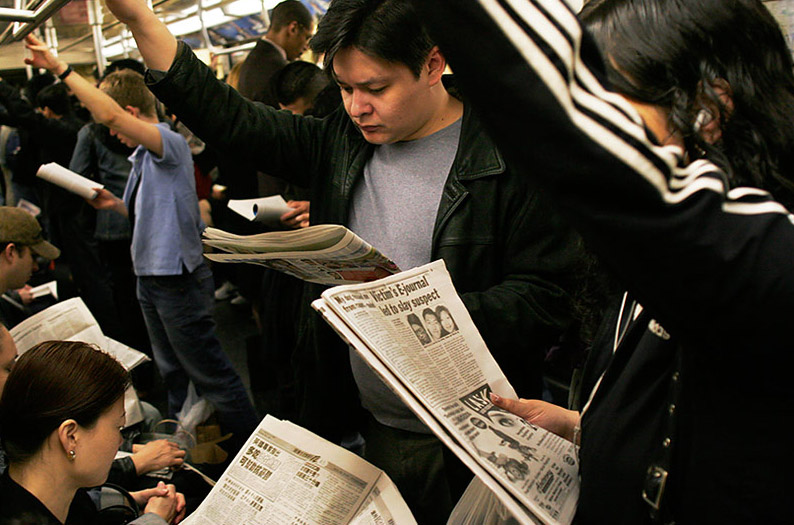 Riders on a crowded subway. Photo courtesy of Wikipedia.

Gridlocked vehicles idle in the streets of Lower and Midtown Manhattan all day every day to the tune of blaring horns. Below the concrete, the human traffic is just as congested as commuters wait for delayed subway trains to arrive.

The city may have a plan to fix this that could either soar or fall flat.

Gov. Andrew Cuomo is backing the city’s latest proposal to raise money for the MTA — congestion pricing. Vehicles entering Manhattan between 60th Street and Battery Park between the Hudson River and the East River will face a fee during rush hours. Cars will be charged $11.52, and trucks or commercial vehicles will owe $25.34. Supporters say this could potentially alleviate gridlock by discouraging drivers while raising money to fix the failing subway system.

“There is no doubt that we need to address the undeniable, growing problem of traffic congestion in Manhattan’s central business district,” Cuomo tweeted. “We need a real, feasible plan that will pass the legislature to raise money for MTA improvements, without raising rider fares.”

Tolls must be fair and shouldn’t vary widely. We need to reduce the costs for outer borough bridges.

As a Queens boy, it is my priority to keep costs down for all hard working New Yorkers, and encourage the use of mass transit.

But subway commuter Samantha Small, 31, of Jackson Heights, Queens does not think that congestion pricing is a good idea.

“At the moment I believe the 59th Street Bridge connecting Queens to Manhattan is the only free way to enter the city via car,” said Small as she waited for the N train at Times Square. “We live in this city and we literally have to pay to go from point A to point B any other means besides on foot. I’m sure raising funds for the MTA will help if they can fix signal problems and do track work, but it will also make the trains more crowded with the same issues because these delays cannot be fixed overnight.”

Dan Brusaferro, 24, of Bedford Stuyvesant stood on the uptown A,C,E platform at West Fourth Street in Manhattan. He believes congestion pricing is a good idea.

“I’m all for the congestion pricing because MTA needs to raise more money to apply to subway improvements,” said Brusaferro. “The crowding from more people possibly taking the subway would eventually be balanced out by the increased amounts of trains the MTA would be able to provide.” 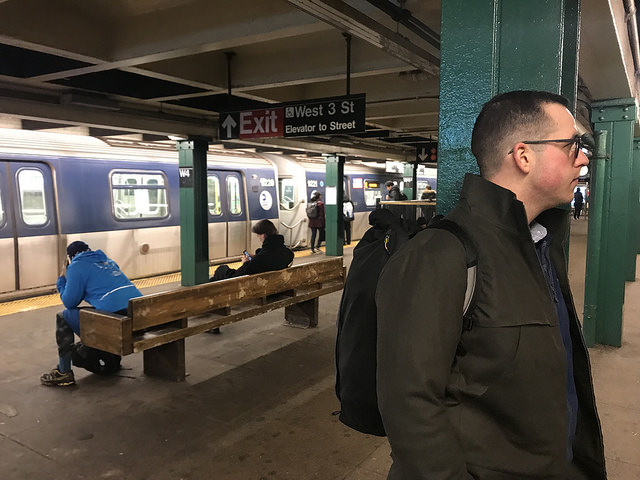 Dan Brusaferro of Bedford Stuyvesant waits for the A train. Photo by Lauren Garry

With more service issues than ever before, commuters are unhappy with mass transit. The MTA acknowledges the subpar service on its website and tries to reassure New Yorkers that there is a plan of action to improve the system.

The MTA did not respond to a request for comment.

But these improvement plans are not helping commuters. Many of them are spending hours a day on the subway.

“I take the D train to commute every day to Manhattan from Brooklyn,” said Wioletta Bujak, 40, of Borough Park, Brooklyn. “Many times there are delays. I go to Manhattan at 4:00 a.m. and go back to Brooklyn around 1:30 p.m. Heading back home the train service is worse. The trains come only every 20 minutes. It takes me two hours one way.”

Long waits between train arrivals are a common complaint from subway riders.

“Brooklyn doesn’t get enough service in the early mornings,” said Brusaferro. “There is a train every 25 minutes. That’s crazy. And because of that the trains are packed when they finally do come.”

At least part of the congestion pricing plan is expected to be in the state budget presented in April.